Wow. I started this post right before Mother's Day. And then we left for holiday in Thailand and then moved to Shanghai and somehow it got pushed down the list. Alas, this is an instance where life got in the way of my plans! So let me just finish up my thoughts and get this out to you!

My Dad was born a blond, but his hair grew progressively darker until it was just shy of black. My Mom was a redhead, as was her mother. I was born with nearly transparent white/blond hair. My little brother was blond, but not quite as blond as I.
﻿

﻿
My hair pretty much stayed like you see it above until sixth grade, when I cut bangs into it so I could be like all the other victims of the 80's and have sky high bangs. While I don't have any awkward hair photos saved on my computer and all my hard copy photos are in storage back in America, you'll just have to take my word for it. I did mine through Facebook for some photos, and this is the only one I could come up with from the 1980's, my 1989 middle school graduation, which isn't that horrible at all.
﻿

In high school, my hair continued to just grow and grow until it was long enough to sit on. We had crazy hair day at school my freshman year and my friend Sam and I used a rinse-out auburn hair dye and lots of mousse to make crazy hair. Sad fact, the mousse rinsed out, but the auburn hair dye? It left my virgin blond hair permanently pink. My high school was in an agricultural area of California with a high Latino population. My blond hair already made me stand out, and the addition of pink hair did nothing to help me blend in. In the late 90's I would have been the coolest kid in school. In 1990 I was laughed at and made fun of by some less than kind classmates. But I did note how much I loved having rust-colored hair for that one day before it turned pink. My blue eyes were bluer, and my super pale skin glowed instead of blending in with my super pale hair. By graduation three years later, my hair was back to being its usual shade of white blond.

After a year of college, I cut off a foot of hair and dyed it a rusty orange. Since red fades more quickly than any other shade, by the time my summer 1996 wedding came, it was back to pale blond again. Every fall I'd repeat the red dye tradition (sometimes it was hot pink, sometimes maroon, but always in the red family), which would fade away by Christmas. I loved fall, and loved my hair then more than any other time. It felt like a retreat from the incessant blond jokes that were so prevalent in the 90's.

When I had my first child, I was certain I would have a red-haired, curly-mopped kid. Every member of both my family and my husband's family have curly or wavy hair. Except my hair, which is so straight it takes a bottle of hair gel and 20 hours in rollers or braids to work up even a wave that will last a few hours. But guess what? I had a blond baby with stick-straight hair. My genes are strong in that one! My curly-haired husband was a blond at birth as well, so I guess it wasn't too much of a surprise. I'll tell you what, if you want to stop traffic, have a blue eyed, blond baby and then move to Japan. I guarantee you won't be able to have an uninterrupted stroll down the sidewalk in his presence!﻿﻿


Child number two came along, and my fingers were crossed for that curly-haired redhead I hoped for. Alas, only half my wish came true. Toddler Ben had stunning curls that I adored.﻿﻿ So did everyone else in Asia who loved to run their fingers through those ringlets and take photos of him while we lived in Hong Kong and visited Macau, China, and Japan.
We moved from Hong Kong to Los Angeles shortly after the photo above was taken, and no sooner had we stepped off the plane did Ben's hair go completely flat. I was hoping it was the difference in humidity... Hong Kong wavered at 95% and L.A. is pretty arid. But the delicious curls have never returned.

I began to notice my natural blond was populated with more and more unwelcome greys. And unlike the beautiful platinum white that my own Mom's hair became as she aged, my grey was dark and ugly and in bold contrast to the pale blond growing around it. I was at a crossroad where I was either going to need to let my hair go grey or color it constantly. Fall of 2006 came, and once again I dyed my hair red. And then winter came, and I dyed it red again. And I've been dying it red, or more of a rusty orange, every few weeks since then. Here's my usual color about a year ago, with my "little" brother. You can see how dark his hair has become in the years since that top photo above when he was four. I wonder if his will end up close to black like our Dad's? 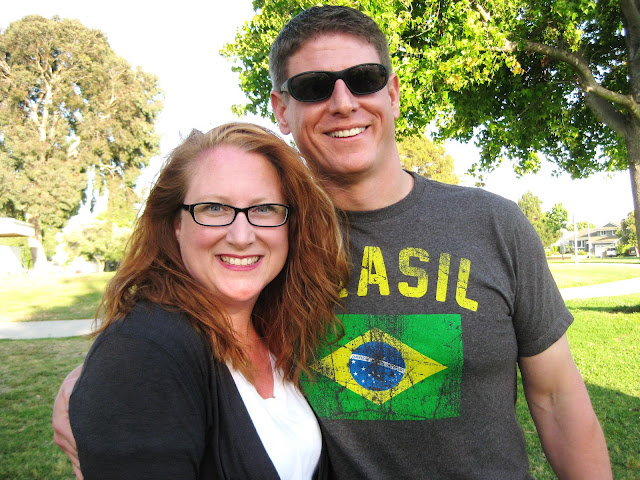 When we moved to Macau, I shipped a year's worth of red hair dye with us. My year supply is now up. In Macau there was quite a selection of imported red hair dye. If I'd been smart, I would have stocked up there. Because guess what? There is no imported red hair dye in Shanghai. Unless it exists outside of the 100+ stores I've looked in with increasing desperation over the last two months.

I did find a Chinese version of L'Oreal Preference here labelled Auburn. Of course if your natural starting point is the classic Chinese so-black-it's-almost-blue, then what you will get is Auburn. If you saw my 4th of July post, you'll see that a starting point of rust with a base of blond and grey will get you Crayola-Little-Mermaid-Red.

Oh well. It's not like I don't already stand out here in Shanghai with my curvy body, blue eyes, loud personality, American accent, and my two boys following me wherever I go. Blending in is boring! The honest truth is my hair grows really fast. And red fades more quickly than any other shade. Three shampoos later and my hair is pretty much the color of my dreams. In general, I'm not all that attached to my hair. I've almost never had a bad hair day because I rarely do anything with it other than let it fall around my face or put it up in a loose ponytail. I tried to shave it all off back in 2004 in solidarity with my Mother-in-law who lost hers due to chemotherapy for breast cancer, but she was horrified at the idea and wouldn't hear of it. I hack off about a foot every year or so (and no, don't bug me about donating it to a worthy cause as the coloring and highlights mean no one will accept it).  Keeping it shorter means only one box of hair dye, which is good considering the price here is 2-3 times the price in the States.

Keeping my hair red means I have escaped those nasty blond jokes. I feel the world has grown quite politically correct in many areas, especially race. But being the continual butt of jokes that make fun of my intelligence and mock my common sense certainly mess with my head after a few decades. I think being a redhead suits me better. I'm fiery and passionate and sassy and anything but dumb and helpless. And my husband loves the color. The complete irony of continuing to stay a redhead while living abroad means my friends from the U.K. have their own set of jokes about gingers (redheads) that can be even nastier than blond jokes! 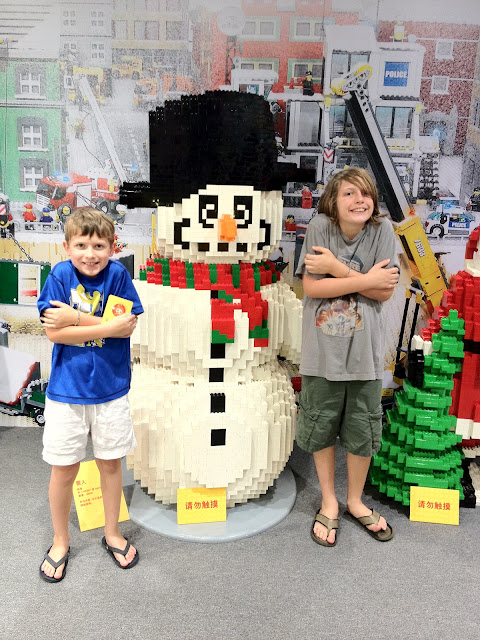 The pale blond locks that Nathan and Ben had as babies have grown darker in the past few years. You can really see the difference in Nathan's shoulder length hair with lighter tips than roots. Funny thing about Nathan's hair being so long... I never thought I'd be the mom who let their boy grow their hair long. Until I gave it a tiny trim a few weeks ago, it was longer than mine.

But here's the thing: my own Mom let me do whatever I wanted with my own hair. She didn't balk at the pink hair, or tell me to cut it or grow it or anything like that. And as a parent, especially intelligent, strong-willed, Nathan's parent, I have to fight a lot of battles. Do I want hair length to be one of them? Nope. No way. Especially not when I'm walking around with Christmas Red hair. I'll save my strength to go twelve rounds over a tongue- or eyebrow-ring or a souvenir Chinese tattoo.

Family members have dropped subtle hints that his hair is a little long (or in the case of my former Marine Corps brother, not-so-subtle hints), but my deal with Nathan is that as long as he keeps it clean, brushed, and out of his face when he's talking to people, he can do what he wants.

Now here's the fun thing, about Nathan and his hair. My friend Rory has a blog called Chocolate Hair, Vanilla Care. Rory and her husband adopted their daughter Boo (nickname for privacy's sake) a few days after she was born. Rory and her husband are Caucasian, and Boo is African American. Rory and Tim have worked incredibly hard to learn how to care for Boo's hair, and created their website to help other parents, either adoptive or birth, care for chocolate hair. I love the blog because in addition to all sorts of amazing hair styles and care tips, there's lots of sciency background on all types of hair and hair products. It's pretty to look at and you'll learn something too!

For the last two years on Mother's Day, Chocolate Hair, Vanilla Care has featured something called Share the Hair, Mama and Me Mother's Day Edition. Nathan and I have participated both years, as the sole mother/son entry. The point is to have a matching hairstyle with your child. In this case it helps to have a boy with long hair! It's fun to see the creative styles people come up with. I had great plans for this year, but in the end we had a particularly hot, humid day that did all the "styling" for us. Click here for this year's post, and then go ahead and click here to see last year's. And then go ahead and add her blog to your reader, because even if you don't have kids I bet you'll get something out of it!