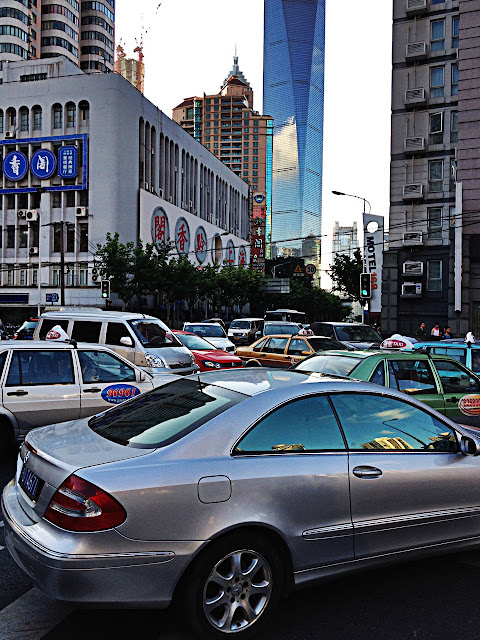 The worst traffic I've ever seen was in the Philippines. Shanghai is bad, but Manila wins for sheer craziness and audacity of the drivers. But gridlock on the other hand? Shanghai is the champion. Every day I see at least one intersection turn into a parking lot with drivers spread all over in every direction, jostling for position, while electric scooters and bicycles fill in any remaining spots. Then the chorus of horns begins, with everyone honking as though through a simple sound they could blast the traffic away.

It becomes especially dangerous for pedestrians to try and cross the street, because should any tiny spot open, the cars will lurch forward into the smallest of openings. I've seen a car hit a person on a bike twice in just the last month (no injuries to the people that I could see, but the cheap Chinese bikes involved looked like crumpled aluminum foil once hit).

I've once been in a taxi that completely bypassed the gridlock by driving us up onto the sidewalk and into a crosswalk. I'm just surprised I don't see that little maneuver more often! Though my boys, ages 11 and 9, hate it, I'm back to making them hold my hand when we cross the street. Or at least link arms. There's safety in numbers. I hope.
By Heather Rose-Chase at July 26, 2012