Everybody dance now! Both of my children have completed all their school work for the year, over-achieving second-born Benjamin a full two months early, first-born procrastination-station Nathan exactly two weeks before the deadline. I'll write more about our school experience later (sorry Cez, I know you ask me every 25 minutes what our process was this year, but privacy and other stuff kept me mum), but for now I'm just rejoicing as much as (okay maybe MORE than) my offspring are.

We get a little break and then all four of us begin the intensive process of learning Mandarin with private tutors who come to our house six times a week. We learned the bare minimum of "taxi Cantonese" while living in Macau (stop here, turn left/right, keep going, name of our flat, name of the movie theater, hospital, please, thank you, OMG, that kind of stuff). I wanted to learn more, but was repeatedly told Mandarin would be more useful. Cantonese is spoken in Macau, Hong Kong, the southernmost parts of Mainland China, and in California. Mandarin (and several dialects that are based on it) is spoken throughout the rest of China, Taiwan, and in the American university system should you elect to take Chinese as your language. Besides being more useful, I've also heard rumor that it's much easier to learn than Cantonese, less tones, etc. I do have to say that Mandarin is much easier on the ears than Cantonese! Hopefully it will be easier on the tongue as well.

In the meantime, my youngest son is turning nine in two weeks. Because he's the one with the heart and kidney diseases and because we almost lost him as a baby, I've always rejoiced in every milestone and birthday that he's had, knowing his (and our) story could have been far different, much shorter. But looking at him now as he's pushing his way from little boy to responsible young man, I'm suddenly flailing about, wishing I could just pause right here for a tiny little bit. But time marches on, and I guess I'll just be dancing with tears streaming down my face. I'll focus on the things we have to celebrate and call them tears of joy, okay? 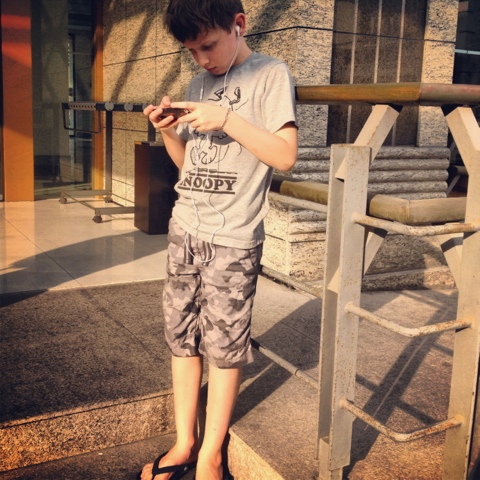