This morning started like every morning does, Michael comes up to say goodbye as he leaves for work, and I reach over and open a curtain to let some sun in to help me wake up. Then I reach down to the floor and grab my iPhone to check Facebook to see what everyone on the other side of the world has been up to while I slumbered. This morning I was faced with very sad news: Ray Bradbury has passed away at age 91.

When I was a little kid, my little brother and I would ride our bikes across town to the Simi Valley Public Library by ourselves every day of summer. We'd check out the maximum amount of books allowed (the total depended on if you checked books out from the children's section or the adult's section but I think it was around 20 books), and then lug them all back to our house, where we'd lay in the family room and speed read through our treasure so we'd be ready to return them and get more the next day.

Side note - my brother and I were/are very prolific readers. When I was 3rd grade and he was 2nd, our elementary school did a Read-a-Thon. For every fifty pages you read, you'd get a big button. I think they only made buttons that went up to 500 pages, thinking no one would read that much. My brother and I read over 10,000 pages and they actually had to go have more buttons made up. We got an award, which I found when we were moving to Macau in a box of childhood news clippings, trophies, and ribbons.

Back to the story - when my brother and I had read everything that interested us in the children and young adult section, we moved on to the rest of the library. My brother discovered fantasy and never looked back. I discovered science fiction which spoke to me like nothing else. And I discovered Ray Bradbury, a couple years before my peers would be introduced to him in school. I read everything by Mr. Bradbury that I could get my hands on. The librarian helped me find big anthologies which would have a single short story of his inside. I re-read his books over and over again. Themes I didn't understand when I was 8 would suddenly be perfectly clear when I was 10. And then reading them again in high school I'd realize there were more layers to be found.

My childhood was transient, I moved schools almost every year (a life which echoes in my current life where we move almost every year). Books were my constant friends, and Ray Bradbury always came along. I loved how his stories were about wild and fantastic things, but at the core was an average everyday "person" who was just going on, trying to make the best of things. That was me. It still is me.

In high school, Ray came to a bookstore in San Luis Obispo, California for a reading right after he'd published Zen in the Art of Writing. I was first in line along with my boyfriend at the time, driving two hours to see this giant of a man. There was a huge crowd there to get books signed. My heart was pounding a little bit when I came face to face with him. How could I say everything he meant to me? I couldn't. I handed him my book and he asked me my name. "I have a granddaughter named Heather," he told me. He signed my book: Heather, Write every day, Ray Bradbury. I lost the book later than year in the messy breakup with the boyfriend who'd accompanied me, but I never lost his advice. I do write just about every day, and when I don't (yesterday for instance) I have a miserable day filled with grumpiness which is hard to recover from.

A friend of mine who I'd met through my in laws is an old friend of Ray Bradbury's. I had great hope that at some point I could have another chance to come face to face with him, have another book signed, one that I would never let out of my sight. To perhaps articulate what he meant to me as a child, a young adult, a writer. This morning I found the opportunity for that is over. How grateful I am that though he is gone, his immense body of work has been left behind for generations to come.

Today I'll honor his passing by reading a creepy childhood favorite of mine to my children. The Veldt is a story of two children and their unhealthy obsession with electronics. Written in 1950, it's quite timely in this age of people more attached to video games and smartphones and Facebook and Twitter than they are to the real people around them (I can be guilty of that as much as my kids, see my morning routine as described above). You can find the story in its entirety here. Join me in reading. 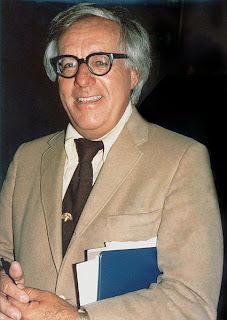 Thank you, Mr. Bradbury, for giving me a childhood filled with stories worth reading, and reminding innumerable people to write every day.
By Heather Rose-Chase at June 07, 2012