Today my youngest child turned nine years old. Wowzers. The view from our living room is beautiful, but look at that boy! Growing up to be quite the handsome fella. 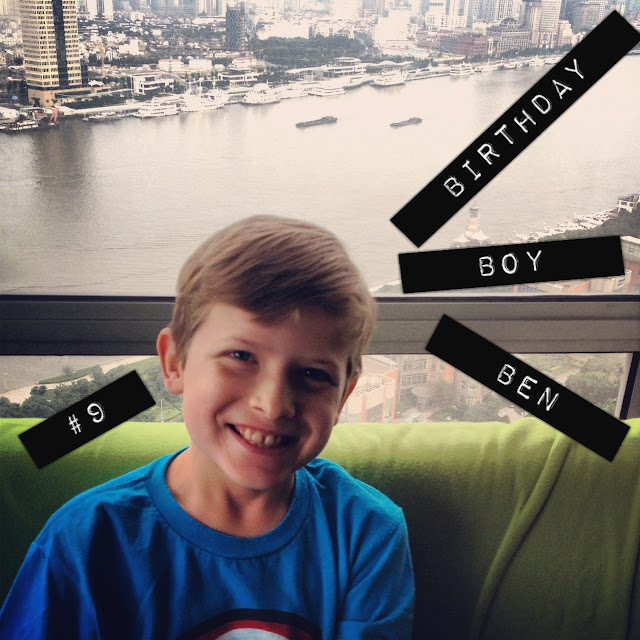 Ben was the only one of us not to celebrate a birthday in Macau. The rest of us got big parties and dinners and breakfast with friends to celebrate our special days. Last year, Michael flew home to Los Angeles on June 30th to collect us for our relocation to Macau, and we spent the day celebrating Ben at Disneyland (Michael got Father of the Year for flying fourteen hours and then spending fourteen additional hours at the Magic Kingdom!). This year we tried to think of something special to do for Ben, since he missed out on a celebration with his buddies in Macau.

Our shipment of household goods arrived yesterday, including all my jeans and sweaters. When we left Macau in May, it was already quite hot and humid, so I only packed shorts and tees in our suitcases. I spent the last month shivering in the unexpected chilliness of still-spring in Shanghai. I predicted that the minute my warmer clothes arrived, the hot weather would finally hit here. And guess what? It did. Toasty! 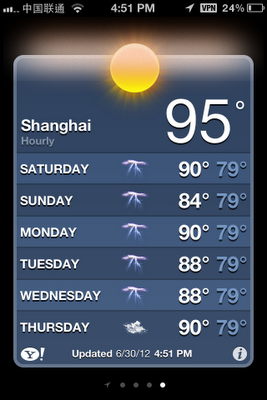 So what did we do? We jumped on the Metro to visit one of Shanghai's Aquariums. We happen to live right next to one, but we chose the one further away for a couple reasons. First, was the penguins, and second was the sweet surprise we had planned for the trip back home.

Outside the Changfeng Aquarium are these huge icons from the 2010 Shanghai World Expo. It's the Mascot, Haibao. This little blue guy is all over town, in random places. This is the largest collection I've seen in one spot, usually it's just one or two. I've been asking the locals about them, and everyone I've asked can't stand them! Ugly, boring, annoying, lacks imagination... their words, not mine! 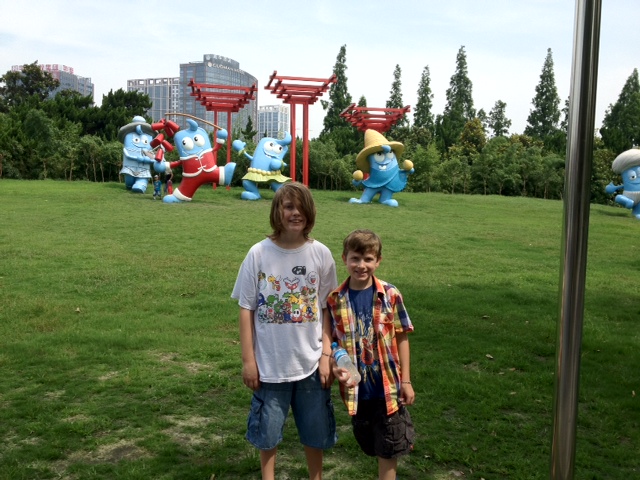 When we lived in Macau, we found that we could never, ever leave the house without bumping into at least one person that we knew. It was just that small. When we moved away, I said to Michael we'd never have that problem here, Shanghai is too big, too many people. Anonymity for all! So imagine our surprise when we got in line for tickets and ran right into our old neighbors from the temporary housing that we just vacated across town! Ben was delighted to have his friend there to tag along. Shanghai is smaller than I first thought! 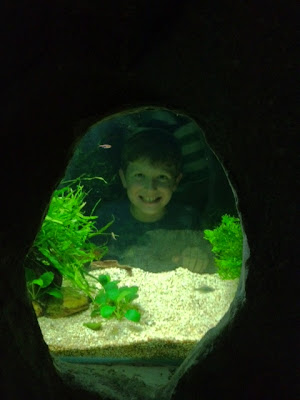 This aquarium is set in a big park that is totally open to the public. You just pay to actually enter the buildings housing the animals. We bought a "Happy Pass" that let us do everything once: Beluga and sea lion show, 3D Movie, simulator attraction, glass bottom boat, and of course the walk through fish exhibit.

The beluga and sea lion show was fun, even though we understood not a word, but the 3D movie was awful! It was called "Sea Dragooon" and we think maybe it was about a wimpy sea horse who falls into a glowing shell and then gets really big and shiny and starts breathing fire and fights this weird crusty-shelled spider thingy that had bad breath. Not understanding the dialog, I could be totally wrong. Michael and I snickered through the whole thing ("Such quality! Great tension!"), but Nathan requested, "no more educational films, Mom." Oh, is that what that was? We watched it with seven other people in what looked like a really run down classroom with plastic chairs to sit in and broken pieces of office equipment stashed in the front corners. See for yourself: 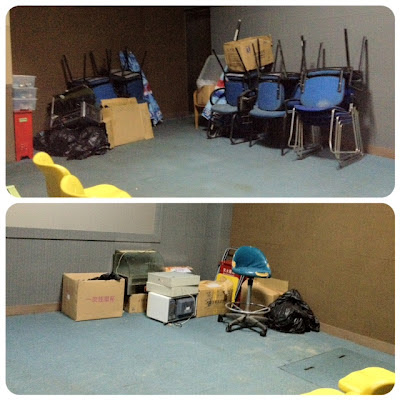 Following the awesome movie, we got in line for the simulator. Have you ever been on Star Tours at Disneyland? Or any of those rides where you watch something on the screen in front of you while the "car" you are sitting in moves around and it feels like you are really doing what's on the screen? (Uh yeah Heather, it's call a simulator). Well anyway, this little simulator simulated us into a grand prix-type race where there were no rules on the road (or of gravity apparently). We were bounced around in a quite painful manner, and when the final scene came (a big fiery car crash), we all felt like the whiplash was real, not simulated! Ouch! Only in China... 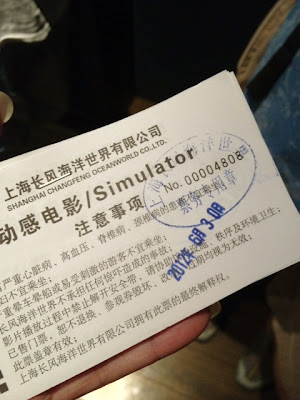 Then it was off to the fish exhibit! Right inside the door was the queue for the glass-bottom boat. This attraction was one of the other reasons we chose this aquarium over the one in our neighborhood. Maybe it was just the jarring of the simulator, but woo-boy, this boat was a little too real for me. We were in a tiny glass dingy, in the shark tank. We were propelled around the subterranean tank by a rope that criss-crossed through the water. And you know what else was criss-crossing through the water? Sharks, of course! They swam right up to us and right under us. This guy swam right against where my back was pressed... I couldn't breathe, let alone take a photo until he was a little further away (you can see his fin sticking up right where the shadow starts). Here is the only photo I took where we got a shark perfectly outlined under our feet. Ugh. The boys loved this part most, though I was completely creeped out. 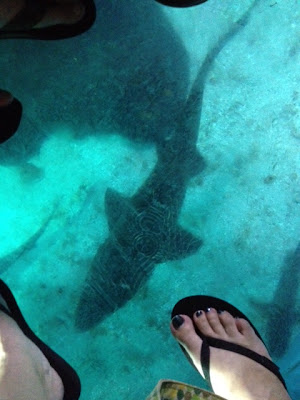 The rest of the aquarium was pretty standard, but there were two glass tunnels through the shark tank where you could look up to see the shark food, er, glass bottom boat filled with other victims above.

Of course, we had to stop and visit the penguins at Ben's request! Though I've never heard of this particular species of penguin: 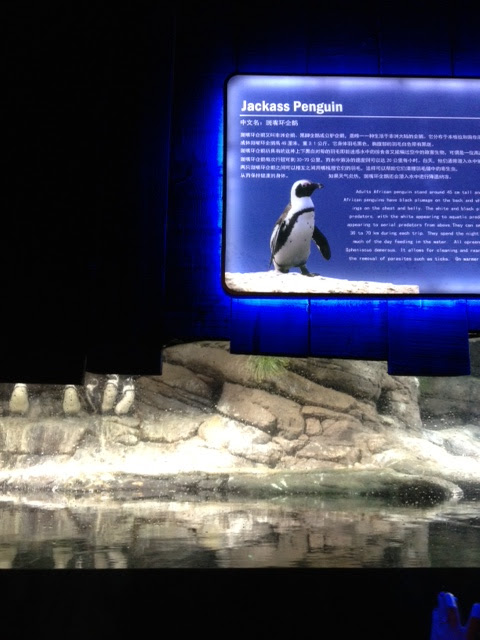 I just looked it up... it gets that name from the braying sound it makes. It's more widely known as the African or black-footed penguin, but I guess the Chinese were going for giggles from my boys.

When we were all done, we crossed the street to a mall to find lunch. The aquarium's ironic offering of grilled octopus on a stick was a little too much for us. But you know what wasn't too much? This crazy contraption at the mall. For $5 USD, your kid got a helmet and a harness and could climb to their little heart's content, as long as they liked. I had enough of helmets and harnesses in the jungle zip-lining though Thailand, thank you very much. I looked up long enough to take this photo, and then window shopped to distract myself while Daddy kept his eyes on our climbing monkeys. 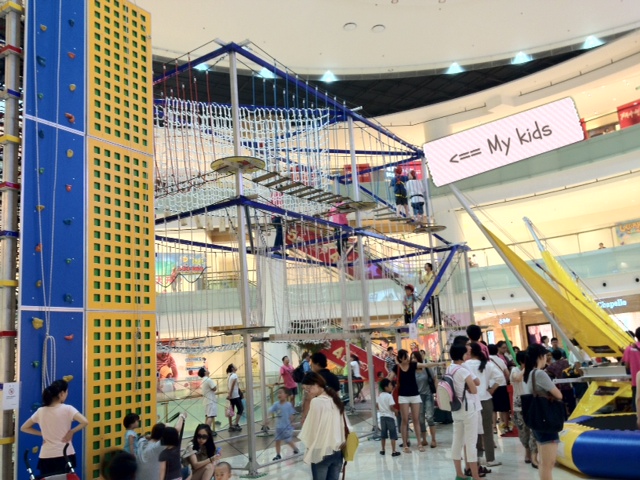 Also in the same mall? About a dozen other kid-friendly activities. Lots of families just hanging out watching their kids play. The boys really, really loved these paddle-boats, as it was nearly 100F and they managed to soak themselves to cool off. My kids were twice the size of any other kid there, but I also think they had twice the fun. Photographic evidence: 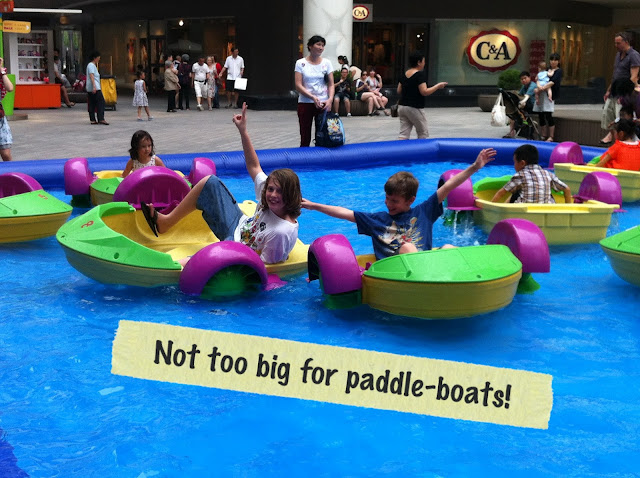 And then finally our big surprise for Benjamin on the way home! In lieu of a cake, we tracked down one of the three Krispy Kreme Doughnut shops here in Shanghai and hand-picked a dozen! The last time we were at a Krispy Kreme was back in November when we were in the Philippines! That adage about absence making the heart grow fonder? Totally true when it comes to sugary American carbohydrates and the Chase family! 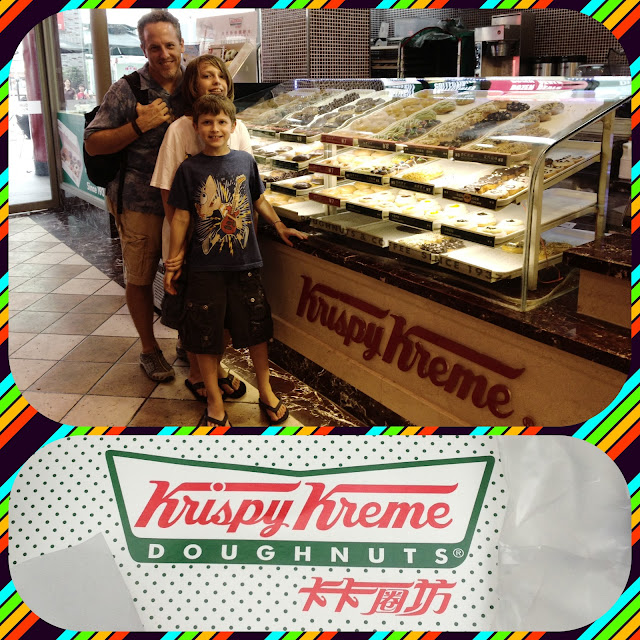 We ended the evening curled up on the couch watching a movie of Ben's choice from our huge collection which just arrived from Macau yesterday. He picked The Chronicles of Narnia: The Lion, the Witch, and the Wardrobe, and along with the dramatic soundtrack, we had a huge thunderstorm and a front row view of lightning all around us, hitting the lightning rods on the buildings that surround us.

My birthday is Christmas Eve, and my little brother's is New Year's Day. Not great days if you want to have any kind of birthday party with friends. Feeling our pain (and witnessing the birthday parties which no one attended), my parents went over-the-top making our days really special. As such, birthdays have become a really big deal to me, my favorite holidays to celebrate (not just mine, everyone's!). At the end of the night I began to feel very bad that we hadn't done enough for Ben. In the craziness of the relocation and our things arriving yesterday, his special day felt a little lost, and I felt guilty about it.

At lunch we told Benjamin the dramatic story of the day he was born, when I had scary complications following his delivery, how his heart defect was discovered, and the heart surgery he had just a few days later. I cried telling him all about how we nearly lost him following the surgery, and how relief isn't a strong enough word to describe how we felt after he came through the scary recovery, finally released to come home from the NICU. I'm sure I tell Ben the same story every year, but I think this is the first time the emotional side of it really hit him. In the end, I'm sure that any birthday activity, celebration, or gift we could possibly come up with would pale considerably next to the gift that we get every year on June 30th - another year of life with beautiful boy Benjamin.