So we still haven't taken a Tuk Tuk for a spin, but we did get to experience another common mode of Thai transportation, the songtaew. The word means "two rows" and it's basically a pick-up truck with a high shell covering the back, which is lined with bench seats on the sides. It very much reminded me of the jeepney trucks in the Philippines, but unlike the garish and crazy colors of its Filipino cousin, the songtaew comes in two colors, red for in town and yellow for destinations beyond.

We'd been told that Chiang Mai is home to some great Mexican restaurants, so with the guidance of our concierge we set off on foot for the one with the best reputation (Miguel's). It was a longer walk than expected (and living in Macau we are used to long walks), but the food did not disappoint, our taste buds and tummies were satisfied. But toward the end of our meal, our kids began to wilt like plucked dandelions after a day riding elephants, so our plans to stroll back to the hotel by way of the night market were scuttled and we decided to grab a taxi. Before we could even look for one, a songtaew pulled up and asked our destination. He said he'd take us there for the standard rate of 20 Baht a head. So we climbed aboard along with a Thai couple and two girls backpacking through Southeast Asia. I felt a little silly when he pulled right into the hotel grounds and dropped us off at the doorman of our luxury hotel behind a string of fancy cars, but you can't beat the price of .60 cents US for a ride home with sleepy children! 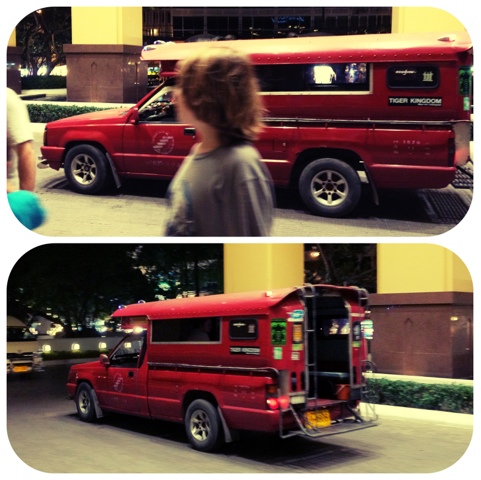