Titanic. And the Newlywed Game. And songs that go on. 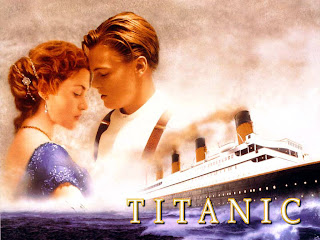 Titanic originally came out in theaters back in 1997, eighteen months after Michael and I were married. Friends of ours had seen it, and demanded that we go see it too. They went and saw it a second time with us. At some point we acquired the DVD, but I never watched it a second time. I remember the merchandise craziness surrounding the film, everyone had a blue, heart-shaped piece of plastic around their necks, and suddenly empire waists were back in style again. "I'm the king of the world," entered everyday lexicon, while Celine Dion's song My Heart Will Go On  became a top hit on the radio and at karaoke bars. Celine's song always makes Michael and I giggle a little bit. Settle in and I'll tell you why...

Little known fact: Michael and I appeared on The Newlywed Game television show with Bob Eubanks in 1997. I love to travel (duh!) and knowing the grand prize on the show was a trip on a fabulous second honeymoon inspired me to force ask Michael sweetly if we could pretty-please audition. We killed during the audition and before we even got home there was a message on the answering machine saying we'd been cast on the show.

The taping a few weeks later was a blast. There was another couple that fought the entire day, including during the taping, which brought a load of laughs to the studio audience. I'd prepped us well by videotaping dozens of episodes so we'd be familiar with the format and have some clue as to what our answers would be. I was disappointed to find that in 1997 most of the second honeymoons the show awarded were to either Hawaii or the Bahamas. We'd gone to the Bahamas on our first honeymoon the year before. And Hawaii is a place that neither Michael or I have ever wanted to visit. But a free trip is a free trip, right? We were in it to win it.

When it came down to the final question (what is your husband's favorite cut of chicken), we were tied with two of the other couples. Not the fighting couple, I don't think a single one of their answers matched! Before asking the final question, they announced where the winners would be sent on their fabulous second honeymoon. We'd been told that our reaction needed to look like it was the only place in the world we ever wanted to go, no matter the destination. And the destination, Bob? The Costa del Sol, in Marbella, Spain. Michael and I did not have to act like we wanted to go there, our reaction was the real deal. After the final question, we were still tied with another couple. I was so nervous. I wanted that trip! The tie-breaker was a number we had chosen prior to the show, predicting the total number of points we might earn. We picked 33 after Club 33 at Disneyland Park in Anaheim, where we both worked at the time. We had earned 35 points, and were declared the winners!

In the many years since our episode aired, it has been replayed over and over, in large part because of the hilarious fighting couple. I remember two different occasions where I walked into a breakroom at one job or another, and there I was on TV with my long blonde hair and purple blouse talking about what part of my body would look the funniest while doing the Hokey-Pokey when I shook it all about (our agreed upon answer prior to the show for any body part question was my hips, but Michael's answer was another set of body parts a little north of there). Five years after it aired we were in Utah at Michael's sister's house, television softly playing in the background,  slurping down late-night root beer floats, when I heard my husband's voice onscreen. We all watched it while I cringed at my high-pitched voice, and reacted the same way I always do when I catch it airing... I scream with excitement over the fact that we actually won!

Our trip to Spain was amazing. We flew first class on Air Europa, and stayed at the five star luxury beachside resort Gran Melia Don Pepe in Marbella, Spain. We collected enormous seashells on the beach. We saw a bull fight. We visited art galleries, swam in the gorgeous pool, ate at little cafes, went up into the mountains.
Our fabulous package included two meals a day, breakfast and dinner. Dinner was served in a luxe restaurant with only five tables, with a private waiter for each table. Center in the restaurant was a grand piano with a pianist who entertained during dinner. Throughout the day he could be found playing the piano in the lobby as well. Our first night at dinner, he asked in broken English what country we were from. We told him and his eyes lit up as he proclaimed, "America! Yes!" and began to play the theme song from the Titanic film. Over the remaining six nights and seven days, every time he saw us he would greet us with a hearty, "America!" and begin playing our "special" song. He played it for us no less than three times a day. By the end of the week, we never, ever wanted to hear the song again! However, in the 15 years since then, we've turned it into our own private song, making up our own lyrics as we go along (generally about mundane things like grocery shopping or cleaning the bathroom), with appropriate dramatic inflection. It never fails to make us giggle.
The 3D version of Titanic just hit theaters in Macau, and Michael asked if we were going to go see it. Uh, yeah, of course we were! We underestimated how popular it was going to be here, and had to wait four days to find a showing that wasn't sold out. Films here tend to come only for a very brief time, so if you want to go, you cannot wait!

I was ambivalent about the 3D part. After all, Star Wars Episode I was recently released and the addition of 3D was underwhelming. But I was looking forward to seeing this epic film on the big screen once again. This time around, the 3D addition actually added a lot to the experience. I read that James Cameron invested 60 weeks and $18 million USD into doing it right, and it showed. And far from being a joke, those solemn notes from the theme song throughout the film were exactly the right punctuation to add to the longing and fear displayed onscreen.

Leaving the theater we remarked how far we'd come in the years since the first release. Spain was the first of many countries we've travelled to together. And in a few weeks we'll be off to two or three new countries, much to my wandering heart's delight. And though the Titanic is often used as a metaphor for something doomed, it cannot be used to describe us! Unlike the couple who originally dragged us to see Titanic in the first place, or the fighting couple on the Newlywed Game who went home in separate cars, we're still going strong, never letting go. June marks sixteen years of marriage for us. I credit our longevity to making up silly lyrics to popular songs, and singing them to each other on a regular basis. Which is to say that laughter makes everything better.

And now I simply must bring you the video of the song that started a million other verses in our household! Enjoy my friends. And go catch Titanic 3D while you can. But avoid getting the large drink. It's a long movie, people.