Eight years ago, our family of four flew to Florida to join up with Michael's youngest sister, her husband, and their daughter, who drove down from Virginia to share a rented house for a week so we could all go to Walt Disney World.

It was late August, hurricane season, and there were plenty of warnings of storms headed our way. We figured as long as the parks were kept open, it was safe to visit them. It turned out to be a good call in the short run, as the theme parks were all empty. The smart locals stayed home boarding up their windows and buying batteries while we played. For Michael's birthday, we went to Universal's Islands of Adventure theme park, home to Dr. Seuss Land, the new Harry Potter Land, and much to the adults' delight, lots of big coasters! As the day wore on, the storm warnings grew more urgent, and though we still had a few days left on the trip, we went back to the house to see if we needed to leave on an earlier flight. After spending hours on the phone with Delta, we discovered all flights in Florida we're grounded in preparation for Hurricane Ivan's eminent arrival. Our best bet was to drive from Orlando to Georgia and catch a flight from there. So we got in our rental cars and joined half the population of the state of Florida who were doing the same thing.

Driving up the highway, going no faster than 10-15 miles per hour, the radio was calling all the people fleeing Florida "refugees" while the hurricane was gathering strength. Gas stations were out of gas, rest stations were clogged with people, diners were out of food, and our children snoozed the night away while each couple took turns driving their car and trying to stay awake. The hours and hours of barely moving got to me, and I became car sick for the first time in my life. In the end, we barely made it on time to catch the last flight out before Georgia's airport was grounded too. I felt like a refugee when we climbed aboard our plane!

Michael and I were exhausted after a full day at the theme park and then a full night and day of driving. We curled up in our airline seats ready to snooze, only to find our children, who'd had a great night's sleep nestled in their car seats, were wide awake and ready to play. At 15 months and nearly four, our kids could have taken down that plane with their youthful exuberance alternating with dread of spending another six hour confined to yet another chair. But we managed to stay awake and in control of them until we landed back in Los Angeles and collapsed. I'm exhausted just thinking about it! But you know what? That trip actually ranks up toward the top of my favorite travel experiences. No lie. Everything was out of our control and we just had to hang on and go with the flow. It was crazy but memorable, and gave us all a great story to tell.

I posted yesterday how I was off to Hong Kong to collect my friend Lori who was flying in from Los Angeles. Turns out her flight in LA was delayed, which caused her to miss the last connecting flight out of Beijing. Not knowing she'd missed the flight, I was on my way to the Taipa Ferry Terminal. In eight months of catching at least two dozen ferries, we have never had to book our tickets in advance. Sometimes we've had to wait up to an hour for a ferry with four available seats, but generally you can walk on right away.

Easter weekend from Friday to Monday is a four day public holiday. Evidently everyone in the region used this holiday as an opportunity to come or go from Macau! Which means every last ferry from Taipa to Hong Kong was sold out for the day. I grabbed a taxi and booked it over to the Macau Ferry Terminal while frantically calling Michael to see if he could find any tickets online for the other ferry company. He found one ticket, just as I pulled up to the Macau Terminal, so I just ran in to book it myself in person. Running to the cashiers, I noticed them putting up Sold Out signs there as well. I pushed my way through to the only open person, who told me she had one Super Class ticket at about three times the normal price, cash only. I dumped out my wallet on the counter, and came up with EXACTLY the right amount to ensure I'd get that last ticket. She turned her Sold Out sign over and handed me my ticket for the 7:10 pm ferry.

Super Class was nice, I got to board first, exit first, and they gave me a sandwich, yogurt, cake, and a chocolate Easter egg which I couldn't eat owing to the fact that chocolate gives me miserable migraines. But it was a nice touch!

I got off the ferry in Hong Kong and checked my email to find Lori had missed the flight, was granted a temporary visitor visa to China which would allow her to leave the airport, and was being put up at a hotel at the airline's expense... With another traveller! So instead of heading to the airport, I took the trains and then bus to get to the Disneyland Hollywood Hotel, our planned sight for the epic girlie slumber party we had planned. Lori was still having a girlie slumber party, but with a total stranger who didn't speak a word of English! I had a long bubble bath and enjoyed the absolute silence that happens only when I'm not traveling with my boys!

The last time I heard from Lori it was to tell me her morning flight number. But when I checked that flight number, it wasn't flying into Hong Kong at all! Through a little detective work, I figured out the most likely flight she could be on, and now I'm hanging out at Hong Kong International Airport, hoping to see her radiant but tired face really soon!

Michael and the boys are on a ferry right now, heading to Hong Kong to join us at the hotel. They'll swim in the awesome pool while Lori and I race around Hong Kong trying to make up for lost sightseeing time. Or, napping. Whichever! We head to Hong Kong Disneyland tomorrow, which will be awesome to experience with my Disney fanatic friend!

So excited to be a part of the story Lori will tell about her crazy trip to Asia! 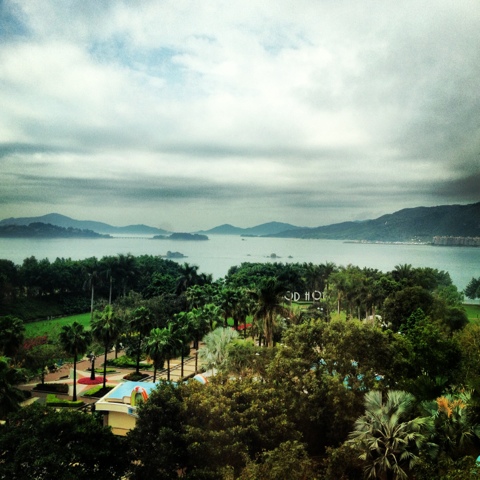