Last night we made a special trip to a grocery store on the far side of town that always stocks popcorn kernels. Though microwave popcorn is available all over the place here in Macau, Michael prefers to make his on the stove top. We'd planned a movie night to take advantage of watching some of the non-pirated DVD movies I purchased back in the States, and the three guys in the family can't watch a film without popcorn!

Popcorn in hand, we made our way back to the bus stop to catch a ride home. We'd also picked up ice cream, so when an empty taxi pulled up along side us, we hailed it for a quicker ride home. The driver took us two blocks, pulled over, shouted something at us in Chinese, exited his car while it was still running, and then high-tailed it into a 7-11 on the corner.

We sat there perplexed for a moment, and then came down with a ridiculous case of the giggles. Michael plucked the CB radio off the dash, and made like he was going to talk into it, which made my laughter so much louder. We couldn't see him inside the 7-11, and normally they are not known for having public restrooms, but we can only assume that is what he was in need of. Because when he finally returned, his hands were empty. Let's just hope they were clean! 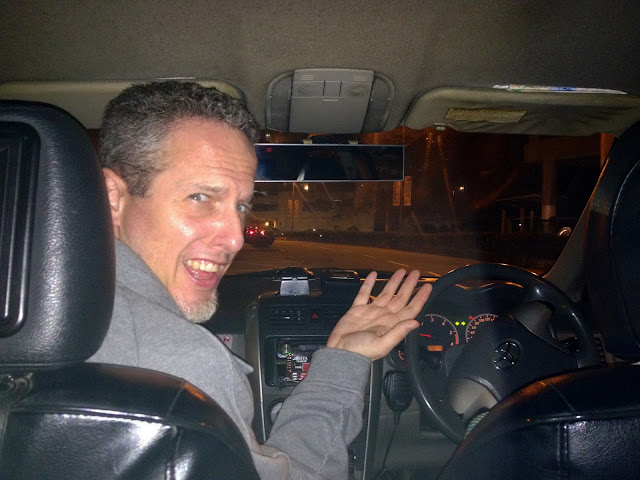 We were thisclose to having a taxi of our own, people. Except we would have had to figure out how to drive on the opposite side of the road. And how to steal a new license plate. And cover up the taxi number. Okay so maybe a life of a crime isn't for us. But a life of laughter sure is, and this guy abandoning us in the road with his motor running was quite the comic relief. I'm just glad it wasn't a bomb or something!
By Heather Rose-Chase at March 07, 2012

Email ThisBlogThis!Share to TwitterShare to FacebookShare to Pinterest
Labels: Transportation