I took the kids down to the Galaxy Resort on the Cotai Strip because they'd announced they were giving out free movie tickets to the Dreamworks Animation film, Puss in Boots (which is released here on January 21), along with 3D glasses, and another surprise gift.

In America, if you see a 3D film, they give you the glasses along with the ticket, and you toss them in the recycle bin on your way out the door. But here in Macau and over in Hong Kong, you actually have to pay for them, and you're expected to keep them and reuse them. So you hang onto them. They don't last too long. As soon as they are scratched or smudged, they're never really the same. So if someone is giving them out for free, I'll get in the line with my hand out. We met up with friends who work for the Galaxy and their kids, who were there for the same thing. I tried to take a group photo, but only the boys would get in the photo in front of the Chinese New Year decorations. 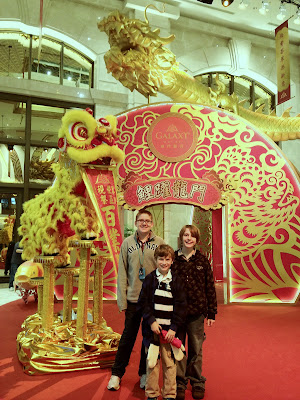 The advertised 6:15 p.m. start time came and went. We noticed some incredibly hip youth hanging out in the same area where our line snaked around the walls of the enormous lobby. They took photo after photo of each other in different combinations, doing different poses. Watching them I realized I was never in my life that cool, nor will I ever hope to be. 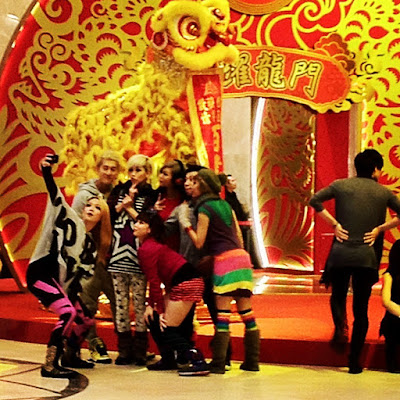 Security guards and Galaxy employees kept reminding all of us to stay in line, but this growing group of roaming trendsetters were allowed to wander around. Made me wonder if they were going to do something. Which of course, they did. I thought I was just taking a photo, didn't realize I'd toggled the video button on my phone. (Video below if you're getting this via email.)

I think they were attempting a flash mob. Several members of the group were trying to hang out and look casual until right after this clip starts. However it didn't fool anyone! They were obviously not part of the bedraggled and rain-soaked tourists from mainland China waiting in line for free 3D glasses. Now if they'd actually blended in and queued up with the rest of us... Nah. Way too stylish. Our favorite part was the end of this clip, with the guy bouncing up and down on one hand.

But the best part of the evening was when this little guy came out, before the dancers took the floor. 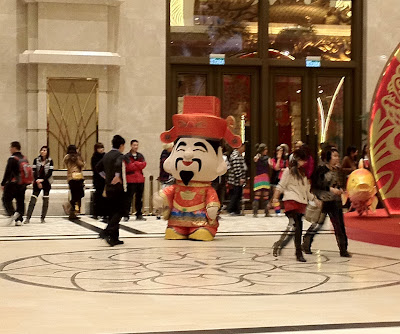 That's a person inside an elaborate foam costume, kind of like what you'd see at Disneyland. Only way more stiff and awkward. He shuffled his way across the room with the help of several handlers. His giant head kept tilting backward, and he'd start to tip over. The handlers would always grab him and set him upright again. I told the boys I'd give them each a dollar if the poor fella ended up flat on his back. My oldest asked why I would reward them for someone else's misfortune. Um, because it's funny? No? Not good enough? Okay kids, you're officially nicer people than your mother! He stayed right in that spot the whole time, flapping his arms to the music while the dancers circled around him. He never fell over though, thanks to those comedy-killing handlers!
We got our glasses, and the surprise gift ended up being huge boot-shaped Christmas stockings. Which was completely appropriate for the pre-Christmas U.S. release date of the film, but kind of silly now. Guess we're getting a jump on next year!
By Heather Rose-Chase at January 15, 2012