We had a lot of people streaming through our humble abode in November and December. We hosted a total of ten overnight guests, a Christmas party for 30, several dinner guests, and a group of regulars who come over every Wednesday to watch a show with us. Every one of them commented on our huge Christmas tree (a rarity in Asia as most flats are tiny and lack storage, so a tiny tree is more appropriate) and the decorations throughout the house. I'm one of those people who would leave them up all year if I could.

In Manila, I discovered people in the Philippines leave up Christmas decorations for all the "burr" months. I thought that meant the "cold" months, but it never gets cold there! It's actually the months ending in ber, September through December. I may claim that for my own next year! But for this past season, I'd decided everything should come down Tuesday December 27th, since Michael had the day off. After talking about this plan, one of our regular guests insisted that the most appropriate day to remove all the festive decor is January 8th. Not sure why (her birthday is January 9th, so maybe that has something to do with it? Goodbye Christmas, Hello Birthday? She's from Australia, maybe it's a tradition there?). Whatever the reason, we did as instructed and left it up until today, in her honor. Happy Day-Before-Your-Birthday, Anni!

I thought I'd share some photos with you. I still haven't photographed the entire flat to post a house tour, but this will give you a little peek at our digs, all decked out in their holiday finest! (One side note... our flat came furnished. The furniture itself is far away from my normal style, which is decidedly more contemporary. After seeing the decorating horrors in some of the other flats Michael looked at, I'm not complaining one little bit.) Here we go:

Oh Christmas Tree! Since the lowest tree branches actually rest on the floor, we decided to put all the gifts under the glass in the coffee table. It was quite festive. You'll have to imagine it, since this was taken long after the gifts had all been opened! 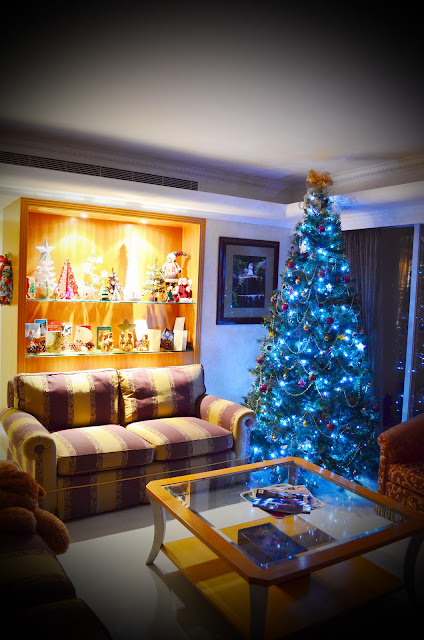 This flat has an overabundance of these display areas. We shipped over one box of ornaments and decorations, but not nearly enough to make an impression on all the open space. So on a trip to IKEA in Hong Kong a couple months ago, I saw the red felt tree in the photo and had to bring it home. It's actually pretty big, but the giant shelf dwarfed it. So I picked up all sorts of other trees, large and small from every place I visited around town. Now it's more of a forest. We picked up the hand carved wooden Nativity set in Manila. I've never actually owned one before. We're leaving this shelf decorated a little while longer. Know why? This week we've received a flood of Christmas cards from the States to add to what you see in this photo. And since nothing makes me happier, I want them around a bit more. 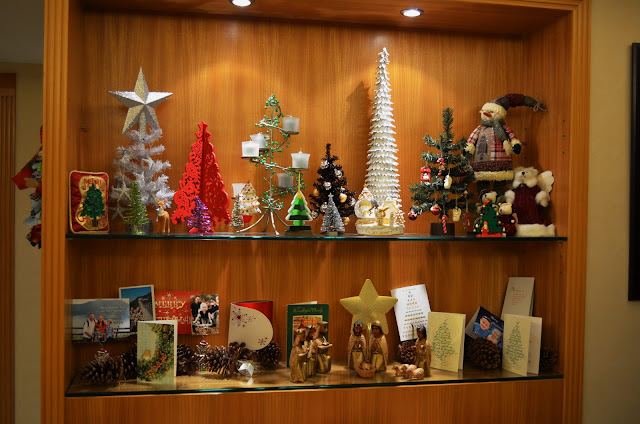 We live in a high rise building, so no chimney with mantel to hang our stockings on. As I mentioned before, they're really more decorative than anything, so I put them front and center, along with a Christmas counted cross stitch that my mother-in-law made for us that actually hangs in our home all year long. 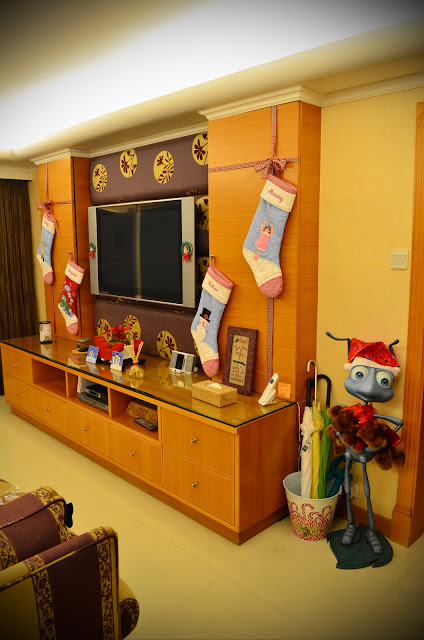 And then there's Flik. He's been with us since 1997, when Michael toured with Disney to promote Disney/Pixar's A Bug's Life. The lucky bug has gone on to tour the rest of the world, courtesy of the Chase Family and our incessant moving. He was one of the cast-off set decorations, with one leg longer than the other and missing an arm. In 2001 Michael was the technical director for American Musical Theatre of San Jose. His head scenic painter, Renee, saw a photo on his desk of Nathan with Flik (they were both the same height then), and being the awesome artist that she is, sculpted a second arm for him and added a leaf stand so he could stop leaning. Now we subject the poor fella to all sorts of injustices depending on the season (here's his photo last year). Strangely enough, Flik is also a very effective predictor of who will go on to be good friends of ours. If you walk in the door and proclaim, "Eeew! Why do you have a three foot ant in your living room? That is so weird/gross/icky," there's a good chance our friendship just won't work out. You probably just won't get us. But if you come in and squeal with joy and ask to get your photo taken with Flik, then you're like family. Immediately. Even if I just met you. 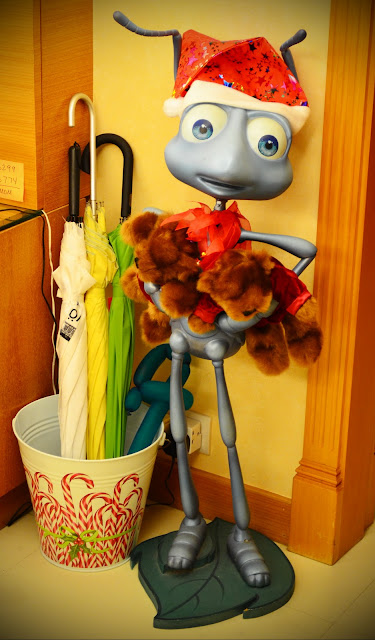 During the holidays, every craft store in the States (and even a lot of grocery stores) will sell you a mesh bag filled with cinnamon-scented pine cones. I always have a basket of them by the front door so guests are greeted with a spicy/sweet smell. But can you find them in Macau? No, you cannot. You can't even find cinnamon-scented essential oil to make your own. You can't even find pine cones (emphasis on you). Because I bought up every single pine cone, from the single store I found selling them. Considering you can normally scoop them up in California parks for free, it was hard for me to pay for them. But I put them all over the house and it felt like home to me. 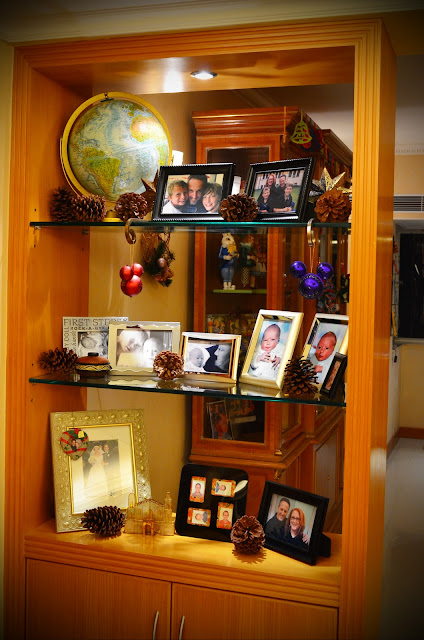 And finally, the dining room. See the Alice in Wonderland collection? This is probably 10% of everything I own. But if we're going to be here for many years, I want to be surrounded by the things I love. When I saw the photos of this flat with its giant display case, I knew just what to put in it. I found all these brightly-colored felt ornaments that seemed very Alice to me, and hung them all over the dining room. I included this photo because I wanted to point out the three wise men on the top left shelf. My parents recently moved away from California, and last Christmas my Mom was getting rid of a lot of things she didn't want to move. These guys were in the give away pile. I flipped out. After all, they were a backdrop to every childhood Christmas I can remember. They are such odd little men, made in the late 1960's/early 1970's and big on quirk. No way I was letting them go to some stranger or the trash collector. So I wrapped them up to take home. My Dad saw this, and he flipped out. He had no idea Mom wanted to get rid of them. I promised him I'd take extra good care of them. So instead of moving them across the United States with my parents, they moved across the world with me. And like Flik and my mother-in-law's cross-stitch, they stay out all year long. 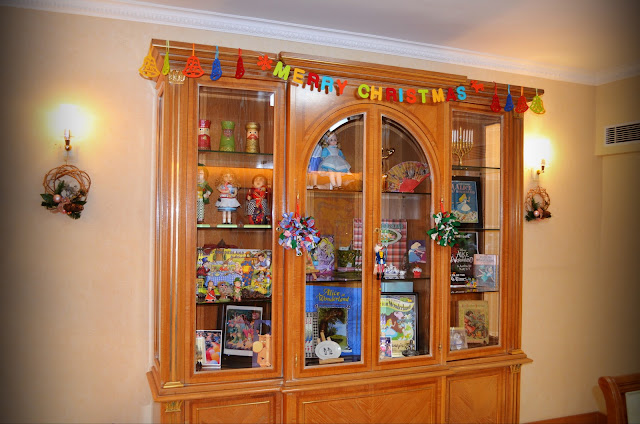 Whew! That's it for Christmas, folks! There will be more where that came from in about ten months. I've got big plans already...
By Heather Rose-Chase at January 08, 2012