I think it takes moving far away from everything you're used to before you see which traditions actually stick. With us, there isn't much. We don't even have a Christmas tree every year, especially if we know we're going to be away that week. We just go with the flow and focus more on making memories as we go rather than trying to repeat something that is familiar for the sake of familiarity.

A few years ago, I was lamenting loudly over not having any Christmas traditions that carry on from year to year. This really bothered me because I felt like there really needed to be something my children would hold onto and pass on to their children. We don't even do stockings... I purchased some half-price from Pottery Barn a couple years back, and we hang them, but you'll never actually find anything in them Christmas morning!

I was in the middle of my outburst over not having a constant to come back to during the holidays when Nathan, my oldest, piped up and said that we did indeed have a Christmas tradition - we put on a show. This is very true. Since my earliest childhood, I've always been part of some sort of winter holiday production, either through church, school, the community, or professionally. This continued after marriage, and after kids. Together we've been doing something every year that gives back to the community. We create traditions for other people. You know, the people who say they always go see The Nutcracker, A Christmas Carol, or a children's Christmas pageant at the theater in their hometown? Well, we're the people who give up countless hours while everyone else is shopping and wrapping to hold rehearsals and get props and create costumes so there is a show for them to see. That is Christmas to me, and evidently to my children!

This year things were a little different. I didn't do anything to put on a show, though I did support my husband who puts on a show every night. But along with a brave new friend here in Macau (or more accurately, brave partner in crime), I did host a party for two dozen children that involved a night of working with our hands, being creative, and making merry memories. 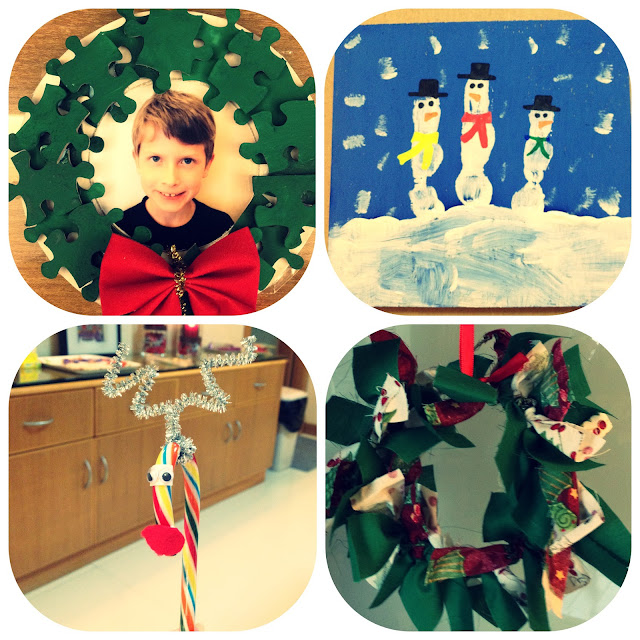 We made a photo wreath from puzzle pieces, a painted hand-print snowman scene, a wreath to hang on the door made from fabric scraps, a candy cane Rudolph, and decorated sugar cookies and upside-down ice cream cones to look like Christmas trees. We also served dinner, watched a Charlie Brown Christmas, and told stories. It was chaotic but fun. My friends back in the States were a bit shocked, as they know I don't especially love working with children (beyond my own of course). However, I do love to put on big events and encourage people to exercise creativity. Everyone loved it (especially the parents who dropped of their kids and ran off for alone time!) and everything was put back together, clean and neat and tidy by the time my husband got home from work. Quite the undertaking! And though it wasn't putting on a show, it was still building memories for other people, which is in the spirit of our lone Christmas tradition.

The other thing that seems to have stuck is making Loaded Baked Potato Soup for New Year's Eve. A few years back I found the most amazing recipe which uses lots of butter and cream. It's so full of fat and calories that I decided we need to only make it once a year. And what better day than New Year's Eve? It stuck, and for the last three years I've now made the same recipe in the Duchess, my beautiful green Dutch oven (and yes, I know there are lighter recipes out there, but they simply aren't the same. This is just a once-a-year thing, so I don't feel bad about the decadence).

This year we had last minute overnight guests who wanted to take advantage of our guest room and the excellent view of the midnight fireworks that it offers, so they got to partake of the annual soup as well. Macau only offers some of the ingredients some of the time (sour cream, LARGE Russet potatoes), and other ingredients not at all (half and half, sharp cheddar cheese). So I improvised. And there wasn't a drop left! I'll share the recipe, but don't hate me if your pants don't fit after you have seconds!

Place the bacon, butter, salt, pepper, and garlic in a soup pot on low heat, stirring as butter melts and garlic lightly browns.

Add ½ quart of Half & Half and 1 quart of chicken broth. Increase heat to medium. Once simmering, drain the water from the UNBAKED peeled and diced potatoes and add to soup pot.

Simmer on medium heat for about 25 minutes until reduced by half.

Add the chives (if you like them), BAKED peeled and smashed potatoes, and remaining ½ quart of Half & Half.

Simmer for an additional 20 minutes, stirring every few minutes.

Remove soup from heat and slowly add the shredded cheddar while stirring constantly.