When I was a little kid, my Dad would use the word bowling in place of the word boring. Mainly because he's a total jock who loves watching all sports, all the time, but found watching bowling on TV to be about as appealing as watching paint dry. Or something like that. As such, going to the bowling alley is not a childhood memory for me. I'm sure I went once or twice, maybe for a birthday party or something, but I don't remember. I do remember making a ridiculous attempt while (I think, pretty sure, sounds right) ditching high school at the bowling alley on the Army base near my house. And again in Tokyo, Japan in 2001, when some local friends decided to take us bowling because they thought that we, as Americans, were probably missing that particular activity while living away from home. Baby Nathan was passed along to whoever wasn't holding a bowling ball. 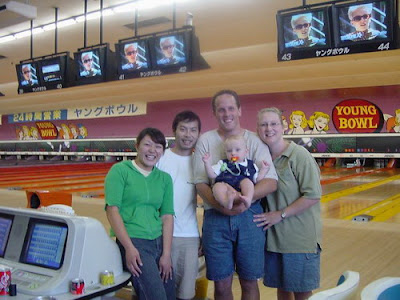 Flash forward ten years and we find ourselves in Macau. A very tiny place. Which happens to have two bowling alleys. The boys went to a bowling birthday party a couple months back at the one on the Macau Peninsula, Future Bright Amusement. In addition to bowling, they have an ice skating rink, an arcade, and McDonalds in the same building, along with being adjacent to the largest city park in Macau, Camoes Garden. Michael took the boys ice skating there last summer, back when I had broken toe number one and couldn't fit my swollen foot into a skate. They had fun, especially when they ended the skating with Chicken McNuggets and an hour in the arcade. They've wanted to go back ever since. After the bowling birthday party in the same location, the boys have really wanted to go back. But there isn't a convenient bus that picks up near us and drops us off really close, so it ends up being quite an ordeal to get there. One that maybe isn't worth the payoff of an hour of bowling. I've been avoiding it. 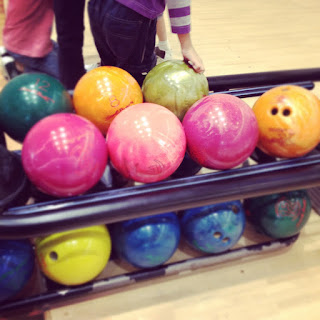 In December, the boys were invited to another bowling birthday party, this time at the Bowling Center, located along the Cotai Strip next to the Macau East Asian Games Dome.

Unfortunately, the day before the second bowling party, Nathan hit his head really hard at the company Christmas party, ending up with a concussion and strict orders to avoid physical activity (and reading, tv watching, video game playing) for 24-48 hours. So he had to sit it out (I let him stay home with the sitter, the thought of watching all the other kids play while he sat was not appealing in the least).

Getting there was a breeze. We picked up a bus just down the road from our house that dropped us off at the front door of the Bowling Center  (Line 50). I was impressed with how new and clean everything was. The only downside to this venue is there is nothing else there. No snack bar, no restaurant, no arcade. Which I thought was odd. And must be the reason why the place is just so darn clean and new looking! Ben had a blast, and I vowed we'd go back as a family on one of Michael's days off. Which brings us to this week. 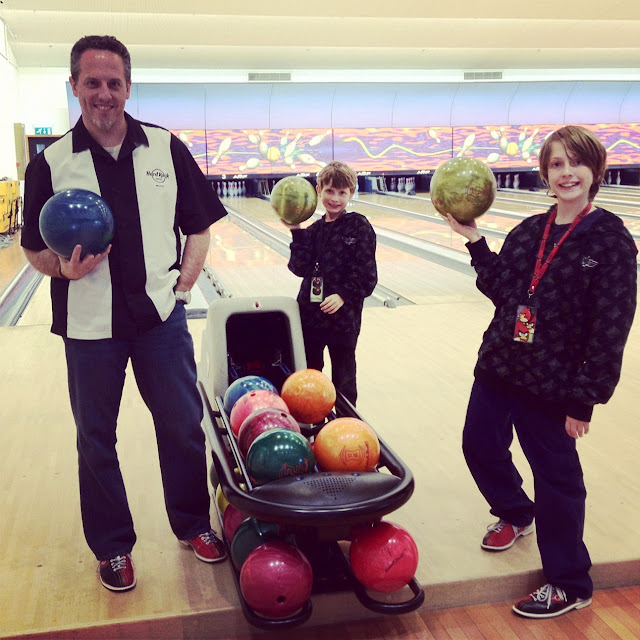 I think this is my favorite picture of my guys. Ever. They can totally rock the bowling shoes, yes?

We played two games. The lane was programmed to bring up the bumpers when the boys were bowling, and sink when Michael or I were up. I think I needed the bumpers more than the kids! Every turn I had at least one gutter ball. I managed one renegade strike, and the three of them cheered like I did something amazing. In my very small experience with sports, I thought strike was a bad thing!

I mainly went around taking artsy photos of the gumball-colored balls and the rad footwear. And looking for the lightest ball possible that would still accommodate my fat thumbs (thanks Dad for passing that particular trait along to me!).

Can I just say one thing? Watching bowling may be boring, but when you're actually playing it with a highly competitive husband and two very enthusiastic boys, it's actually pretty darn fun. 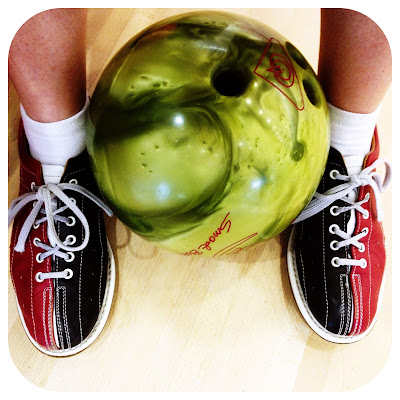 When it was time to go, I made sure to snap a quick pic of our shoes to make it easier next time. The staff didn't speak English and getting the right size killed about ten minutes. I put them in order of age: Michael, me, Nathan, Benjamin. Do you notice what I noticed? 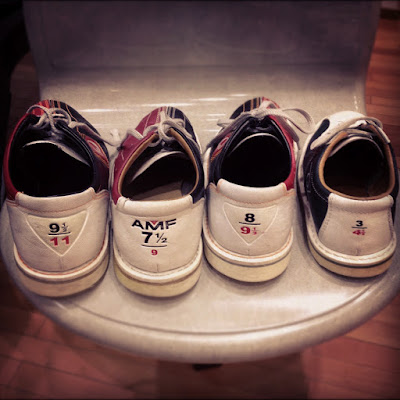 My boy Nathan? Who celebrated his 11th birthday just six weeks ago? The one who is just a pacifier-sucking, barefoot baby in that photo up at the top of this post?
His feet are bigger than mine.
So apologies to my own Mom, who suffered me dancing around and singing when I was eleven, proclaiming to anyone who would listen that my feet were bigger than hers. Ouch.
If you're in Macau and looking for something to do, go check out the Bowling Center. It's open from 9:00 a.m. to 11:00 p.m. One game is 20 MOP ($2.50 USD) before 7:00 p.m., and 30 MOP ($3.75 USD) after 7:00 p.m. Shoe rental is another 3 MOP (40 cents). Can't beat the prices. But bring your own drinks and snacks. Wearing those fabulously hip shoes works up quite the appetite, and they've got nothing to offer you except a water fountain and a soda pop machine.
By Heather Rose-Chase at January 06, 2012

Email ThisBlogThis!Share to TwitterShare to FacebookShare to Pinterest
Labels: Around Town, sports, Transportation