Loss and the Holiday Season

I lost all of my grandparents by the time I was 21. Only one, my Mom's father, survived just long enough to see my wedding, and none of them witnessed my becoming a parent. Most of my cousins are at least a decade older than I am, and they had our grandmother to help them on their wedding day, or to witness babies being born, knitting special things for them. Sometimes when I think about that, and what I missed out on, I grow very sad.

In case you're very late to the party, we move a lot. Like 13 times in 15 years a lot. This can be very difficult on relationships with friends and family members. But I work incredibly hard to retain those relationships. I send postcards constantly. I have a Christmas card list that once topped out at 450 people. And every time we move, for at least the last six moves, I've sent out photo change-of-address cards featuring our new digs and our smiling faces so that people can at least attempt to keep up with where we're at. I blog, email, Facebook, text, and iMessage on a regular basis to keep in touch with the people I love. Sometimes it feels like a full time job, this business of sustaining friendships from half a world away. But it's worth it.

Six years ago, in the time before Facebook, we lived in Hong Kong. I had many friends who were consistent in mailing us little notes and cards. I taped them on the wall in our bedroom, and in six months most of the wall was covered. But no one wrote me as much as this man: 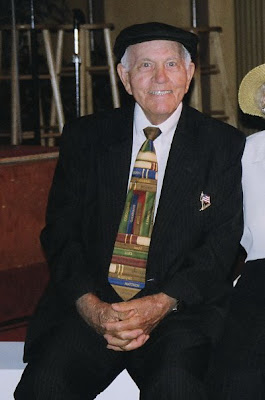 This is Doyle. I ran a little theater group in Los Angeles, and Doyle had been part of it. I would always find roles for him, or write him in, because he was infectious with his enthusiasm and zest for life, and that rubbed off on the rest of the cast and crew. When I moved away, he was a most extraordinary pen pal. I cannot overstate the fact that I love mail. The effort one makes to put pen to paper, find an envelope and stamp, and get it to the post office is a burden in this instant world of email and texting. But almost nothing else in life gives me as much pleasure as receiving mail! Doyle wrote me nearly each week, filling a page with details about anything and everything in his shaky handwriting. Without fail, his letters would come on the days that I was feeling less than enthusiastic about my life in a foreign land. And they lifted my spirits every single time.

Beyond the stage, he filled a role in my life too. He was my surrogate grandfather. He never let an opportunity go by to tell me that he loved me. Moving back to Los Angeles from Hong Kong, the letters stopped because I could just see him any old time I liked. Which was quite a bit. But then early last year, Doyle passed away. At the time, I was completely devastated. I spoke at his funeral, and could not contain my sobs while standing next to his casket. He adored my boys and heaped praise on me as a mother to them. With his death, I began to mourn the loss of all those years I went without my other grandparents, who never got to see the kind of woman I turned out to be.

In the nearly two years since Doyle passed away, the pain grew less and less. Until we moved to Macau. Because when we arrived here, I had this feeling of great anticipation and excitement... I wanted to give Doyle our new address and tell him that he could start writing me again! And that I couldn't wait to renew our pen pal relationship! It was like a punch in the gut when I realized that Doyle had written me my last note three Christmases ago, and that there would be no more. I cried brand new tears.

This month, I cried all over again while pulling out Christmas decorations that we shipped from the States. In his later years, Doyle loved to work with his hands and make things out of wood. In 2006 he made me a tabletop Christmas sled. I forced him to sign the bottom of it, because I wanted to always remember it came from him. He was a humble man, and nearly refused. I'm so glad I insisted. 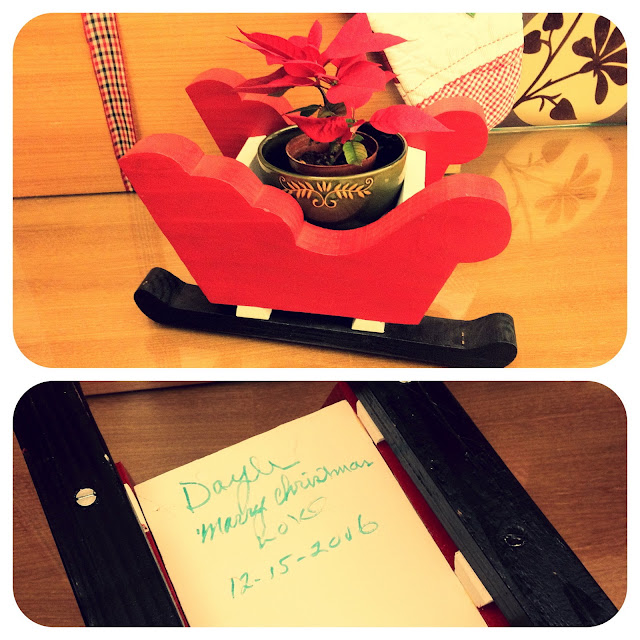 Now I have a little love letter from him that I can keep out on display, at least during the winter season. But I still greatly miss getting regular mail from him. And from everyone else for that matter! Here it is, December 19th, and we've received a grand total of two Christmas cards from friends back in the U.S. We send out hundreds of cards, and generally get about one hundred in return.

I'm wondering if this last move of ours was just one too many for everyone to keep up with. Or if the additional 54 cents in postage on top of the already-ridiculous 44 cent first class stamp is just a deal breaker when it comes to keeping us on their Christmas card list. Or if it's just the thing I hope most of all... that we haven't been forgotten, it's just the exceptionally slow mail that takes 2-3 weeks to get to us. I'm believing hard in that one, because for a person like me who loves mail, Christmas is the best time of year. A stack of cards every single day! What could be better? Hmmm... nothing! But you know what? Even if I only get those two cards, I will treasure them greatly. Because they are both from people who are like Doyle. They both write me frequently, keeping my mailbox from growing cobwebs, and they always tell me they love me.

Now I'm off to triple check my own list, to make sure I don't pass up the opportunity to share some Christmas love of my own!
By Heather Rose-Chase at December 19, 2011