On October 1, 1949, Mao Zedong stood before a huge crowd gathered in Tienanmen Square in Beijing and declared it the National Day of the newly established People's Republic of China. It is a public holiday throughout China, Macau, and Hong Kong. Every city throughout the entire nation celebrates with fireworks, and many have parades as well. Chairman Mao is either revered or vilified depending on who you are speaking to, how old you are, and where you are from- which of course determines what your history books said about him.

On Friday I was walking around town after the rain died down. I noticed people putting up the red flag of China on street corners, poles, and in public squares. I come from the U.S.A. where patriotic citizens put up the American flag for just about any reason, or simply as a matter of pride. In Japan, I was there six months before I ever saw a Japanese flag flying. In Hong Kong, the flag could be found in a few places, but it wasn't overwhelming. In Macau, I see the green flag all over the place. But green is my very favorite color so maybe I see it so much because I look for it. To see the green flag being replaced with the red flag of China, if only for the weekend, was a bit disconcerting. It is a good reminder to me that though Macau is a Special Administrative Region, with autonomy in all matters except military and foreign diplomacy, its heart beats with the blood of China. 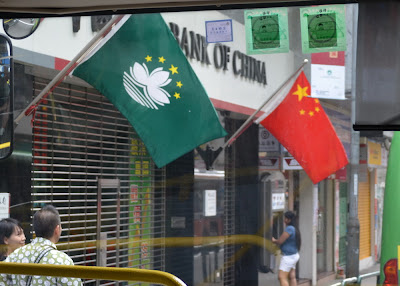 Green flag of Macau, red flag of China. They both have five gold stars. Flags were flying on just about every taxi.
My plans for Saturday were cancelled so a friend and I gathered our kids and decided to mark National Day with a bus ride up to the historic Border Gate, the entrance into mainland China. 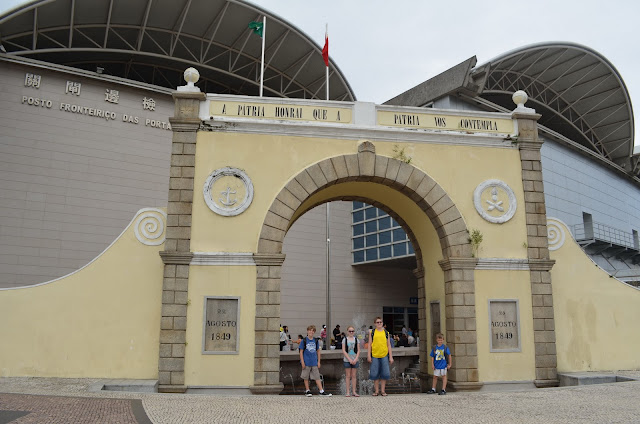 As American citizens, we can't enter China without visas, so we didn't cross the border, but we did stop to take photos of the streams of people entering and leaving Macau, many of which were stopping to take photos of us. 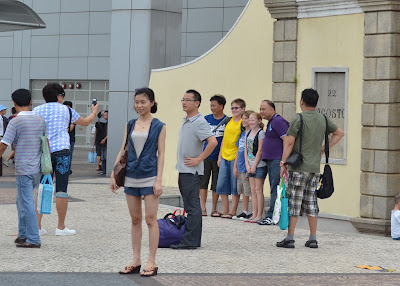 On the bus ride home, we encountered a few peaceful-looking demonstrations. Based on the huge number of police officers lining the streets, I wasn't certain it was going to stay peaceful. I was happy we were on a bus and not on foot. According to the Macau Daily Times, the government approved requests from five different organizations who wanted to stage protests in the street. By pure chance, we actually saw three of the five. 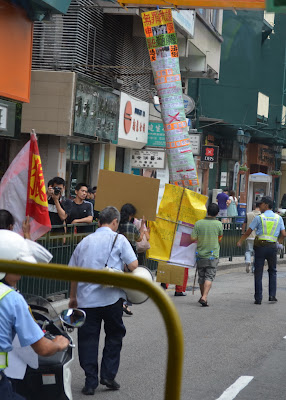 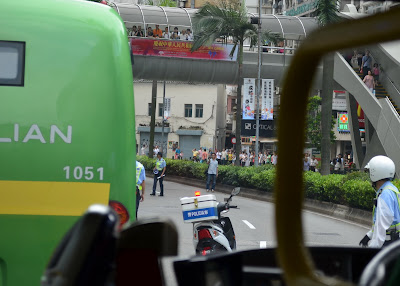 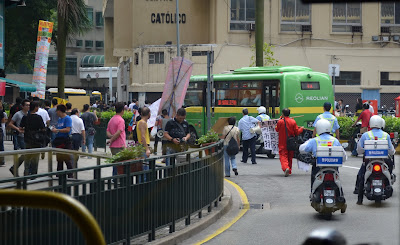 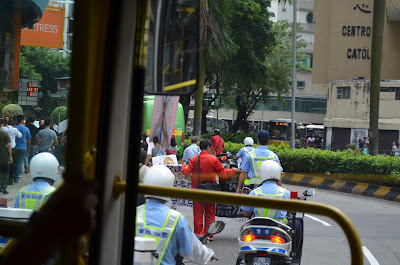 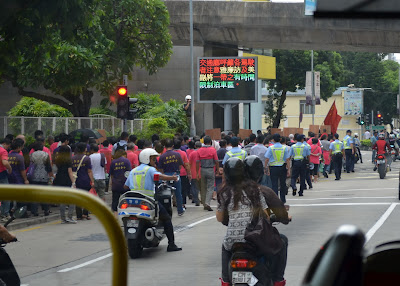 We were going so slow on the bus, the same speed as the people walking down the road. It felt a bit like we were in a parade. I resisted the urge to wave to the crowds on the sidewalk. I was actually quite happy (relieved?) to see protesters, because it's a reminder that though Macau is part of China, the people here have the freedom to stage a protest which stops traffic and draws crowds and news crews from all over.

As a final note to the day, there were fireworks lighting up the sky. We have an amazing view from our guest suite. 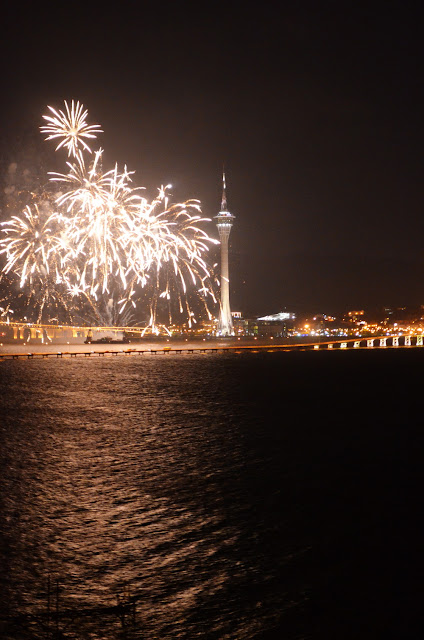 Don't you want to come stay with us? I thought so! Book tickets soon, we're heading into the most beautiful time of the year, with lower humidity and cool breezes. Normally I'm a summer girl, but I have to say that I'm quickly becoming a fan of fall after the brutal baking we got this year!
By Heather Rose-Chase at October 04, 2011