Michael's days off always fall mid-week, and we're still getting used to have a Monday be a "Friday" and not getting perturbed over a real Friday being the middle of the week for him.  I'm a very flexible person and I like to believe I'm raising flexible children, but I have to say that sending Michael off to work on Saturday and Sunday gets increasingly difficult each week for my boys.

Today was Michael's day off, so we took the boys for Linner (late lunch/early dinner) at a place called Gourmet Geezer. I can't even type that with a straight face. To me, a geezer is a little old man who keeps his teeth in a jar by the bedside. So I generally say something like, Hey guys, let's go eat at the old folk's home when I'm talking about it. But the owner is no geezer as I know it. He's a hip, young Brit who likes to race motorcycles and lines the shelves in the restaurant with trophies and photos of his wins. The food is cheap, decent, and western-style, and they serve breakfast all day. So when our tummies feel like a little less adventure than provided by the Chinese and Portuguese choices surrounding us, GG it is!

The boys rode their bikes to the restaurant, and chained them to a post out front while we ate. In Macau, mopeds rule and you rarely see someone on the street riding a bicycle. Very different from Japan, where our little seaside town boasted more bikes than cars on the road. 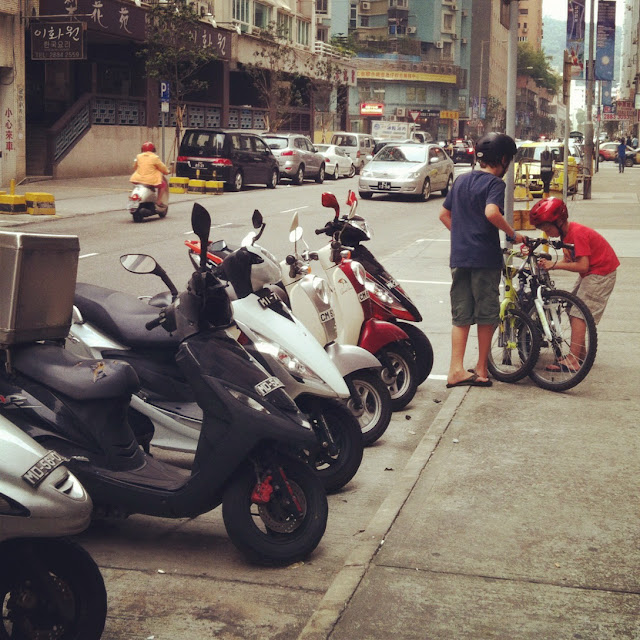 After we ate, Michael and the boys went off for a longer bike ride while I caught a bus home to get some work done. I had company while I waited at the bus stop: 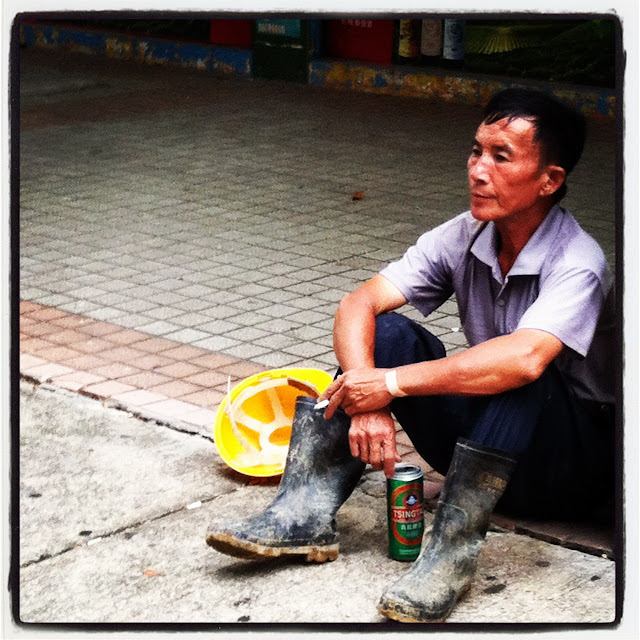 While enjoying his cigarette and beer, a Tsingtao delivery truck pulled up and the driver loaded case after case of beer onto a hand truck, then wheeled it into the store behind us. My friend's eyes never left the bed of the unsupervised truck. Whatever his thoughts, he never left his comfortable slice of sidewalk.
By Heather Rose-Chase at October 26, 2011