You know you're in China when...

...this is the view from your dining room window: 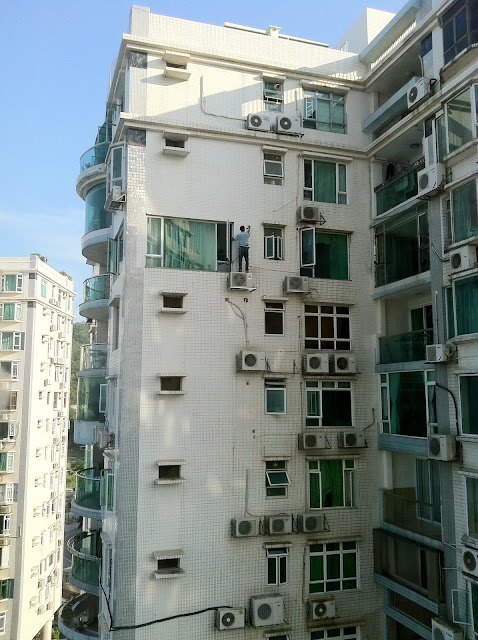 If you've ever visited the blog There I Fixed It featuring "redneck repairs," then you've seen this kind of thing. But it's generally a guy hanging from his second story over-the-garage add-on, not twelve stories above a concrete courtyard. This crazy fellow has a rope tied tied to his belt which is attached to the window frame support arm. If he fell, he'd just take the window down with him.

The boys were the ones who saw him first, when he was simply standing on the metal bracket that holds the A/C unit to the wall, without the A/C unit there. I called the boys away really fast because the last thing I want their innocent eyes to witness is a man plunging to his death! Later I checked back and saw he'd somehow lowered the A/C unit onto the metal bracket and was now standing on it, hammering a hole through the exterior of the building so he could pull a hose through and connect it to the A/C unit on the bracket. And still later, I checked the concrete below and could see no crater or splat mark, so evidently he lived to see another day.

I posted this on my Facebook page and watched the comments roll in. The most common one was "I guess there's no OSHA in Macau." No my friends, there is not. And the crazy thing is, this is a common sight. I've seen things that would make Mike Rowe shudder. Some lunatic is always hanging from some precarious perch, doing something dangerous here. This was just the first time I stopped to take a photo.

Perhaps in lieu of a series of funny sign photos, I'll give you an acts of death defiance photo series.

Here's something the boys and I just saw walking home from the market: 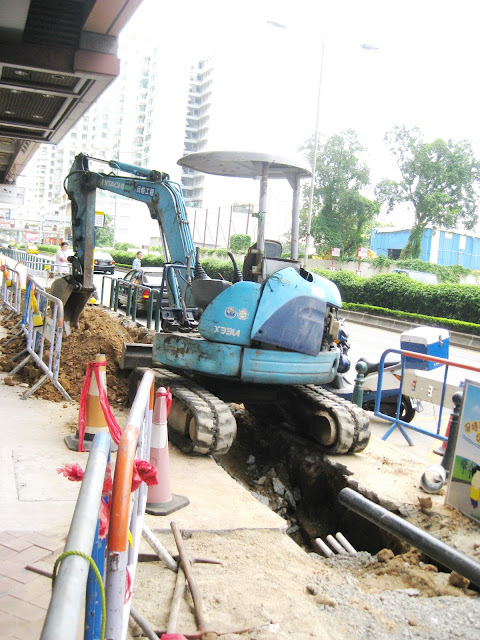 Sure, it isn't nearly as death defying as a man on an A/C twelve stories above ground, but even my eight year old recognized that a back hoe straddling a ditch at an angle is an accident waiting to happen. 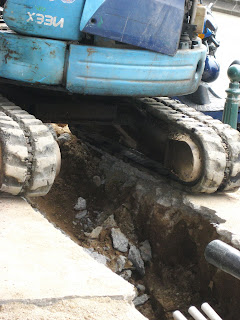 Oh Macau, I love you. You're crazy. Just don't kill anyone, please.
By Heather Rose-Chase at September 16, 2011

Email ThisBlogThis!Share to TwitterShare to FacebookShare to Pinterest
Labels: Acts of Death Defiance