Yesterday we were at a Typhoon Signal 1. We were taking silly photos in front of a sign before we all went swimming. The weather was quite warm, if a bit breezy.

Later in the evening, a friend of mine in Hong Kong sent me a text to say they were at a Typhoon Signal 3, so while Michael and the boys were snuggled on the couch watching a DVD before bed, I caught a bus to the market to stock up on groceries. Just as I was waiting for the bus home, the rain started to pour. The SMG weather website said Macau was expected to hit a Signal 3 in the night. Around 3 a.m. I heard the whine of the wind and the pelting of rain on the window, checked the SMG app on my phone, and sure enough, we were at a Signal 3.

My husband is deaf in one ear, so he was sleeping through the wild storm. But my kids were wide awake, huddled on the lower bunk, screaming at the frightening sounds. We've been at a Signal 3 before, so I reminded them that our building is made of concrete and steel and we will be safe. The noise of the storm kept me awake until 8:00 a.m. when it started sounding like we were in a perpetual earthquake. The ground wasn't shaking, but our windows sure were! I checked the weather again, and found we were finally experiencing a Typhoon Signal 8!

We're right along the edge of the sea, so we get battered a bit more than the people living inland. At it's strongest, the waves were actually cresting over the sea wall, onto the sidewalk at the bus stop below our bedroom window. Crazy!


When they hoist the Signal 8, they close all the schools, most businesses (including Michael's theater), and the bridges that connect Taipa and the Macau Peninsula. I've never seen the bridges empty, not even at 3:00 a.m., so it's an eerie sight to be sure!
Through two of the buildings that make up our complex, you can see the entrance to the bridge closest to us, and we caught sight of the police "barricade" stopping the traffic. I want to believe that no one would go out in this weather, but people are crazy. With gusts as high as 110 mph, I wouldn't want my car to get swept off the bridge into the sea. Yikes. 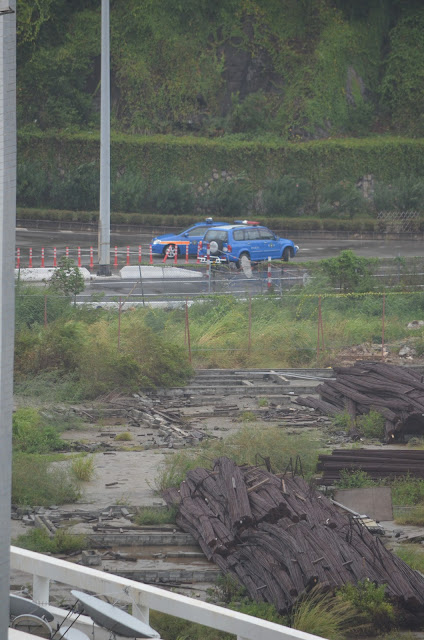 We're also having a Yellow Storm Surge warning, which means low lying areas are experiencing flooding up to half a meter deep. So glad I went to the grocery last night, and we're in a high rise building! The children are thrilled with the storm (now that it's daytime and not the scary middle-of-the-night) since it means we're all tucked up in the house and have nothing to do but spend time with each other. I guess that's not such a bad thing, right? It is very odd to see such dark skies at one o'clock in the afternoon though.

There is another storm on it's way which will hit the Philippines early Sunday morning, then make it's way west toward us by Monday afternoon. I'm guessing the grocery store shelves will be even more empty than they normally are!