On our third night in Macau, Michael took us to see his show, House of Dancing Water. The boys and I were overwhelmed by everything being thrown at us in our first week here, and the show was one more bright and colorful experience that left me open-mouthed and filled with wonder in a week of many things that gave me the same response. Here we are, in all our jet-lagged glory, sitting in the VIP section where we were given beverages of our choice, trays of elegant chocolates, and signature bottles of water.
Michael has waited patiently for a post about the show, asking every few days if I planned to write about it. Considering the show is the reason we are here, I knew it had to be a good post, not just something I threw together. I started one, but discovered holes in my memory. Michael would come home from work and mention a particular aspect of the show, and I would have no recollection of it whatsoever.

I asked if we might see it once again, to refresh my memory and give me some specifics to write about rather than just general impressions. Michael obliged, and the boys and I were treated to a second viewing of the show last week.

First, a little background. The creative genius behind the production is Franco Dragone. Franco was born in Italy and raised in Belgium. He was one of the creators of Cirque du Soleil and from 1985 through 1999 directed almost every single one Cirque's shows and was highly influential in building up the brand and making it what it is today. Cirque shows are a highly unique blend of live theater and circus performance, but without animals. They involve crazy acrobatics, distinctive costumes and make up, amazing music, and incredible technical features. They have a few touring productions and several shows with permanent houses such as seven in Las Vegas (I've seen 4 out of the 7, including one of them twice), La Nouba in Orlando, Florida (saw it several years ago), and even one here in Macau, Zaia (which I'll see soon).

In the year 2000, Franco left Cirque to form his own company, Dragone. He created Celine Dion's show, A New Day at Caesar's Palace, and Le Rêve at the Wynn Resort, both in Las Vegas. The "stage" at Le Rêve is actually a pool that uses over a million gallons of water and all the performers are scuba certified. I wanted to hop on a quick flight to Vegas before we moved here so I could see it, but ran out of time. Which is fine, because I got to see House of Dancing Water which is even more of a spectacle! 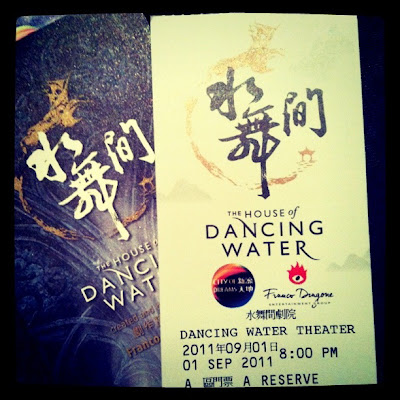 House of Dancing Water is located on the Cotai Strip, south of Taipa. It's part of City of Dreams, a mega-sized property that includes three hotels (Hard Rock Hotel, Crown Towers Hotel, and the Grand Hyatt Macau), 200 luxury shops, 20 restaurants and bars, and of course 420,000 square feet of gaming space right in the center.

The Dancing Water Theater was specially designed by Pei Partnership Architects, sons of I.M. Pei who designed the Macao Science Center. It's a beautiful space that seats 2,000 audience members in a 270 degree theater-in-the-round. Once again, the stage is water - a pool filled with a staggering 3.7 million gallons of water! That's the equivalent of 5 Olympic-sized pools. There is an actual perforated stage floor that allows for a solid surface for several parts of the show, which quickly submerges to allow for the breath-taking high dive acts. The show took five years to develop, at a cost of over $250 million USD.

As for the show itself: Wow! I confess I was really worried the night I saw it the first time. After all, we've disrupted our happy little California life to move the family halfway around the world for this show. What if I saw it and thought it was horrible? What if the kids were bored and hated it? My fears were unfounded. The word that best describes it is spectacle. During creation, the creative team worked to infuse the show with as many Chinese themes as possible. The show starts off in a modern day Chinese city, which looks like it could be Hong Kong or Shanghai with a little Macau in there as well, and quickly takes us back to the ancient past.

You get a great indication of how huge the pool is right from the very beginning when an enormous ship rises out of the water. Performers jump from the yardarms into the water, and everyone in the first few rows is at risk for getting soaked! 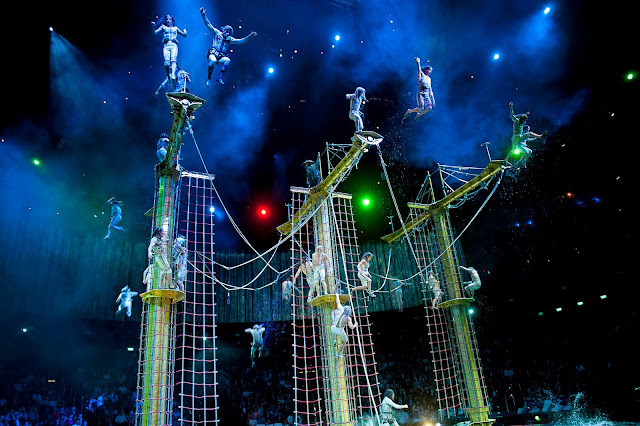 Quickly following is an act that takes place high overhead, with aerialists hanging from a huge chandelier, dancing about and dangling with grace and without fear, as if they were doing this on the ground and not 40+ feet in the air without safety harnesses. 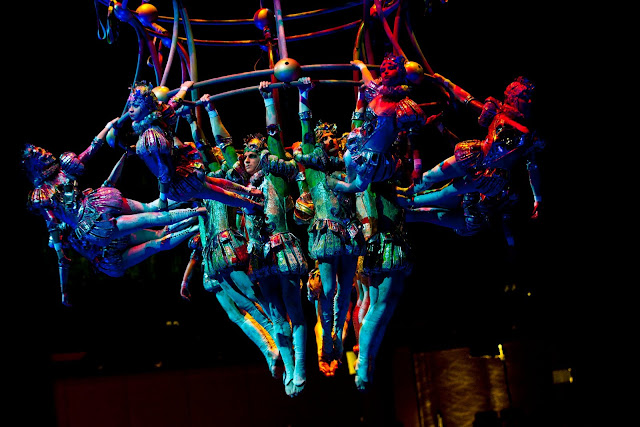 A real crowdpleaser is the group of African acrobats who are incredibly lithe and light on their feet despite their incredibly bulky muscles. They appear throughout the show, and every time I see them I wonder if they've somehow beat gravity. They seem to leap and stay in the air longer than humanly possible. 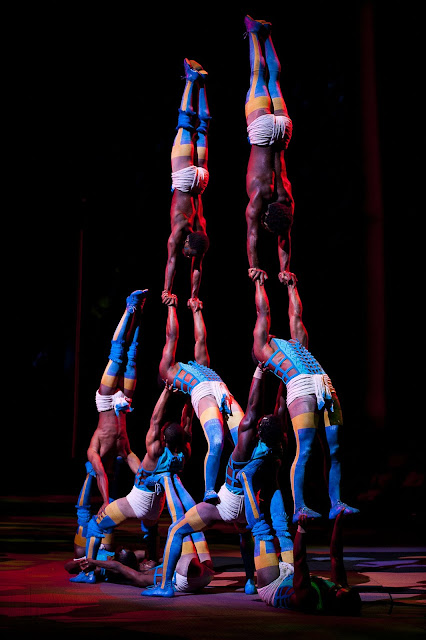 At the heart of the House of Dancing Water is a love story between a man from the West who discovers a beautiful Chinese princess, imprisoned in a cage by what one can guess is an evil stepmother queen, who commands a bevy of beautiful yet evil women who like to capture men and force them into doing crazy things, like hanging from straps while they fly high above the audience and show off their incredible abs, pecs, and biceps. 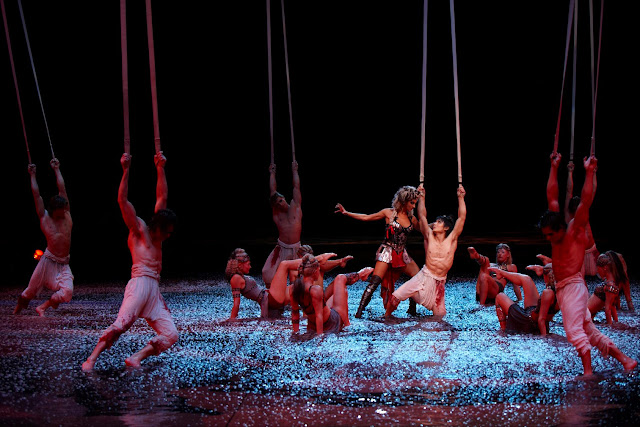 Of course it's up to the guy from the West with his flowing blond hair to rescue the poor princess. Part of this rescue inexplicably involves flipping through the air on motorcycles! This part of the show I watched peeking out from behind my hands, ever fearful that a member of the moto act was going to meet his demise, followed by all the rest crashing into him. My one and only thought during this part of the show was where are their mothers and why are they not here to stop these crazy boys from trying to kill themselves! 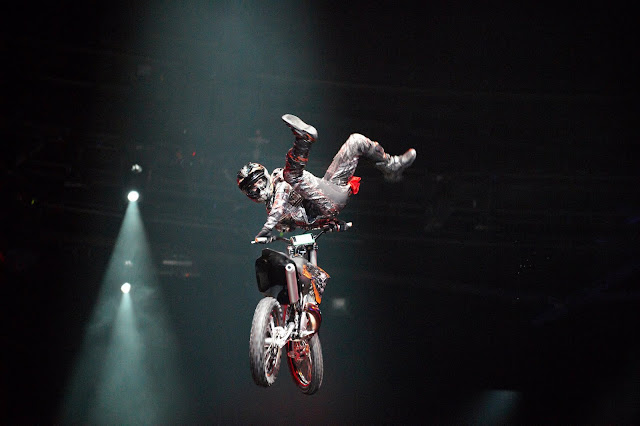 When all seems lost and we fear the two love birds will never be together, we find out that the beautiful Chinese princess actually has power over the water, and can make it dance at her will (thus the title House of Dancing Water), and put the evil stepmother in her place in a rather comedic way. Someone told me the show is very loosely based on the history of Macau, and if so, we can assume that the princess is based on the story of A-Ma, goddess of the sea who legend says has the power to stop (or start) storms. In the end, love prevails, and our hero and the beautiful princess live happily ever after, riding a motorcycle into the sky with a troop of acrobats, high divers, and a contortionist. 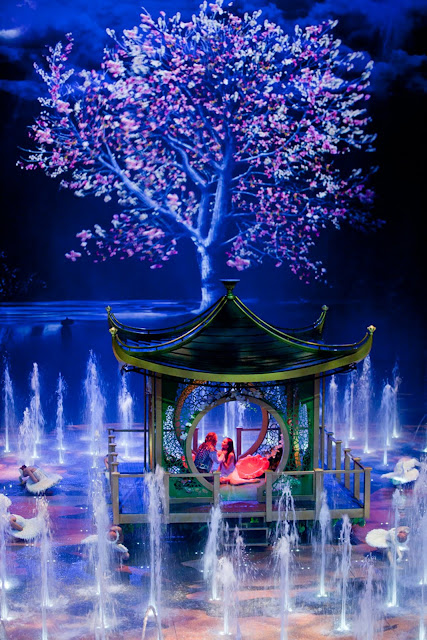 House of Dancing Water is a lavish spectacle that assaults your eyes and ears, leaving you short of breath and with your heart pounding. Originally I thought it would be more like a Cirque show, heavy on circus-type acts with lots of fantasy. It certainly has the amazing death-defying and awe-inspiring  acts, but it was less obscure and more solid than I was expecting. It reminded me of a very extreme ballet, where the story is told through movement and expression, with a sprinkling of the bright colors and drama of a Cantonese opera (but less painful on the ears!). The storyline is quite thin, but the show never bores. There are a few parts that made wonder what they were thinking (the curtain call for instance - it is a completely different tone and style than the entire rest of the show!), but for the most part, I loved it.

The show celebrates its first anniversary this weekend, and almost every single show sells out. Ticket prices range from 1380MOP ($173 USD) for the VIP seats, down to 480MOP ($60 USD) for the least expensive seats in the "wet zone." The second time we saw it, my two boys sat in the wet zone in the front row. They got totally soaked, while I stayed further up and completely dry. They loved seeing it from that perspective, and are very sad that they can't see the show every single night. I'm a pretty proud parent that we raised two children who are excellent audience members that can be trusted to sit in the front row and behave perfectly without parental supervision! Some kids in other families get to play sports and grow up watching football. Our kids get to see a lot of shows and spend hours backstage learning about automation and sound systems. And what a show to learn about! Lucky kids!


Here's the slightly cheesy, one minute promotional video for the show. Even this might take your breath away!


(Email subscribers, please click through to the site to watch the video)
By Heather Rose-Chase at September 14, 2011