It's 2011, which means it's Macau Census time! Everywhere you go signs proclaim this fact. There are banners hanging from buildings, bumper stickers on buses, signs plastered on the seats in taxis, even three dimensional sculptures running down the median on the Cotai Strip (which is modelled after the Vegas Strip). We actually have a poster outside our elevator! 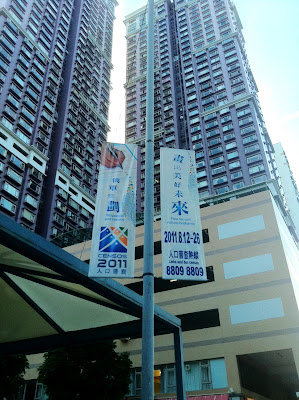 I got a fat envelope in our mailbox with the now very familiar Macau Census logo. I was super excited to be able to participate in it, because it seems like we weren't counted in the last two U.S. censuses thanks to being out of the country or in the middle of moving house. However when I opened the envelope, all the writing was in Chinese. 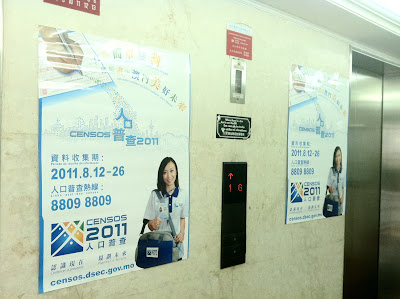 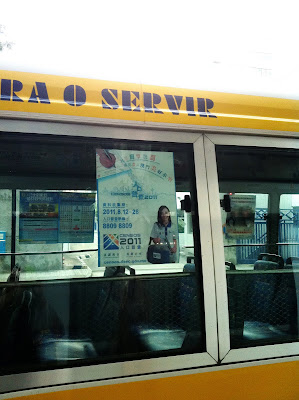 A week ago my doorbell rang in the evening just as I was starting to get the kids into bed. This surprised me because we have a doorman who won't let anyone up except us, or there is a key pad that you must type in a code to gain entry, or you can call the flat from a phone in the lobby and we can buzz you up. So to have our doorbell ring without first getting a call saying there was someone there to see us was out of the normal. Our stuff had just arrived and there were boxes and packing detritus strewn throughout the areas visible from the front door. It was a disaster. I said a quick prayer that it wasn't the owner and opened the door to find a bright-faced college-aged young man wearing a Macau Census polo shirt with a Macau Census satchel across his body and a Macau Census lanyard with his photo on it. I figured it was safe to let him in!

He asked me (in stunningly perfect English) why I hadn't yet returned the Macau Census form. I pulled the forlorn envelope down from the shelf and pulled out the census and explained that it was Chinese, and I was not. He quickly pulled out the English version from his satchel and asked me to fill it out on the spot while he waited. 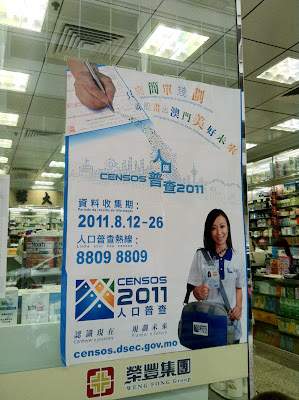 I wanted to savor the moment a little, my first civic act while living here, but as soon as I'd fill out one line, his finger would dart to the next, which he would read aloud to me. I suppressed a giggle, because after all, it was the Chinese version I couldn't read myself, not the English one! But I was quite impressed with the guy's urgency and fervor for making sure that everyone got counted. I read in the Macau Daily Times that 7,000 people applied to be census field workers, and only 2,300 were selected. I have to say they picked a good one in the young man who came to our door! And if our decendants need to find out where we resided in 2011, they'll be able to find us here! Because for once, we count!
By Heather Rose-Chase at August 29, 2011

Email ThisBlogThis!Share to TwitterShare to FacebookShare to Pinterest
Labels: Census, Slice of Home