If you know us at all, you know we're major fans of a certain magical place where princesses roam and tuxedo sporting mice sing and dance on parade down Main Street twice a day. Both Michael and I were born and raised in Southern California, and we were fed a steady diet of Disneyland and Disney films and merchandise throughout our formative years.

As I've grown up and moved all over the globe, one of the most shocking things I've learned is that this Disney DNA is not something everyone, everywhere, shares with me. In fact, there are actual American citizens that have never set foot in a Disney theme park! Just over a year ago I had the supreme privilege of spending the day at Disneyland with one of these rarest of non-initiated creatures (someone my own age!). Introducing her to the magic of the Happiest Place on Earth easily rests in my top ten Disney experiences.

Of course, the Disney marketing juggernaut of the last decade ensures that all children in most nations are as familiar with Mickey Mouse as they are with the sun that rises each morning in the east. The merchandise of my childhood was a tiny drop of rain compared to the hurricane of modern Disney options that have infiltrated the marketplace (Disney toilet brush anyone?). Having only boys, we've escaped the pink Princess tsunami that other female-filled families have succumbed to, but we do have our share of Disney stuff filling the cupboards and shelves.

Disney theme parks have a special place in our hearts. My first date with Michael was at Disneyland in California. Part of our honeymoon was spent at Walt Disney World in Florida. Our first act as new residents of Japan in 2001 was to take our then-11 week old baby Nathan to snowy Tokyo Disneyland (He visited Disneyland in CA at 10 days old). My husband's blood, sweat, and tears went into bringing Tokyo DisneySea from a patch of reclaimed land into a fully functioning theme park filled with interesting and exciting entertainment venues. And six years ago, Michael built a theatre from the ground up that has spent the last several years enticing people to cheer the hero and sigh over the romance in a show at Hong Kong Disneyland. The only currently operating Disney theme park we haven't visited is in Paris, and maybe we can knock that off the list in the next couple of years.

So yes, a three day visit to Hong Kong for our family will probably always include a visit to our old animated friends in the Magic Kingdom, along with a visit to former co-workers willing to sign us into the park and get us an upgrade at the hotels. We'd booked a reservation at the Hong Kong Disneyland Hotel, and I was very impressed. A lifetime ago I worked for Walt Disney Travel and the Resort Hotels in Anaheim, CA. I love a classy and elegant hotel, and this one didn't disappoint. The Victorian style architecture with the red roof reminded me of the Hotel del Coronado in San Diego, CA. Here's the balcony from our room, with a view of the South China Sea out the window: 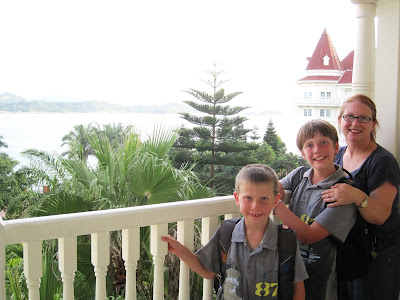 No Disney hotel is complete without  a touch of the characters... Hong Kong Disneyland Hotel has a subtle Seven Dwarfs theme. Here's the basket of amenities. I did make off with two of the sewing kits for my friend Dr. Lori, who collects all things Doc! 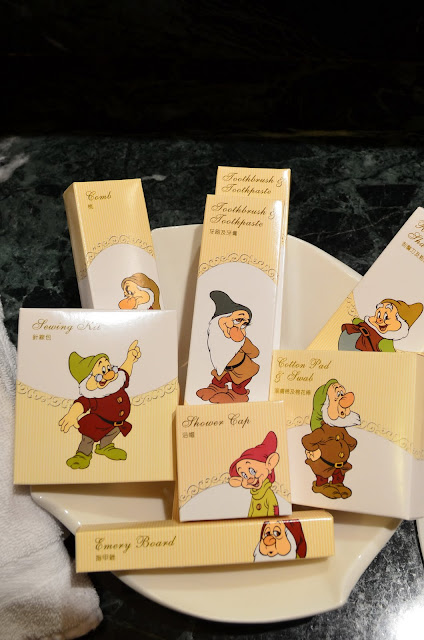 We were starving after our long day of travel from Macau followed by the junk trip, so we went to one of the hotel's two restaurants, The Enchanted Garden, for dinner. It was an all-you-can-eat buffet, which was very appealing in our famished state. What we didn't know is that the price of dinner included a visit from Mickey, Minnie, Goofy, and Pluto! Bonus! 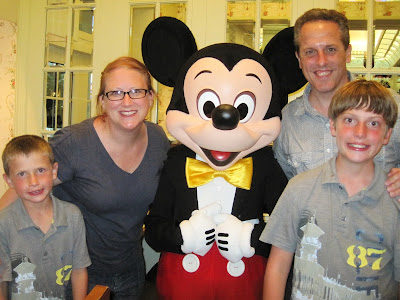 We all passed out shortly after dinner, and woke up in the morning with growling stomachs. Not wanting to pay a premium for a Character breakfast, we decided to try the other hotel restaurant, a traditional Chinese restaurant called the Crystal Lotus. It was such a beautiful place to start the morning! Of course, there was almost nothing in the buffet that we are used to eating for breakfast! Lots of steamed vegetables, fried noodles, and a few steamed buns filled with onion. So we loaded up on pastries and cheese from the cheese platter and called it good. 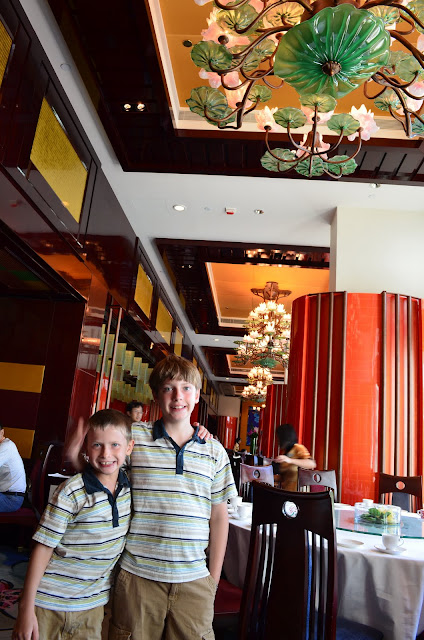 And then we boarded the hotel shuttle for Hong Kong Disneyland. As soon as we walked up and saw the entrance, I started doing that weird half-cry, half-laugh thing that signals I'm overwhelmed with emotion. The last time we were there, we were tearfully hugging friends goodbye, and our boys were two and four, just babies really. And now, we're back, joyfully hugging friends hello and reflecting in wonder at the circumstances that led us back to this part of the world once again. 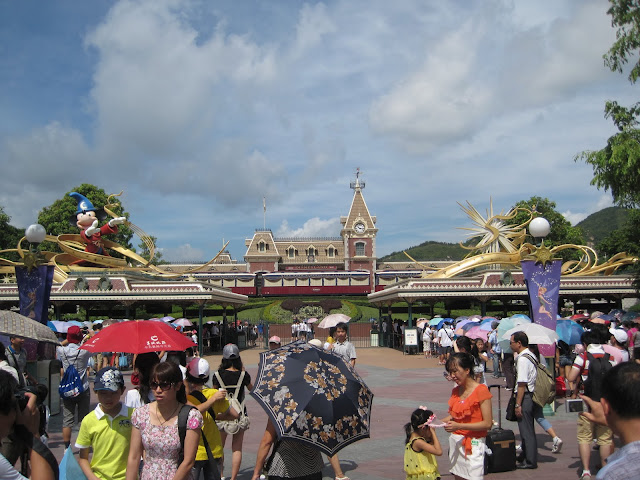 No visit to any Disney theme park is complete for us without a Castle shot!
You can see how hot it was by our red faces and squinting children! 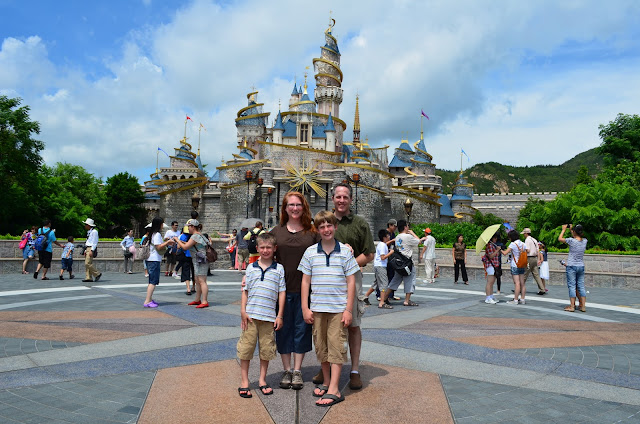 Every time I'm in Hong Kong Disneyland and see the hills of Lantau Island peeking up behind the Castle I get a little jolt. In just about every other way, this area is identical to California, so I get lulled into believing it's the same place. 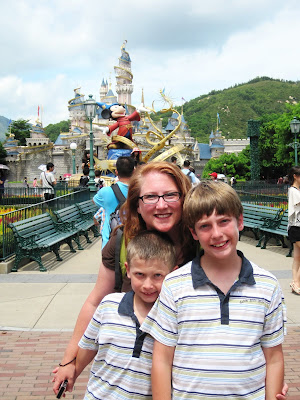 The Pixar film Cars 2 just came out in Hong Kong this month, but the boys saw it months ago when Auntie Holly took them off my hands for a couple hours so I could pack in peace. There was a big scavenger hunt going on in the park, where you had to find these big postcards and do a secret mission at each location. Once you completed the mission, you got a special photo with the Car of your choice. 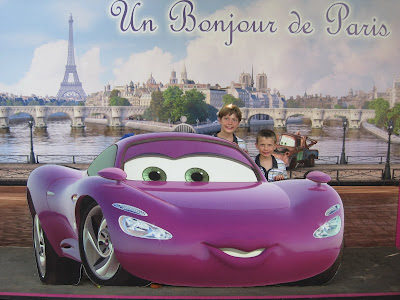 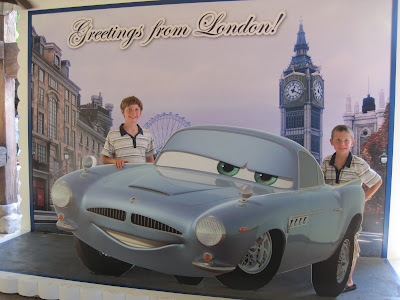 We went on every attraction and saw the parade plus Michael's old show, The Golden Mickeys.
Here we are in front of his theatre six years ago: 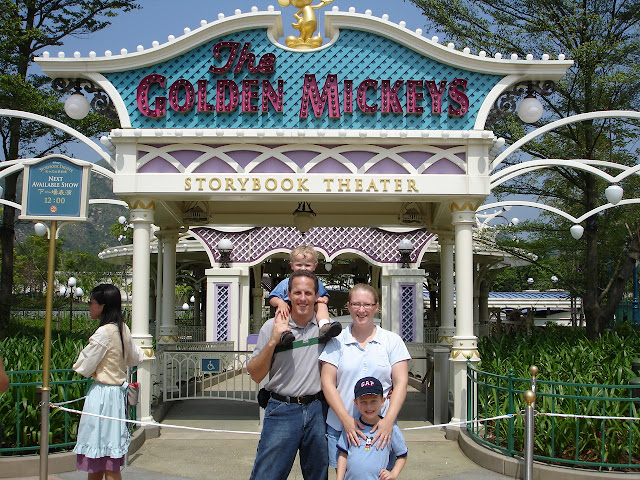 And here we are, this month: 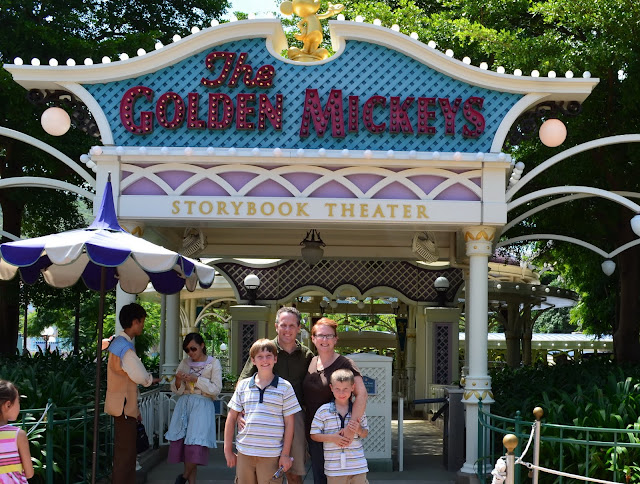 The boys, my cousin Josh, and I all appear in a blink-and-you'll-miss us portion of the opening video sequence of the show, which was filmed on an unrelentingly hot day prior to the grand opening back in 2005.
No autographs, please.
The day was so much fun, and one that we really needed as a family.
We stayed for the closing fireworks: 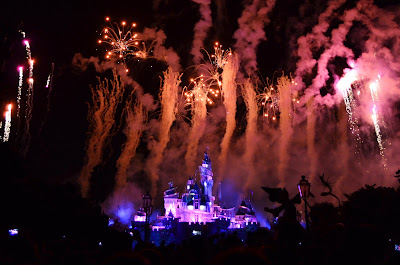 And then did the tiniest bit of shopping for a certain girl we know who shares Michael's upcoming birthday. We caught the hotel shuttle back to our room, where housekeeping had turned down the sheets and made sure the boys' Mario and Luigi were all comfy and ready for bed: 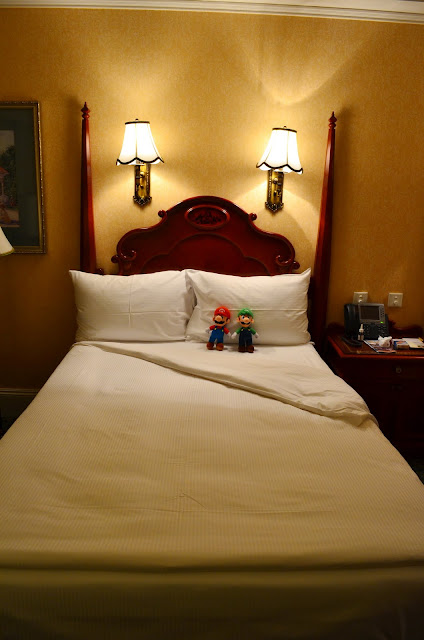 Good to know that the Disney magic is still intact on this side of the planet!
Sweet dreams, my friends! 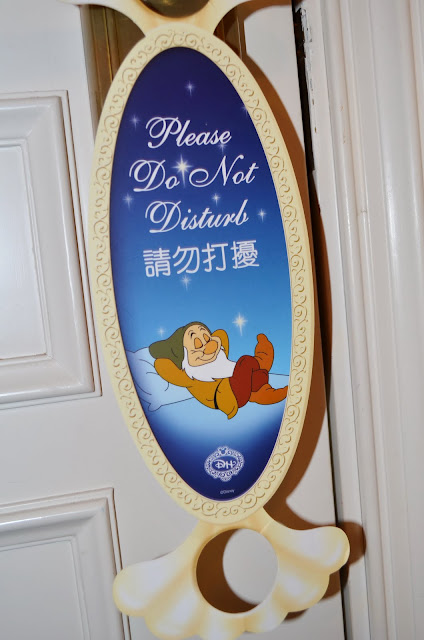