After two days of incredibly rainy weather that kept us glued to the windows watching in awe, I was ready to get back outside.

Almost all of Michael's show is done in water, and much of the technical team is scuba certified. Michael was scuba certified years and years ago by NAUI (National Association of Underwater Instructors), but all the divers in the show are certified through PADI (Professional Association of Diving Instructors). So to show solidarity with his team, he's going through the process to get a new certification. Part of the certification involves a physical and an ear test. Last week we went with him to the English speaking doctor at a local clinic, and then he was referred to the ear specialist, who gave him an appointment on Saturday morning. Since he needed to take a taxi to the Macau peninsula to see the ear doctor, the boys and I decided to tag along to wherever the ear doctor happened to be, and then we'd explore from there.

Turns out the ear doctor was within about three blocks of the base of Guia Hill. Since I'd just written about the big Typhoon symbols housed at Guia Lighthouse, I knew we had to go see them in person! So we said goodbye to Michael and took off down the road.

The street around the corner from the ear doctor. It was only 9:00 a.m., so you can see all the stores are closed up tight. 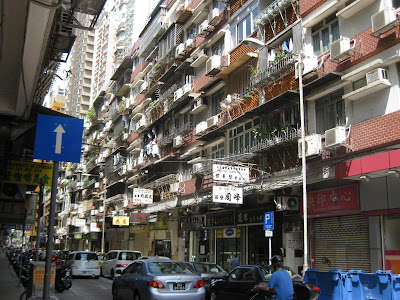 At the base of Guia Hill is a small neighborhood playground. Despite the high post-storm heat and humidity, my boys perked right up at the chance to run around and play with the neighborhood kids. When I finally had enough of sitting in the patchy shade, I collected them and we paid our fare to ride the cable cars to the top of Guia Hill. 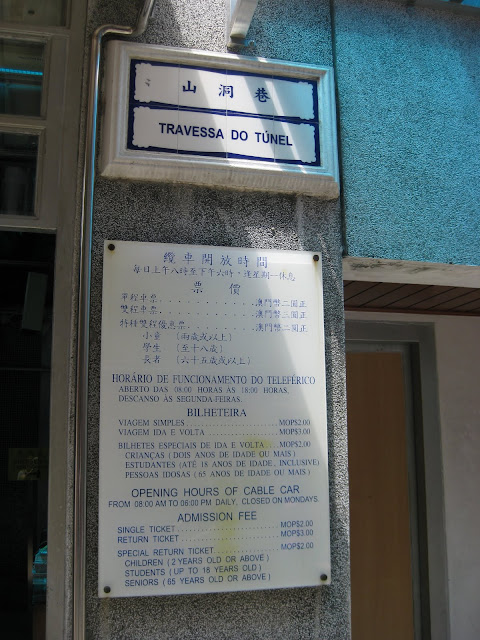 I read that this cable car system is the shortest in the world. The whole ride took 80 seconds! At 37 cents USD for adults and 25 cents USD for kids round trip, I wonder how in the world they make enough money to keep it operating! We only saw one other couple using it, everyone else seemed to be walking up the steep steps cut into the hill. This told me that we were either taking our lives into our own hands and I should've kissed Michael more passionately when we said goodbye at the ear doctors, or it was just too early in the morning for actual fare-paying customers. I hate heights, but I love my adventurous boys, so of course we rode the cable car! 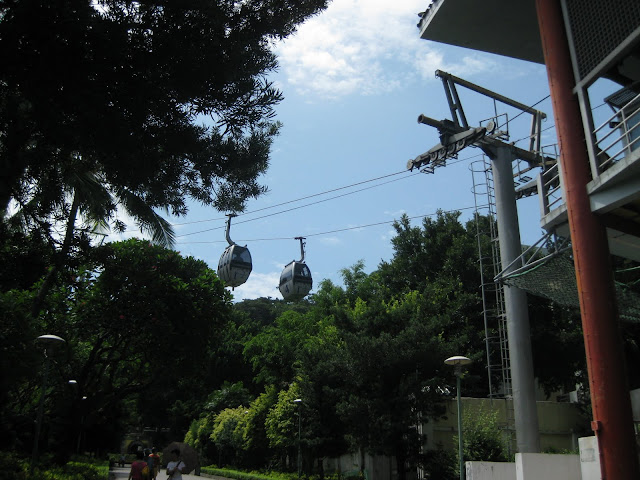 The view looking up (so grateful we didn't choose to climb those stairs): 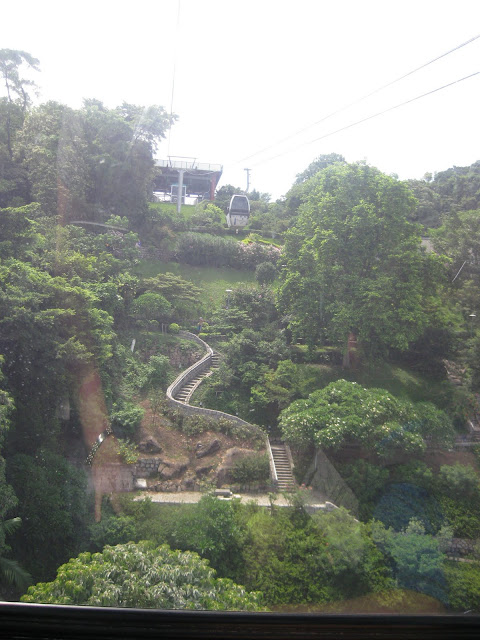 The view looking down (gulp): 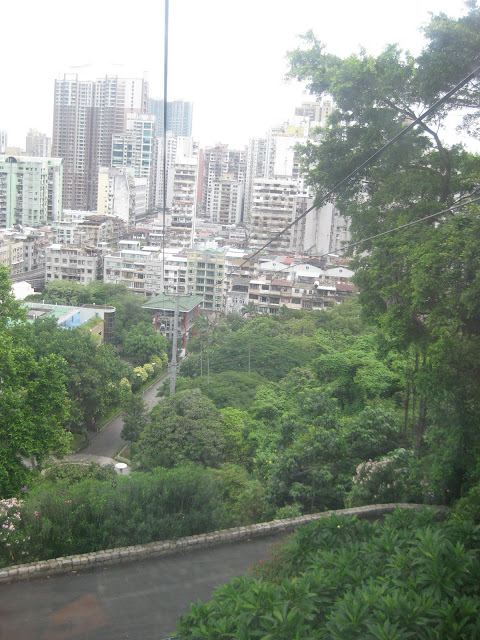 After taking the cable car, I did not expect that we would have to walk and walk and walk some more to actually reach the fortress and lighthouse. The path was a gentle slope, fully shaded, and though it was blazing hot (97F) and quite humid (95%), there was a great breeze blowing in from the sea. It didn't prevent the three of us from quickly becoming drenched in sweat. As we strolled up the path, several joggers passed us. Crazy! 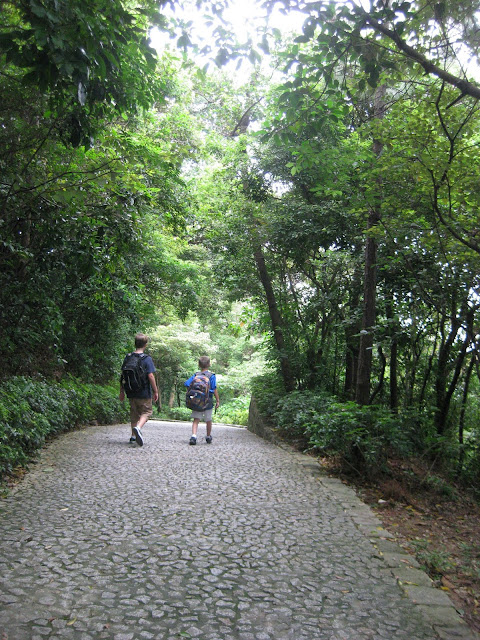 Continuing  our walk up the hill, we came across several of these round holes. The boys thought they might be jail cells, since they had bars on the doors. I thought it was interesting how if you were flying overhead, they would be camouflaged by the greenery and that maybe they were some sort of hideouts. After all, this place is called the Guia Fortress and Lighthouse. 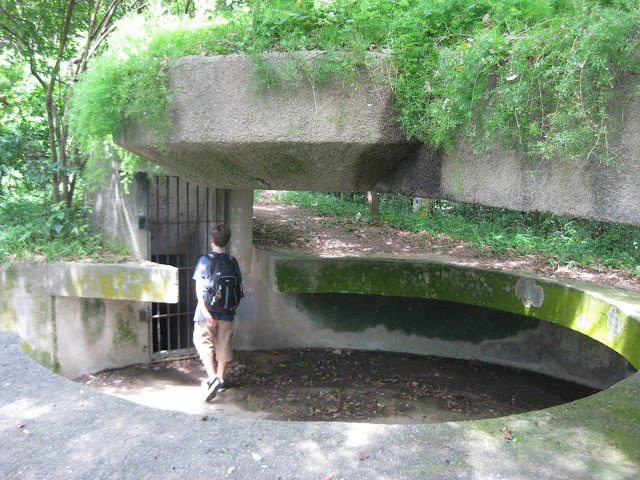 Just a littler further up we found the answer in the Exhibition Gallery of the Guia Hill Air-Raid Shelter. In 1931, a series of tunnels were constructed under Guia Hill that led to cannon placements, the fortress, and barracks for garrisoned soldiers. The circular openings we saw were entrances to the tunnels. 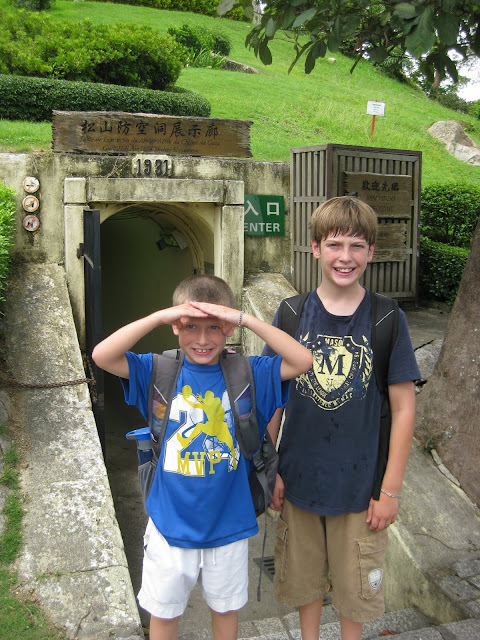 We went down into the Air-Raid Shelter, grateful that it was much cooler than the air outside. The walls were lined with photos, drawings, and schematics showing what it was like when it was in use from 1931 until 1962, when it was abandoned and fenced off with barbed wire. They had an original generator on display that used to power the lights. It was driven using just water and man power without fuel, which would create loud noise and smoke, exposing their position to the enemy. Genius! 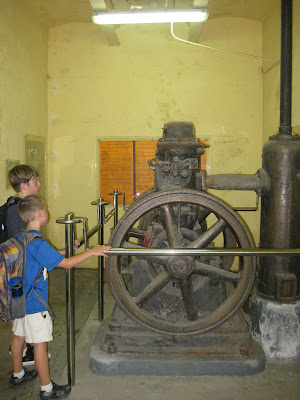 After leaving the Air-Raid Shelter, we walked around the hill and into the Guia Fortress. In the entrance we found what I'd been looking for, the Typhoon Signals! Being born in the Internet age, the boys were perplexed why anyone would need to hang a signal instead of just checking the website to see how bad the storm is. Silly boys. 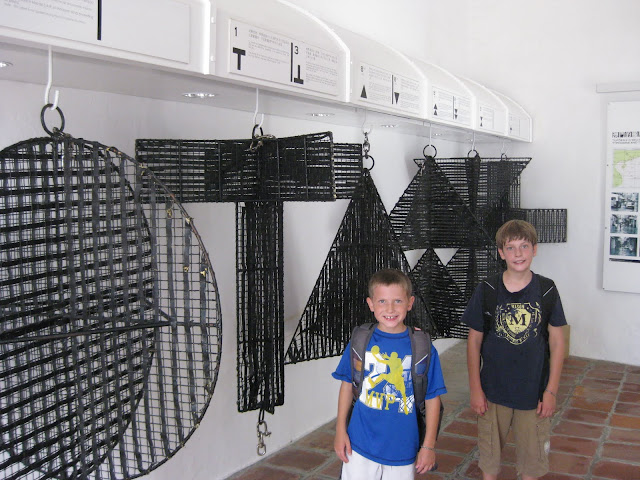 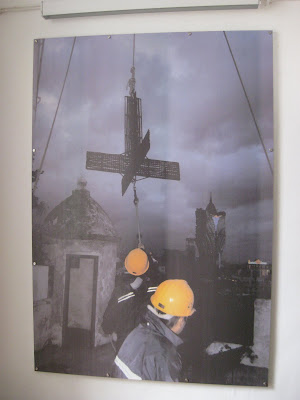 Looks like it could weather any storm to me! 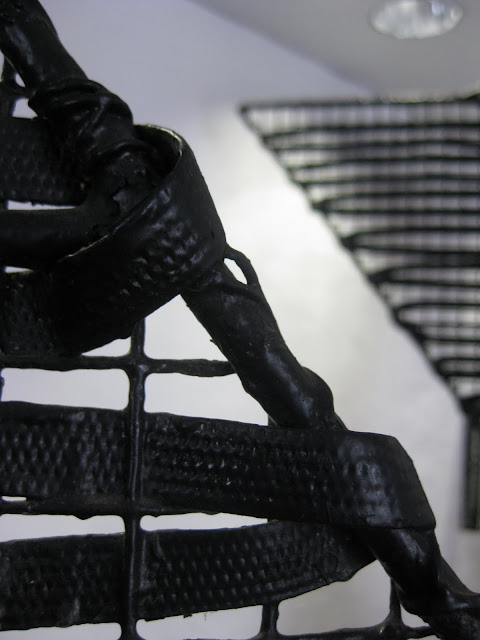 The Fortress itself dates back to 1622, and was originally built to defend Macau against Dutch invaders. And though it was made for defense, it's easy to see that the primary function was as a lookout, with 360 degree views from the highest spot in Macau, 300 feet above sea level. It's not very big, only about half a square mile.
Since it was Saturday, I figured the place would be overrun with tourists. It wasn't. It was overrun with brides and photographers. This greatly affected our visit, because everywhere we went, we were shooed out of the way of someone's shot. What? You don't want three red-faced, sweaty foreigners in your wedding album? Can't imagine why not! 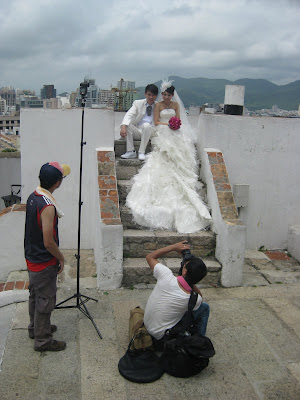 Atop the fortress, next to the lighthouse is the Guia Chapel, which started construction in 1622. It was a functioning chapel that held Catholic services. When it was restored in 1998, they discovered frescoes depicting traditional Biblical scenes mixed with Chinese symbols. It is quite small, but we all agreed it was worth visiting because of the air conditioning! Inside the chapel were a group of students taking measurements and holding microphones up to the walls, carefully taking down readings on graphs. How I wish I spoke Chinese to ask them what they were doing! Maybe the walls were talking? Signs prohibiting photographs were everywhere, along with a guard who scowled at the camera in my hand. So no photos of the inside. This time. 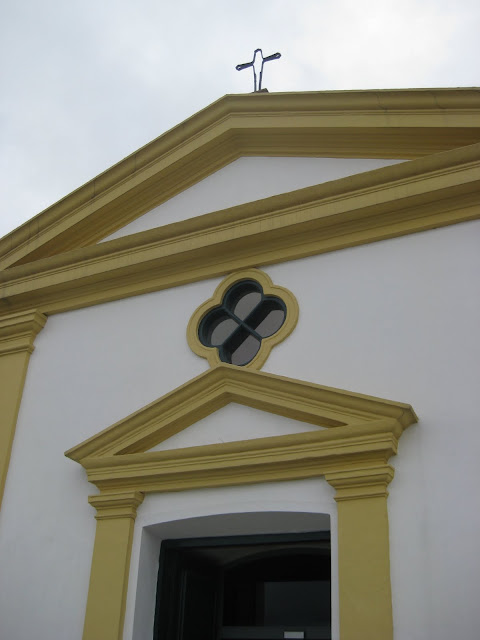 And then finally! What we came to see! The Guia Lighthouse! 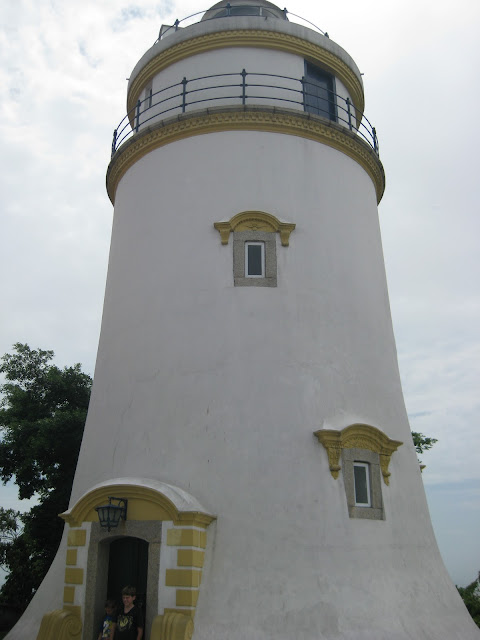 Of course, I had to take stealthy photos thanks to the photography crews snapping away at this bride (Model? Famous Chinese actress?) using the Lighthouse as a backdrop: 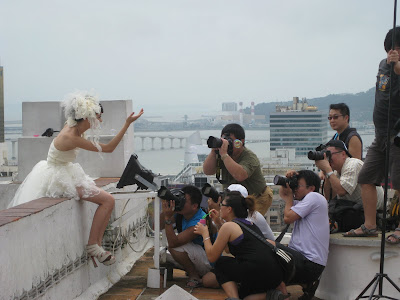 We'll definitely go back. I'll bring my bigger camera. Because I can totally understand why so many brides want this location for their photo albums. Every corner of the place calls out to be photographed. Look at the anchor-themed lantern above the Lighthouse door: 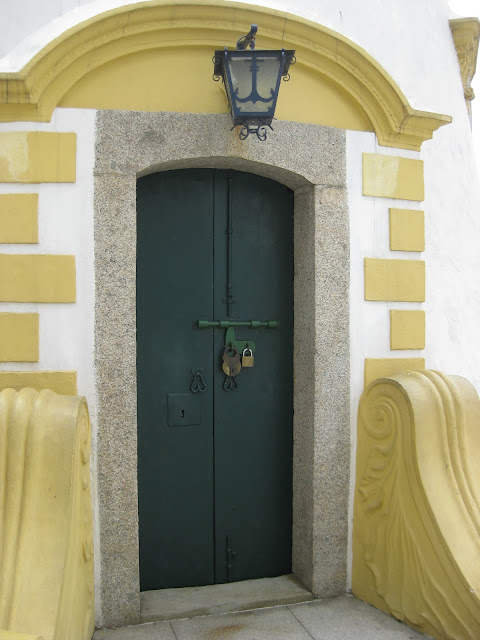 And the quaint, curved keyhole in the door, with the old fashioned lock alongside a modern one: 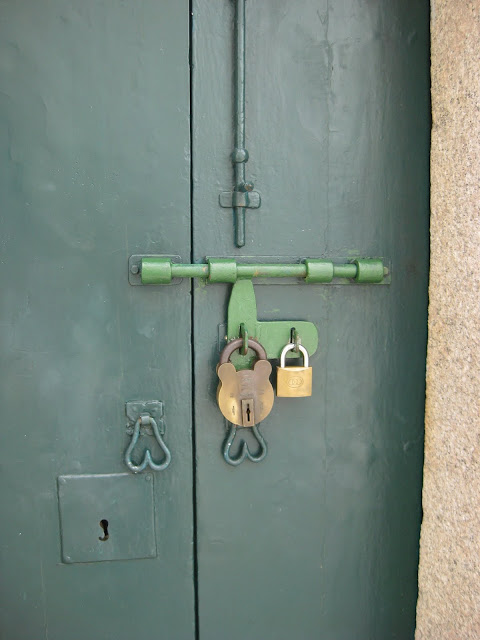 The lighthouse itself was only built in 1865, but it was the first one built on the Chinese coastline. Macau takes all of its coordinates from the Lighthouse's exact location. And though the city is building up around it, the light can still be seen each night from up to 20 miles away. As I sit here typing this, I can see the light flashing every few seconds across the water. Once a year they open the Lighthouse to the public. You know I'll be there!
The view was amazing (when I could actually get a shot that didn't include a sweaty bride): 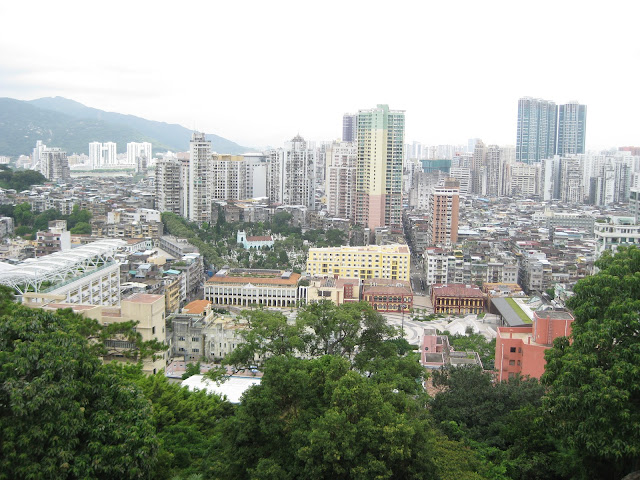 I promised the bride-phobic boys we'd come back when it wasn't so hot and it wasn't a Saturday. We started to work our way back down the hill, and it felt like the humidity was rising with every step. We stopped at a tiny stall at the base of the lower cable car station to buy water after draining every drop from our giant water bottles. Just as we were guzzling it down, the sky opened up and we got showered in hot, steamy rain. We ducked for cover and I checked my wallet to make sure I had money for a taxi. Unfortunately, all I had were $500 MOP bills (Macau's currency is the Macau Pataca or MOP), equivalent to about $63 USD. Considering the long taxi ride that morning from our house to the ear doctor had only cost $50 MOP ($6.25 USD), I knew I was in a little bit of trouble. No taxi driver will take a $500 MOP bill. Normally in this situation I'd pop into a bank or McDonald's or large grocery store to break the bill. But we were in a very residential neighborhood, dotted with tiny noodle stands and newspaper boys, far from big businesses that could help a girl out. Plus, even if we had the right bills, it seems like whenever it starts raining, the taxis disappear. So we were somewhat stranded.
The rain continued to pour, and we had only one umbrella for all three of us, not ideal if you need to walk a long distance. I saw a big crowd huddled under an awning in front of a bus stop, and realized we were going to have to go local and learn how to use the Macau bus system right then and there. We'd already purchased bus passes, which work a bit like debit cards, deducting money as you go and saving you quite a bit on each fare, but we hadn't yet had the opportunity to use them. No time like the present!
We confidently shoved our way into the crowd so I could read the bus schedule, trying to decipher which of the seven bus routes that stopped there would actually get us across the bridge to Taipa. I about kissed my iPhone with its MacauMap App that shows the bus lines and gave me a good idea of which of the two routes to Taipa might aim us closest to home. And then when the appropriate bus pulled up, we got on. 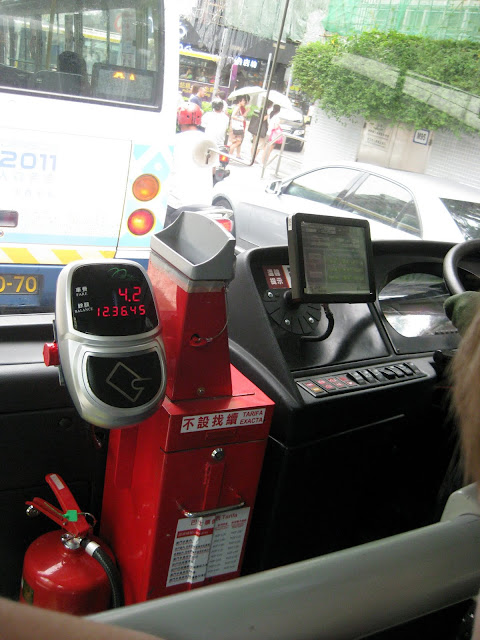 It was standing room only, with everyone hanging from the handles and poles, but I pushed little Benjamin toward the back when we stopped and a few people got off. He's just too short to hold on to anything except me or the other passengers. I took this photo after more people got off and Nathan and I got seats. The ladies in the back were giggling and smiling at Ben, who just beamed back at them. Pretty cute. 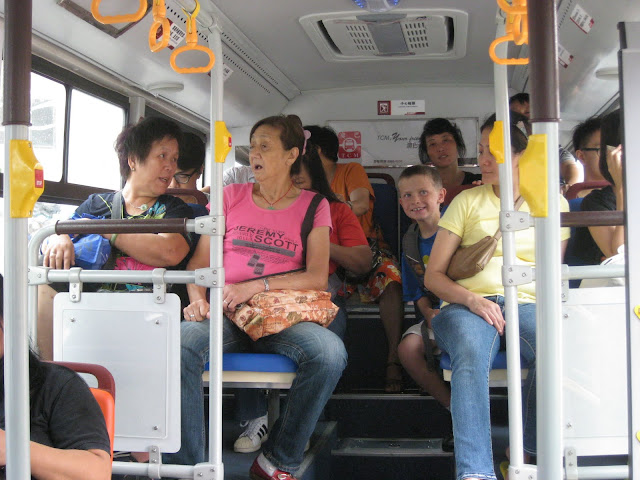 We finally made it back to Taipa just as the rain stopped. The boys and I all cheered and high-fived each other like we'd just won the Amazing Race when we sucessfully got off the bus at the grocery store closest to our house.  Who needs a taxi to get home in the pouring rain? Not us! But learning from my mistake, we still hit the grocery to break down some of those $500 MOP bills. I wouldn't want to get stranded at home if we needed a taxi right away. Emergencies happen (as we've already learned). I may be crazy, but I'm no fool!
By Heather Rose-Chase at August 04, 2011