In the Western world, the word junk generally has negative connotations. We have a junk drawer, our old cars are sent to the junk yard, and that pile of unwanted stuff in the basement or attic is definitely junk. The first time I heard that you could go on a junk ride in Hong Kong's Victoria Harbour, I laughed aloud, thinking it was some sort of trash barge journey. Of course, I'd seen the beautiful teak boat with orange sails when we went down to the harbour, but I never put the two together. 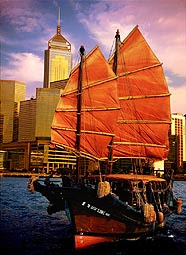 Six years ago I'd stopped into the Hong Kong Tourism Board who uses the image of the boat above as their logo. I asked how we could book a ride. I was told that rides aboard the Junk Duk Ling (which was built in Macau 50+ years ago) were complimentary, but they had to be booked in advance and could only be booked by a visitor, not a resident, verified by looking in your passport. Unfortunately, we were residents and couldn't book in. So when my cousin Josh arrived from America for a month's stay, we had him go in and book the tickets on his visitor's visa and student i.d. card with the help of my friend Robbi, who was also in the country on a visitor's visa. Michael had to work that day, but the boys, Robbi, Josh, and I had a great time cruising around the harbour on a rainy afternoon. Today anyone can charter the Duk Ling for the day by clicking here.

Junks get their name from the Malay word for ship or large vessel, djong, which the Portuguese pronounced junco and the Dutch pronounce jonk. So really it has nothing to do with what we'd consider garbage! They date back all the way to the Han Dynasty (220 BC), and were made especially hardy to withstand the typhoons that strike this area each year. They were the first ships to be made with more than one mast and water tight hull sections that ensured if the ship took on water, the sailors would have time to bail it out of the individual sections rather than just flooding the entire hull. In the past 1000 years, traditional junk design hasn't changed at all. However, more modern boats made in China without sails are still called junks. And though we actually saw the old Duk Ling during our own junk ride, we were on a very modern junk.

We said goodbye to our friends and boarded the MTR train to head to Lantau Island, destination Hong Kong Disneyland Hotel! After spending most of the day on a boat, starting with the ferry from Macau and then the five hour junk trip, all four of us felt like we were being rocked to sleep that night. We all had sweet dreams indeed!
By Heather Rose-Chase at August 22, 2011