On Michael's days off (currently Sunday and Monday), I try to completely avoid the computer. So when I checked my email today, I found quite a few people asking "So where exactly is Macau?" and "What is the difference between Taipa and the Macau Peninsula? And which one do you call home?" So, before I dive in and tell you about what we did over the last three days, I thought it would be smart to give everyone a brief geography lesson.

I'll do another post down the road to give you a brief history lesson, but the two sentence version goes like this: Macau was a Portuguese colony up until December 20, 1999. On that day, it was handed back to China and made a "Special Administrative Region," meaning that while technically part of China, it has high autonomy in all areas except foreign relations and defense.

So where in China is it located? Here's a map of Asia. 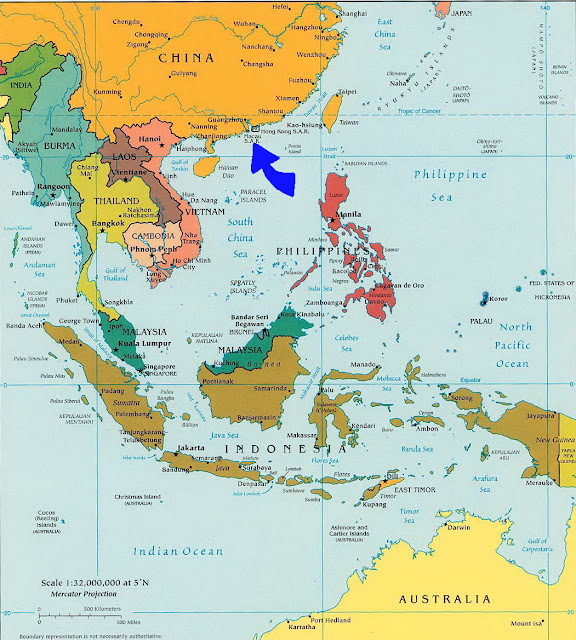 It's just a wee tiny dot at the end of that big royal blue arrow.
Originally, Macau was made up of three distinct land masses. To the north is the Macau Peninsula, which connects to Mainland China. In the middle is the island of Taipa, which is where we live. And then further south is the island of Coloane. Here is a map from 1986 which shows one bridge connecting the Macau Peninsula to Taipa, and a causeway connecting Taipa to Coloane.

To give you an idea of scale, the causeway is not quite a mile and a half long in this map. I found a photo of the causeway taken in 1980, which you can see by clicking here. So why isn't Macau still three separate land masses? Well, let me toss in a tiny bit more history. In 1857 gambling was legalized as a way to make money for the Macau government. And up until the last decade, it was the only place in Asia where it was legal. Though a couple other Asian countries have entered the gambling market, Macau is still the only part of China where it's legal. But it's a small place, which of course limits just how many casinos you can build.
So what did they do? They simply made more land. Using a process called land reclamation, they pulled up sand from under the ocean piling it into the area between Taipa and Coloane until it was completely filled in. They called the area the Cotai Strip, blending the names of Coloane and Taipa. The entire region is littered with casinos, looking very much like the Las Vegas Strip. Michael's theater, which is located inside City of Dreams, is on the Cotai Strip.
Here is a map of Macau today: 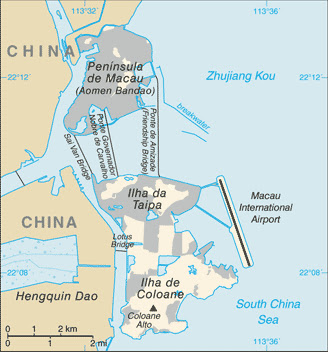 Our little Macau has grown up quite a bit! Here are some statistics for you:
In 1984, Macau measured 9.6 square miles.
In 1998, Macau measured 14.6 square miles.
Today, Macau measures 17.5 square miles (including that international airport that now juts out to the side).
Despite the fact that in the last 27 years Macau has almost doubled in size, it's still tiny. According to the CIA fact sheet, it's less than 1/6th the size of Washington D.C., and out of 250 countries in our world, it ranks as number 236, meaning that there are only 14 countries that can claim they are smaller. Those fourteen countries include Gibraltar, Monaco, and the Vatican's Holy See. My home country, the United States of America, ranks number three in size behind Russia and Canada.
I think Macau is trying to move up that list! The growth won't stop there. According to an announcement made in 2010, they plan to add another two square miles in the next five years. Remember the beautiful view we have? They'll be adding land where there's currently water. Here's the proposed plan: 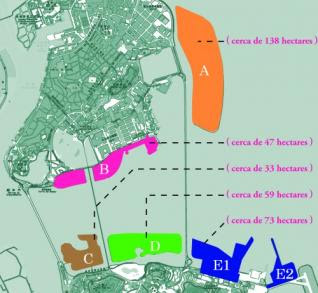 We live just south of the letter D. Here's hoping they start up at the letter A and it takes them a really long time to get through the alphabet!
Thanks for sitting in on this geography lesson, class. Tomorrow we'll all go on a field trip to a lighthouse built almost 400 years ago. Don't forget your signed permission slips!
By Heather Rose-Chase at August 02, 2011