My amazing husband is turning 40 years old on September 2nd. I find this shocking because I've been "turning 25" every year for over a decade and give 25 as my age so often I've actually started to believe it! So to hear I'm married to an almost-40-year-old... well, that's almost scandalous!

For the last year we've pondered what to do for this milestone birthday. It's a tough one, because unlike yours truly, Michael does not like a big fuss made over him. Yet sometimes a huge celebration is just the thing, especially for such a momentous occasion. So I was starting to talk to a couple people about locations, etc. when quite unexpectedly, we up and moved a continent away from all the people that one would expect to attend such a bash. Yes, sure, I could throw something together here, but inviting 100 of your employees is not the same as inviting 100 of your nearest and dearest. So what to do?

Earlier this year we met a man named Scott Harrison. He's the founder of Charity: Water. Five years ago he made it his life mission to bring clean and safe drinking water to people in developing countries. I'm familiar with a few water charities, but what made Charity: Water stand out to me was how they are able to use 100% of donations received to put directly toward building wells. All their administration costs are funded separately. Not only that, but they actually prove where the money is used by openly tracking and plotting the wells they dig on Google Maps with a GPS in the field which you can look at from the comfort of your own home. Pretty nifty.

Clean, safe drinking water. It's not something that I ever used to think about. After all, we've always been able to drink it straight from the tap, or from the front of the fridge, chilled and filtered. No big deal, right? But then we moved to Macau. Where the guidebooks say it's okay to drink the water, but the locals (and the various medical professionals that our son Nathan has seen while sick) have repeatedly told us to drink bottled water. So although I have what looks like clean water here in my kitchen: 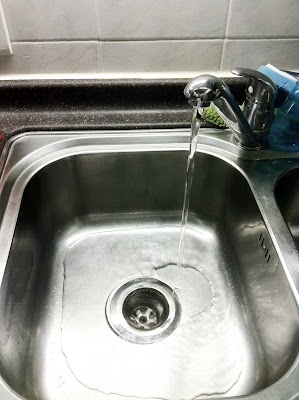 I have to cook with, make ice from, and drink water we pay for, delivered every other week in one of these: 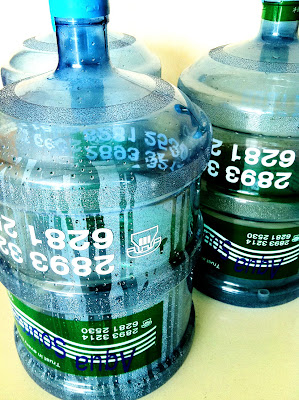 And when you have a kid like mine, currently on his sixth day of having a fever with all sorts of painful gastrointestinal issues, it makes you much more aware of what we put in our bodies. Especially the water.

Which neatly ties both Michael's birthday and Scott Harrison's Charity: Water together. Michael has decided to donate his 40th birthday to help kids and families in developing countries have clean and safe water. He doesn't want a party. He doesn't want a cake. He doesn't want any presents at all. Instead, he wants everyone to take the money they would have spent on a card, a gift, a phone call, or a plane ride to Macau to celebrate his birthday with him, and donate it to Charity: Water. Since he's turning 40, he's suggesting a donation of $40. But you can donate any amount. Who are we to limit your generosity?

Please click on this link to see Michael's page, learn more about Charity: Water, and help Michael donate his 40th birthday to people who could use it way more than him!


Water Changes Everything. from charity: water on Vimeo.