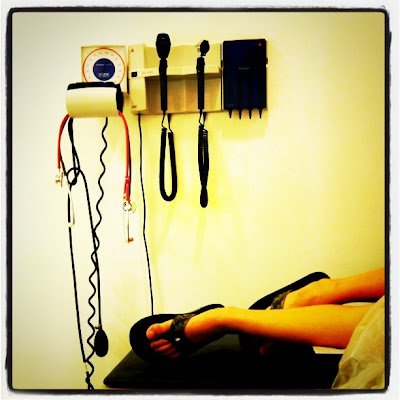 I've always said that my son Nathan is the one who never, ever gets sick. Yet he was the first of us to experience a hospital in Macau due to illness. And today, he was the first of us to head back to see a doctor a second time. Poor guy has been burning up for three days with pain in his belly, and then spent most of last night laying on the bathroom floor when he wasn't hurling into the toilet. Instead of rushing him off to the hospital like last time, I called to make an appointment with Hope Medical Center. Thankfully, they had an immediate opening. I'd just met one of the doctors who work there a few days ago, and we were both surprised when she was the one who walked through the door to examine Nathan. Macau is such a small place!

This time I didn't call Michael's assistant to help us out. We've already been to Hope Medical Center once when Michael got a physical for his Scuba certification, so I knew where it was. However, in the six weeks we've been here, I haven't once called a taxi on my own. If we're with Michael, he calls a taxi and we go as a family. If Michael isn't with us, then the boys and I walk or take a bus. Walking is free and good exercise, and the bus is almost free and builds character. But there was no way I was going to take a barfing kid on the bus. Last week we took a bus on a wavy, winding road down to the beach in Coloane and a little kid threw up. His mom was dying of embarrassment. I gave her a packet of tissue and a plastic sack that I (wisely) always carry in the bottom of my bag for just this kind of incident. Though we didn't share a common language, I could read her gratitude for this small gesture loud and clear. People tend to be kind when something like that happens. But I really don't ever want to be that mom! So, a quick call to the taxi company and our shiny black chariot took us directly to the door of the clinic. This time he was prescribed medication that I don't have to Google because I've actually heard of it. Right now he's fast asleep, resting comfortably. Hopefully he's building up some good antibodies to all the little gastrointestinal bugs that are common in Macau! And hopefully the rest of us are spared!
By Heather Rose-Chase at August 23, 2011

Email ThisBlogThis!Share to TwitterShare to FacebookShare to Pinterest
Labels: Medical