Before we could make Macau our new home, we had to have a little closure on our old home in Los Angeles, California. Which meant a lot of goodbyes.

Since we tend to move pretty frequently, the people who have known us for a long time tend to do rather well with us popping in and out. I'm huge on communication and keeping everyone informed and together, even before there were blogs and Facebook and Twitter (and email!), which helps everyone to stay up to date even if we're on different continents. For our newer friends, however, this move came as quite a shock. After all, we'd lived in the same city (though not the same house) for the past 6 years. If we didn't talk about it, you never would have known that we'd moved eleven times in the ten previous years. And it's not like we were actively searching for opportunities overseas. This chance came at a time when there was precious little else on the horizon. So we took it.

We have two boys. Nathan is 10 and Benjamin is 8. The ten year old has lived in Japan and Hong Kong, and the eight year old came a year before we moved to Hong Kong. But their roots had grown deep in Los Angeles, our time in Hong Kong just a hazy memory. I was expecting this to be very hard on them, but they have surprised me, showing maturity in unexpected ways. I think the most difficult thing for them about this move was the 72 day separation from their Dad as he went ahead of us to Macau to start the job and find a place for us to live. Surprisingly they've been okay with saying goodbye to friends and family, but had a much more difficult time saying goodbye to places and things.

During the almost three months Michael was in Macau without us, my job was to get rid of most of our belongings and put the rest in storage. This was a tiring job that brought a lot of physical and mental anguish. All I can say is that I'm glad it's over. Michael came home for 10 days to help me get the Los Angeles house in order to hand back over to the owners and for a little goodbye celebration that two dear friends decided to put together on our behalf.

Originally I implored them to just hold a little gathering in a local restaurant, thinking we'd get maybe 20 or so people. But they insisted on a larger venue, a local park. And I'm glad they did because we had nearly 100 people drop by to say hello and goodbye over the course of four hours. We took a group pic about halfway through the party, which meant we missed about 30 others who dropped by later. 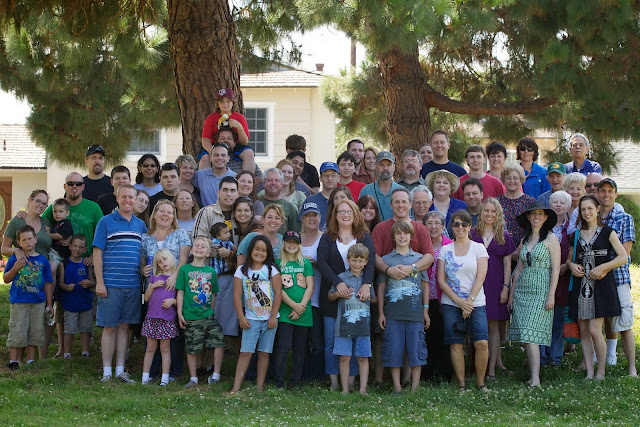 It is overwhelming to see so many faces of loved ones there to see us off, and from all different areas of our lives. It felt a bit like a wedding reception... I only had maybe 5 minutes with each guest! But it was still fun, and all the kids who came had a great time playing together while the adults chatted and caught up. I didn't cry, not even once. I think I was simply too tired and numb from the previous month's work preparing for the move without my husband. I'm sure I'll sit down and have a good cry before you know it.

After we wrapped up at the party, we hit the mall to buy us all shoes, and then we were off to stay at the Embassy Suites at LAX. Now that family and friends can't actually come into the terminal with you at the airport, we decided it would be easier all around to just check into a hotel that offered a free shuttle to the airport. And boy did we need it... we had a total of 16 pieces of luggage going with us!