I know we had crazy storms in Hong Kong, but spending the last six years in perpetually sunny and beautiful Los Angeles have dimmed my memory. The last twenty-four hours in Macau have brought with them a storm that has totally blown me away!

Yesterday the boys and I had been invited to a swimming playdate at a fellow expat's apartment complex. My best advice when moving to a new country is to say yes to every invitation. Even if you're shy and uncomfortable meeting new people. Even if the person inviting you is not someone you would normally hang out with in your native country. Even if at first glance you have nothing in common with them. You've always got at least one thing in common: you're both living in the same foreign country. You may think you're doing fine on your own and don't really need to get out and make friends, but there quickly comes a time when you start to feel a little crazy with overwhelming desperation to speak in your own language to someone going through the same things you are. It's best to jump in with both feet and make friends right off the bat before you get to that desperate stage and no one wants to be around you!

The person doing the inviting in this case has two boys the same ages as Nathan and Benjamin. Of course I jumped at the chance to get together, if only for the boys' sake. Despite coming from different countries and backgrounds, the four boys instantly bonded and ran off  to a bedroom to speak the common language of little boys everywhere: video game. I spent the day chatting with my new friend, excited to find someone who has had a very similar path in life as my own: constant moving and a frequently absent husband who works in show biz. We got so caught up in talking that we forgot about the swimming part until the late afternoon.

After getting changed and doused in sunscreen, we made our way to the pool. It was nice and sunny and not exceptionally hot. The kids hopped in and splashed around while the two adults kept talking. Then I noticed the sunlight disappearing. Odd, considering it was only 5:30 p.m. I took off my sunglasses and looked up to find giant gray clouds covering the sky. The pool lifeguards started blowing their whistles, motioning for everyone to get out of the pool. By the time we'd dried off the kids and wrapped them in towels, the sky had gone dark as night. We stepped inside just as the clouds let go and rain started pounding down. There was fierce thunder and lightning. My new friend has a car, and generously offered to drive us home. One thing we've learned about Macau: at the first sign of rain, all the taxis disappear!

We got home and I checked the various local weather websites, such as the SMG and the Greater Pearl River Delta Weather Website. Turns out that little storm we were experiencing rated a Typhoon 1 signal, meaning there was a cyclone within 800 kilometers (~500 miles) that may later get even closer to Macau. Here's a graph of the storm at that time: 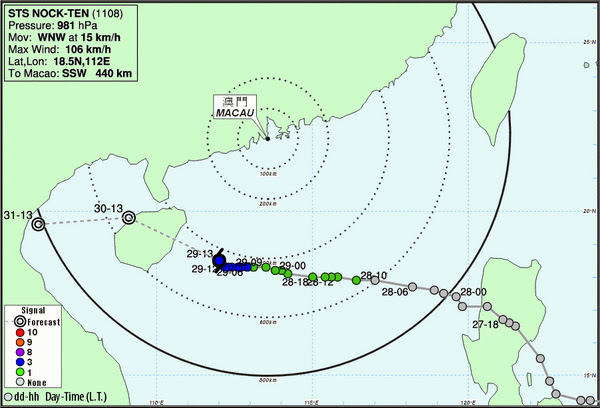 You can see it started out as a storm in the Philippines, and gathered strength as it worked it way over toward the predicted destination in Vietnam. I read up on the warnings that said they were expected to issue a Typhoon 3 signal at some point early Friday morning (meaning the winds will range from 25- 40 miles per hour, with gusts at ~70 miles per hour). Michael walked home from work during a lull in the rain, hot and sweaty in the late evening humidity and heat.

This morning at 6:00 a.m. I was awoken by what my ears could only identify as hail. Obviously it doesn't ever get cold enough here for hail, so I pulled apart the blackout shades to see rain flying at our bedroom window, horizontal to the ground! I could see no further than perhaps a foot, and the sunlight filtering through the rain reminded me of being in a snowstorm, everything was bright white. The fan vent in our bathroom window was sucking out air and then pushing it back in, making our bathroom door open and close, and I watched the fan rapidly spin first in one direction, then the other. Michael slept through it all, and knowing he'd worked late the night before and would work late again tonight, I didn't wake him up. After all, this may be our first typhoon, but it won't be our last!

At about noon after Michael had already left for work, the rain started pounding again. This time the south side of the house was getting that horizontal rain hitting so hard it sounded like hail. The boys and I sat and watched the world disappear again. There was absolutely nothing to see other than the spiky raindrops hitting the window, but we looked like three people watching a thrilling film, unable to take our eyes off the screen. The noise was so loud, almost like running a bunch of hair dryers aimed at your head. And the crazy thing is that there are five levels of Typhoon Signals, and we were only on the second level! Good thing we're coming into this a bit slowly! Check out yesterday's post to see the storm rating system used here in Macau.
By Heather Rose-Chase at July 29, 2011

Email ThisBlogThis!Share to TwitterShare to FacebookShare to Pinterest
Labels: Weather