Well, not Madonna exactly. But a collection of 50 exhibits showcasing Madonna memorabilia was recently on display at Macau's City of Dreams.

Now, I'm not going to lie and tell you I'm a huge Madonna fan. At best, I'm ambivalent about her music. Her career is interesting to me because of the constant reinvention that she goes through (or used to go through). I am, however, a huge fan of the theater. It's what I studied in school and how we make a living. I'm also very interested in Eva Peron, having read just about every biography on her, including one about what exactly happened to her body during the revolutions after her passing. She fascinates me. When Madonna was cast as Eva Peron in the 1996 film adaptation of the musical Evita, there was a loud hew and cry that a pop musician could never fill such an iconic theatrical role. But personally? I applauded the casting. It was an artful choice. Madonna and Eva have a lot in common.

It's not my favorite movie ever, but I loved the film when it came out. I saw it several times in the theater. What I couldn't get enough of were the incredible costumes designed by Penny Rose. They did so much to transform Madonna the sexy, raunchy pop star into Madonna the glamorous, ladylike film star.

When we first arrived in Macau, there was advertising all over town promoting the Simply Madonna exhibition. I didn't feel compelled to see it until someone put a brochure in my hand with a list of items on display. A large number of them were costumes from the film. Suddenly I felt compelled to go!

Michael and the boys indulged me (barely) as I lingered over each glass case with the amazing gowns, shoes, hats, and jewels on display. I passed over MTV Music Awards, cone bras, and signed contracts, moving throughout the City of Dreams complex to get to the next Evita display. I was happy to see two of my favorite costumes from the film in person.

The first is the bias cut cream silk dress with lace cutouts worn during the dream sequence where Eva and Che waltz. I don't usually care for dream sequences in musicals, but I love how they are passionately fighting while they passionately waltz. The dress has so many seams that allow it to hug her body without being vulgar and give it grace and fluidity while she's dancing. Here's the dress at City of Dreams: 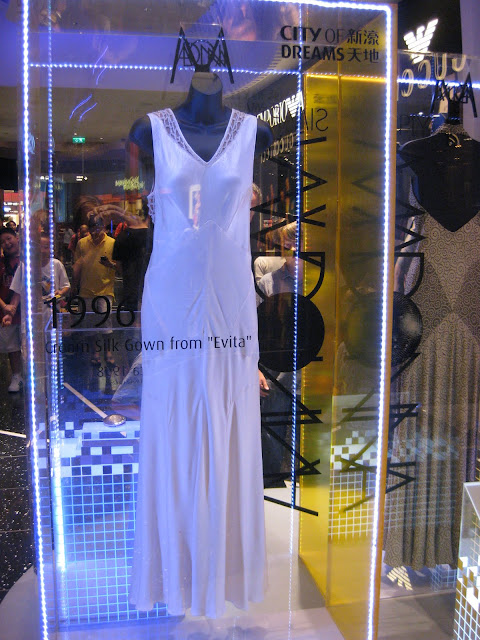 And just so you can see the dress in motion, I found the clip from the film, which you can see here:

The second costume that actually made me gasp when I saw it in the film is the one worn during the  inauguration scene. It's dazzling and visually marks a turn for her character when she goes from clawing her way up to finally arriving at the top (before she set her sights even higher). She turns up the glamour with this gown, her character looking like a princess instead of the showy second-rate movie actress that she was when she met Juan Peron. Here's the dress hanging on a mannequin: 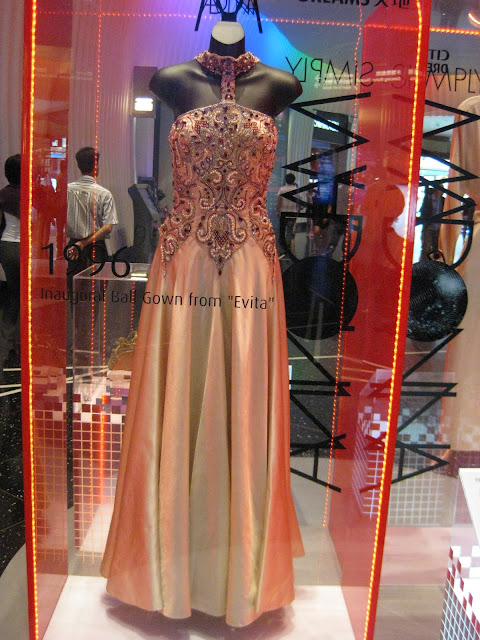 I oohed and ahhed over the intricate bead work, but felt a bit disappointed that it wasn't quite as breathtaking hanging in this static position as it was in the film when she made her entrance up the stairs. Here's a clip from the movie, just watch the first 25 seconds to see the gown in its glory:

I enjoyed the exhibit, but I'm afraid that the hardcore Madonna fans out there probably found it lacking. I'm sure they were thinking, "Too much 1940's couture, not enough cone bras!"
By Heather Rose-Chase at July 27, 2011

Email ThisBlogThis!Share to TwitterShare to FacebookShare to Pinterest
Labels: City of Dreams, Film