In my next post I'll tell you about experiencing our first typhoon here (woo-hoo!) but I wanted to take a moment to explain the weather rating system. Macau has a subtropical climate, meaning very limited precipitation in the winter and a summer season that lasts longer than the others which is prone to high humidity and cyclones. Spring and autumn are short. The wind in summer blows the opposite direction than the wind in winter, which classifies this as a Monsoon Region.

From 1861 until 1952, the Portuguese Navy was responsible for recording meteorological changes. In 1952 the Macao Meteorological and Geophysical Bureau or SMG was founded. In Portuguese that translates to Direcção dos Serviços Meteorológicos e Geofísicos, which is where the shortened “SMG” comes from).  They are responsible for studying the climate, weather analysis, and providing forecasts and warnings. From Hong Kong they borrowed a system of signals that can be understood in any language to let everyone know what actions need to be taken due to the weather. They display these signals at the Guia Lighthouse and Monte Fortress, on electronic signs around town, in the lobbies of buildings, at schools, and in other public places.

I found this map on the SMG website. They use it to plot tropical storms as they move across the region. 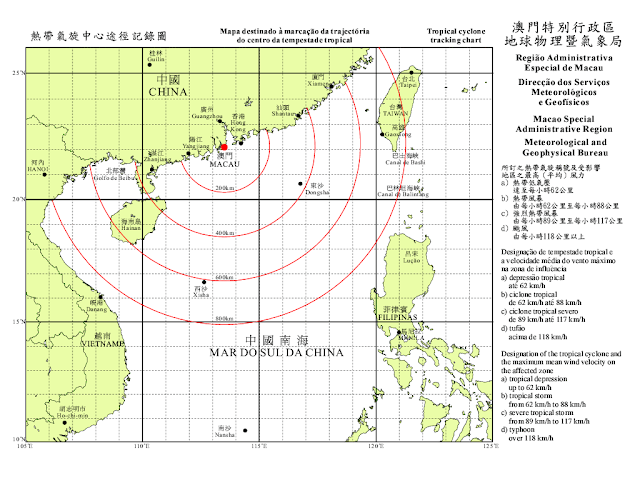 In the lower right corner, you can see the criteria they use to classify the storm, from a tropical depression all the way up to a typhoon based on the wind speed.

When it comes to classifying a typhoon, they also use proximity to Macau to determine which signal to hoist. I love that word, don't you? Hoist! It comes from raising something using a system of ropes and pulleys, like a sail on a boat or a piano that has to go through an upper story window. Fifty years ago the only way to let people know about these warnings was to literally hoist a signal up onto the lighthouse and fortress. Even though they now flash the symbol on the website or television, broadcast it on the radio, or put up a sign in the hotel lobbies, the term hoist is still used.


The first signal is the Typhoon 1, which looks like a large uppercase T. They hoist this signal when the center of a tropical cyclone is within 800 km/ 500 miles of Macau. When this happens, you should check for anything outdoors that may be carried off by the wind and injure someone. Keep boats and small watercraft in nearby shelters.

The second signal is the Typhoon 3, which looks like an uppercase T turned upside down. (We're currently under this warning as I type this.) They hoist this signal when the center of a tropical cyclone is on a path that cause winds in Macau to range between 41 - 62 kilometers per hour (25-38 mph) with gusts as high as 110 km/h (68 mph), and usually when the center of the tropical cyclone is within 300 km (186 mi) of Macau. When this happens, all ships and sailing crafts should be led into safety shelters or ports. Residents are advised to check safety of doors and windows, and make sure rain drains are clear. Check the radio and television for bulletins.

The third signal jumps up to Typhoon 8. This signal is based on either a single triangle or two triangles that go in the same direction. The number of triangles and the direction they point indicate which direction the wind is blowing, as you can see in the photo below. They hoist this signal when the center of a tropical cyclone is nearing and winds in any of those directions range from 63 to 117 km/h (39 - 73 mph) with gusts as high as 180 km/h (112 mph). When this happens, school is suspended and businesses close shop. If the children are at school, they shelter in place there. Doors and windows should be secured, and bridges may be closed to all traffic. Television and radio stations interrupt programming and broadcast advice round-the-clock. 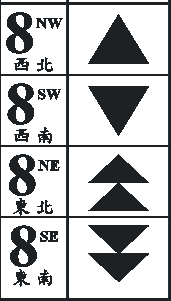 The fourth signal is Typhoon 9, which is two triangles facing opposite directions, looking like an hourglass or black widow spider's belly. This is a warning that the center of the cyclone is approaching Macau, and the region may be severely affected. When this happens, they advise people and cars to take shelter, to reinforce doors and windows, and listen to the media for advice. A temporary calm in the storm indicates the center of the storm is over Macau.

The fifth and final signal is Typhoon 10, which looks like the plus symbol in math (or the logo for the American Red Cross). This means the center of the cyclone is imminent in its approach, and sustained wind speeds are exceeding 118 km/h (73 mph) with gusts even higher than that. The advice on what actions to take is the same for Typhoon Signal 9.

I found this image on the web showing the old metal symbols that they hoist up on the Guia Lighthouse. We'll be visiting there soon to see them in person! As soon as this weather clears up, I hope! 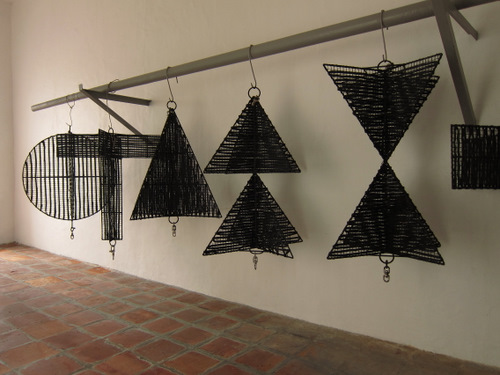