The long and winding first day

We were lucky enough to schedule our arrival into Macau to coincide with Michael's normal days off, Tuesday and Wednesday. This means that we had two full days to wander around together with Michael playing tour guide and me trying to download the location of everything directly into my brain on the first try. I was blessed with an innate sense of direction and a strong memory for places (which doesn't extend to names unfortunately). But the part of Macau we live in, Taipa, is a crazy jumble of a central area laid out in a grid pattern, surrounded by lots of wavy streets. And with nothing in English... it's going to be a challenge. 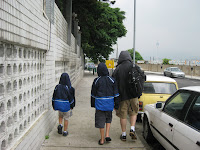 After a great night's sleep, we all woke up ready to greet the day. With an empty fridge, cupboards, and bellies, our goal was to find a place to eat breakfast, visit some groceries to get basic sandwich stuff for lunch, and then make our way to immigration to get the visa in our passports that allows us to stay here legally for two years instead of one month.


Taxis here are quite cheap. It's a small place, so you can get just about anywhere for under $5 USD. However, I wanted to employ my sure-fire remedy for jet lag, which is to get outside and walk in direct sunlight. So off we marched into the downtown area! Michael took us to a place called The Savory Crab, which despite the name, is actually a delicious breakfast joint. The boys and I have missed Michael's pancakes while we've been apart, so these were a nice treat. 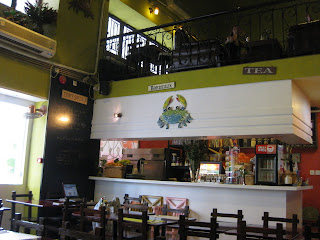 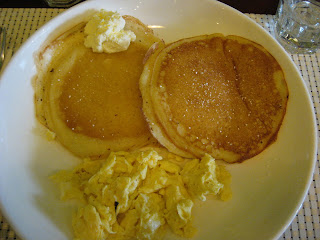 After that, Michael marched me up and down all the streets, pointing out a tiny home goods store, a market, a noodle shop, and a park. It was total information overload! We did hit one grocery, where I filled a cart with toilet paper, paper towels, bread, milk, OJ, jam, peanut butter, pasta, pasta sauce, a pot with a lid, and salsa (hey, I'm a girl who can't live without Mexican food!). We arranged for free home delivery of the non-perishables and took the cold stuff to go, hailed a cab, and went back home.
﻿﻿
While I made us all sandwiches before our appointment with immigration, Michael realized that he'd somehow lost his company-issued phone. We were supposed to meet someone from HR at the stage door of the theater, who would hook us up with a driver to get us to the right spot in immigration. We left our flat in a hurry to get there early so Michael could tell his assistant to cancel his phone and get a new one, quickly. In the most random turn of events, we were met at the stage door by the HR rep who had printed out an email from his assistant saying that someone named Sandy had called to say they had Michael's phone and we could pick it up at our convenience. We had the company driver make a detour to Sandy's address, which was no where near any place we had been that morning. Since Sandy spoke no English, we didn't get the story of how she came to be in possession of Michael's phone, but we were so grateful to have it back none the less!
The night before we left the U.S., we made a run to Costco to get some extra passport photos for our visas. On our way to immigration, we showed them to the HR rep, who sighed and said they were the wrong size. So we made yet another detour to a photo shop to get the visa pics for the boys and I. Nothing like being totally unprepared to have your photo taken! I think there is a rule somewhere that says you are not allowed to look good in a passport photo or else customs won't let you through. Yeah, yeah! I'm going with that! 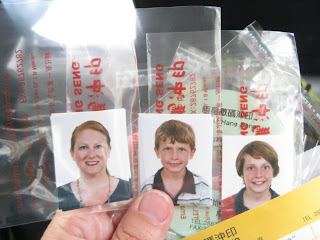 We finally made it to immigration, where we had to take a number and then find the corresponding waiting area. We were facing a bank of televisions, all looping the same somewhat graphic video about human trafficking, over and over. It was a cautionary tale to remind everyone to remain in firm control of your passport, lest you end up being sold into slavery. And it scared the kids half to death!
We finally got called up and all Michael's documents were checked to make sure his work visa was valid, and then the boys and I got our accompanying family member stamps. Which means we're now legal residents of Macau and can stay here for up to two years before the visa has to be extended. Hooray for us!
The driver deposited us back at home once again, and I cooked up spaghetti in the brand new pot, and we ate our first meal in our new home. With no time to even think about slowing down and napping during the day, we kicked jet lag's booty and went to bed at a fully reasonable hour. ZzzzZzzzZzzz
﻿﻿
By Heather Rose-Chase at July 13, 2011