We Chases have a little tradition that must be upheld every time we move to a new place. Within two weeks of stepping over the welcome mat, someone in the family has to get sick or injured to the point that a visit to the ER becomes necessary. It certainly isn't my favorite tradition by any means, but after repeating it for the last 12 moves, we can't seem to escape its pull!

Early Thursday morning, 10 year old Nathan started throwing up. This alone was a bit surprising, as he has an amazing immune system, and very rarely gets sick. The last time he was sick was 14 months ago. He had strep throat, was prescribed amoxicillin for only the second time in his life, and developed a very serious allergic reaction to the penicillin-based antibiotic. No fun.

Stomach bugs in foreign countries can be very serious. Michael caught a little something while we were living in Hong Kong six years ago, tried to ignore it, and ended up hospitalized due to severe dehydration. In Macau, we've been told that the tap water is "essentially" safe to drink, but we should ease ourselves into using it, sticking to delivery of bottled water that comes each week as much as we can. Restaurants serve you bottled water which the waiter brings to your table unopened (which you must pay for) or hot tea which has been boiled (complimentary). We've been pretty careful with our digestive systems, making sure we're all consuming probiotics on a daily basis in one form or another, and thanks to the heat and humidity I'm forcing everyone to drink at least 2 liters of water each day. 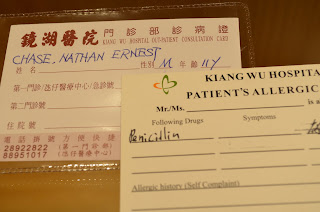 This thing with Nathan really worried me. Normally a person might throw up a few times and get whatever it is out of his system and start to get better. With Nat, I watched as the clock kept ticking, and he kept vomiting. After a few hours, he became one with the bathroom floor, crying in pain, sweaty and pale. I made my first phone call on my brand new mobile, interrupting Michael from a meeting to ask if he could please give me the information on the company health insurance, as it looked like I was going to need it. He in turn called his assistant to ask if she would pass the info on to me, and then went back into his meeting. She called me to tell me where to go and what to tell the taxi driver. Then she said, never mind, just get a taxi and call her back and she'd tell the driver herself. Then she said, never mind, she's on her way and will be downstairs in 15 minutes to accompany us to the hospital.

I had imagined a date in the very near future where the boys and I would be dressed all neat and tidy, presenting ourselves at the theater, meeting Michael's staff, making a sparkling impression that would be remembered for all the right reasons. Instead, we made our way downstairs just as Michael's assistant pulled up, and Nathan promptly threw up. There was no neat and tidy, she got Nathan bent in half, moaning and puking in the back seat of the taxi, brother Benjamin tearful, and me, hair wild, no makeup, in a ratty tee with worry creasing my face. Nice first impression, huh?

Michael's assistant, Jennifer, is native to Macau and speaks Cantonese (local dialect) and Mandarin (mainland China), and passable British English with a heavy accent. She got us to Kiang Wu Hospital, which is one of only three in the region. She walked me through the process of registering. No one at the registration desk spoke English, though the form I filled out did have an English version, which Jenifer filled out for me in Chinese. Then we were sent to triage, where they took Nathan's temperature and blood pressure. And finally we waited for our number to be called and flashed on the screen, which is all very similar to what you would experience in the U.S. I didn't take any photos, but I did find a quick video clip of the waiting room on YouTube, which you can see by clicking here. As you can hear, the numbers are called in Chinese.
When we were finally called in, Jennifer came with us. Which was a good thing because the doctor's English was so limited it was comical. Here is a conversation we had that left me blushing furiously:

He did a very thorough exam, pressing and poking Nathan all over, asking questions which Jennifer translated. Finally he gave his diagnosis: we've just arrived to Macau and our bodies are not used to it. He said to watched for fever or severe headache (and to head back immediately if either of those two things popped up), stay inside with the air conditioner running for a couple days, and take three medications he prescribed, which I had to go to the hospital dispensary to collect. The pharmacist spoke no English, but the directions on how to take the medicine and the brand names were in English. I had to pay the hospital bill in cash before we left, which scared me just a little, knowing I only had the equivalent of about $300 USD in my wallet. My fear was needless, as Nathan's Emergency Room visit and three medicines cost the equivalent of $19 US dollars, which I can submit to be 100% reimbursed through our insurance. Crazy!

We left the hospital and walked a few blocks to a taxi stand. Nathan had to stop and throw up a couple more times in the overwhelming heat. Jennifer accompanied us all the way back home before she made her way back to the office to let a very shocked Michael know what she'd done. That girl? Worth her weight in gold, many times over! She and her husband of two years don't yet have children of their own, but based on the way she coolly and calmly handled the situation, I'd say she's gonna make a great mama.

I put Nathan in bed and then googled all the medications before giving any to him. One was ibuprofen (like Advil or Motrin), one was a strong probiotic that is frequently prescribed in China and India, and then there was a liquid which stops nausea and vomiting. In carefully reading several websites, I noted that though widely used throughout Asia, it has never been approved for use by the United States Food and Drug Administration (FDA) in America. While pondering whether I should give it to him or not, he got up to throw up yet again, crying in agony. I gave him the medicine. He hasn't thrown up since.

You could say that the silver lining of our little tradition of hospital visits allow us to become well versed in the local medical system very quickly, so that we're all set for any future incidents. I have learned you can find English speaking doctors in the clinics where you make an appointment, but the emergency rooms are sorely lacking. And everyone I've spoke with says that for anything serious, go to Hong Kong. Which is fine, I love the hospitals in Hong Kong, they are great. But they are either an hour's boat ride away or a 15 minute, $300 US helicopter ride away. I'm hoping and praying that we're healthy and well our entire time here, never needing to take either of those options for anything other than a fun day trip to our former home.

We were given a "Welcome to Macau" book with useful information by HR, but everyone has told us we'll get by through trial and error, figuring it out as we go. I remind myself eighty-four thousand times a day: I love adventure. Adventure is good. This is the biggest adventure of my life to date.

While I do love adventure, I am so grateful for Jennifer!
By Heather Rose-Chase at July 24, 2011

Email ThisBlogThis!Share to TwitterShare to FacebookShare to Pinterest
Labels: Medical