While I'm in the house, foot propped up on ice and a pile of pillows, nursing this: 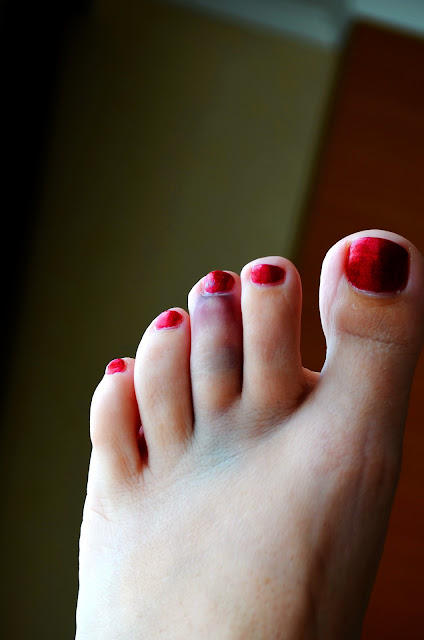 I sent the kids down to the "back yard" to play. 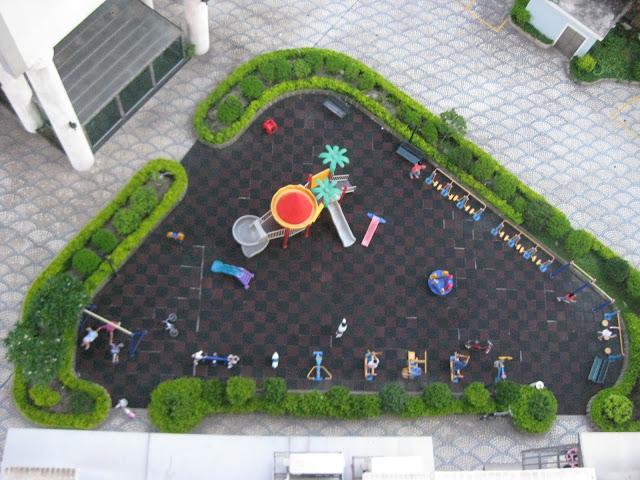 Can't spot them from eight floors up? Here they are: 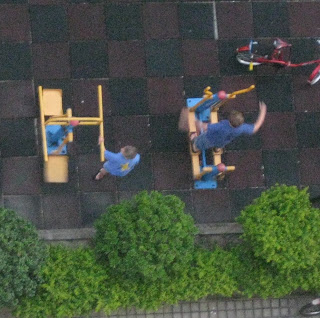 Our complex consists of six high rise buildings. Though that seems like a lot, each floor only has two apartments on it, so it's not all that crowded. We have this playground that beckons the boys daily, a huge swimming pool, tennis courts, and a gym, all on a level that is mostly restricted from cars (basically loading and unloading only, no through traffic). When the boys' bikes arrive with the rest of our stuff, they'll be zooming around down there with the rest of the kids we see every day.

We are in a very multicultural complex. In addition to local Chinese, we also have residents from Russia, Portugal, Canada, Germany, France, and Australia that I've met so far. Everyone I've spoken with seems to think we're the only Americans currently living here.

Beyond the fact that it's so awesome, Michael picked this place because it's a little removed from the center of town, and away from the two major expat apartment complexes. Taipa (the island we live on) is a small place, so it's inevitable that you'll run into someone you know every time you go to the grocery store (we have! Every time!). But Michael really didn't want to be running into his employees in the hallway on his day off, you know?

The irony is that on our second night here, Michael was in the boys' room putting clothes away when he got a call from the company General Manager. He said, "Nice shirt you're wearing there." Michael spun around and found his boss, the GM, on the same floor of the nearest building, waving at him. For the nearly three months Michael was here ahead of us, he was sharing a temporary flat across town with the GM, who was also waiting for his wife and children to arrive. They were both looking for permanent homes with different real estate agents. The GM told Mike he'd found a place at "Tjoi Long Meng Chu." Mike told the GM he'd found a place at "Sea View Park." Guess what? Same place, different language! The boys' room and our dining room face their living room. Michael will not be calling in sick and then throwing a party!
By Heather Rose-Chase at July 25, 2011