This entire school year I was under the impression that the last day of school was June 23rd. It's written on every calendar in the house and on my Google Calendar. Imagine my surprise when I found out that school actually gets out on June 16th! I panicked a bit, as I need every spare minute of time without the kids if I'm going to accomplish everything before Michael gets home on June 30th! I called my parents who live about four hours away and volunteered them to take the boys for a week, which they are happy to do. Whew! In the meantime, there are a lot of end-of-the-school-year things going on which frustrate me to no end. Mainly because I get in the groove and I'm making lots of progress, covered in dust, wearing cut-offs and sporting a sloppy bun on my head, and I have to stop, shower, change into something presentable and do hair and makeup. This is when it would be so nice to have a partner around to attend all these little events so I could keep working!

Today Benjamin had a field trip to our local Farmer's Market. It's only the second time as a parent that I've declined to be a chaparone on a field trip (the last time was right after I had surgery and Michael went in my place). And, I also declined to chaparone Nathan's field trip later this week. I love to have a strong presence at my boys' school, working in their classrooms and getting to know their friends and classmates, and leading little groups of them on these educational trips. I think it sends a message to them that I believe school is important, not to mention that they are important! I'm so grateful that unlike many of my friends who work outside the home, I get to pour as much time into the local school as I desire. Barring any crazy deadlines, I can write and run our production company in the middle of the night in my pajamas and be there for the boys in the day. So I actually felt pretty bad to tell Ben no. He was stunned and sad. Ugh. But today I had an appointment with a shipping company to come survey our household goods, and then I had to go look at storage units now that I have some actual boxes packed up and ready to be put into storage. But even if I didn't have all that, I'd have still declined so I could keep working on this never-ending task. Grrr. I figure that I'm about to take both the boys on the ultimate field trip to a foreign country, and let my guilt go.

Benjamin was allowed to bring up to $5 in spending money for the Farmer's Market. I told him he had to use his own money, which he did. Most of his classmates got sacks of kettle corn or sticks of honey. You know what Benjamin spent his money on? 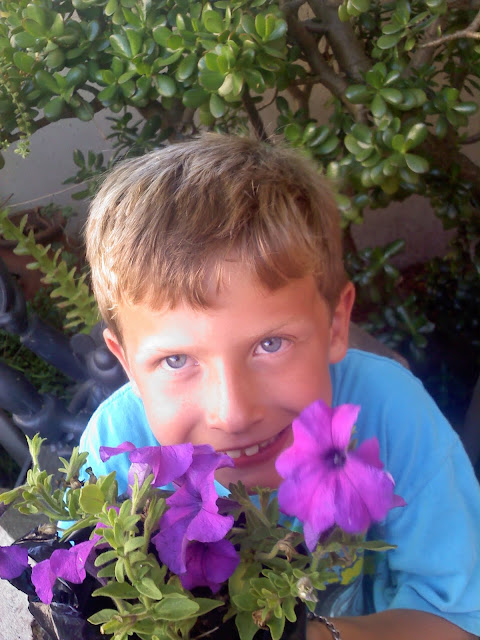 Flowers!
It made me think of one of my very favorite childhood books, Ferdinand the Bull. Ben said he wanted to get roses because my last name is Rose, but they were out of his budget. He's such a sweetie and I just want to grab him and squeeze him tight and never let him go.
Here's the 1938 Oscar-winning Disney animated short of Ferdinand the Bull. I had the audio of this on a Disney record, which I played over and over. While watching it, I realized I still have almost all of the words memorized. I need to read this story to my boys if I can find a copy of the book. One more thing to put on my list! Maybe I'll get around to it by the time they are teenagers?
By Heather Rose-Chase at June 08, 2011