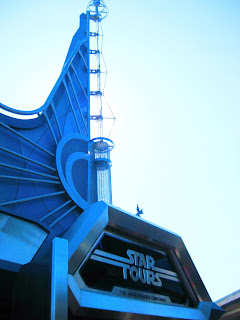 Though I frequently poke fun and say it was my husband who forced me into being a Star Wars fan, the truth is the galaxy far, far away was close to my heart from an early age. I was at Disneyland during opening weekend of the original Star Tours way back when I was a kid, though I don't remember the first time I experienced it. The space flight simulator which originally opened in early 1987 has simply always been part of my memory. In fact, I'm one of those annoying people who can recite the entire original spiel (though I always refrain from doing so because I always find it annoying when other people do it). Star Tours has always been a favorite of the boys, its generally short wait a nice counterpoint to the long wait at the nearby Space Mountain coaster attraction.

Disneyland completely renovated Tomorrowland in 1998, and right before it opened to the public, they invited Cast Members to come to a special night at the Park where you could ride Space Mountain with the lights on, and walk backstage and stand underneath the Star Tours attraction while it ran with passengers inside. Personally, I hate seeing any type of Disney Magic revealed, which sadly can't be avoided while employed by the Walt Disney Company. My parents, however, do not feel that way, and they loved being our guests at the Cast Member preview. In 56 years of going to Disneyland, seeing Star Tours from backstage is probably their favorite Disney memory (You could ask them, but I don't think they've mastered the art of leaving a comment here, so you'll just have to believe me). 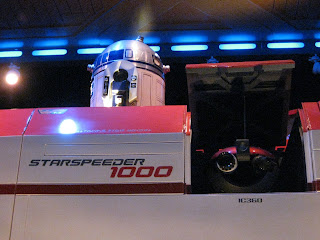 For the past year, Star Tours has been closed as they've been working very hard to re-imagine the attraction. Since it originally opened twenty-four years ago, it's had only one video with one possible adventure. The new attraction is a little bit like a choose-your-own-adventure book (though you don't get to choose), with up to 54 different possible experiences that unfold in front of you, giving you a different experience each time. And it's also now in 3-D. With seriously cool 3D glasses.
﻿
﻿It opened two weeks ago on a Friday, and though I really, really wanted to load the boys up and take them out there, I already had plans with Michelle to go on that Sunday. And I'm so glad I waited! The wait time on Friday was eight hours. The wait time for us on Sunday afternoon? A more manageable three hours. Which you can totally do with a ten year old and almost eight year old who are massive, die hard Star Wars fans. I was tweeting our progress in the slow moving line, hoping that the attraction was going to be worth the year-long plus three hour wait.
And you know what?
﻿
﻿﻿Oh my gosh you guys, it totally was! It was so much fun to experience it with the boys and Michelle and I hope they remember this first time for always. I'm just sad Michael wasn't here to experience it with us. But he'll get to. Oh yes he will! Because our Disneyland Annual Passports expire on June 30th. Which happens to be Benjamin's birthday. Which also happens to be the day Michael flies into LAX to reunite with his family. Which means we are picking him up from the airport and driving straight to Anaheim to ride Star Tours with him over and over until jet lag renders him useless and we have to go home (I'll be driving, thankyouverymuch).
Disneyland! Star Tours! I can't think of a better way to celebrate Benjamin's birthday and Michael returning to us! I can hardly wait!
You know who else can hardly wait? Darth Vader. Of course he has no interest in Michael, he just wanted Star Tours to hurry and open! Don't believe me? Well check out this video!