Without Michael here, the boys and I have been eating a lot of pasta, crockpot chili, and rice with chicken. Things that are easy to throw together and make the smallest mess possible. It's not as much fun to cook for  just Nathan and Ben. They generally appreciate that their bellies are being filled, but Michael appreciates the time and effort I put into creating a meal. The boys make themselves scrambled eggs and quesadillas (not together) on a daily basis. I can't tell if it's because they are hungry or because they are still enthralled with the idea that they can make their own food. On the stove! With fire!

But there is one thing that they have been begging me to make for months.

When I went away to college, I knew how to make a peanut butter and honey sandwich, toast, french toast, and over-easy eggs which I would eat on toast. I think that's it. I didn't know how to make spaghetti or rice or bake chicken or even brown ground beef. No clue whatsoever. I was still in the midst of my vegetarian years (which ended when Michael served me a steak. And I ate it. And then called my Mom. Who turned to my Dad and said, "She's gonna marry that guy."), so cooking meat didn't matter to me then. You know how most college freshmen gain 10 to 15 pounds? Not me. I lost it. I was never as skinny in my entire life as I was in college. Because I didn't know how to cook, I pretty much just never ate.

This was completely unacceptable to my cousin Darolyn who lived near where I attended college. She took me under her wing, inviting me over once a week for dinner and a lesson in how to make what we ate. The first thing we made was Slimy Green Burritos. I'm preeeetty sure that Dar just called them burritos and I added the slimy and green part. They were so simple, and because I hadn't had a home-cooked meal in months, I very nearly went into a bliss coma from eating them. Later on it was the first meal I made for my husband, and because he's awesome, he made up a theme song for them (See? Cooking is so much more fun to do for Michael! Who gets theme songs for their food?!?) and requested them weekly.

Years passed, and my cooking improved greatly. I still don't love to cook, but I do finally have the ability to create delicious food from scratch. Slimy green burritos fell out of rotation until sometime early this year when Michael started humming their theme song. The boys were intrigued, and I created their first Slimy Green Burrito experience. Their reaction? Much like my initial bliss coma!

Sick of our current rotation of spaghetti/chili/chicken rice, and realizing I have only about 25 days to use up all the food in my pantry, I obliged their request and made Slimy Green Burritos for dinner. It resulted in singing. They sang the theme song. They sang of their love for me. They sang of my great mothering ability and great beauty. My heart sang at being enthusiastically thanked (without prompting) for making them dinner. And now that they are in bed, I'm wondering why I haven't been making these darn burritos more often! Here I've been making all my own sauces and spice blends and not using canned anything, while all I needed for this is to open a couple of cans. Such little effort, such big dividends! 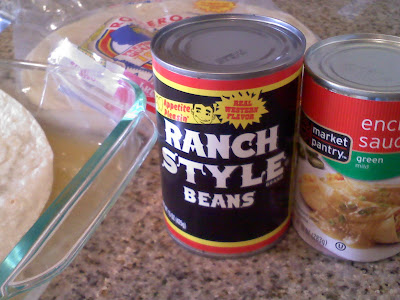 Preheat the oven to 350F, and pull out a big casserole dish and give it a quick spritz of oil. Pour about half the enchilada sauce into the bottom of the dish, and then dip a tortilla in it. Turn it over, really covering it in the sauce. Put a scoop of the Ranch Style Beans in the middle of the tortilla, and top with a small handful of cheese (I think jack cheese works good here, but cheddar or "Mexican blend" works great too). Tuck in the ends and roll up the burrito, seam down. Because it's nice and wet from the green sauce, it will stay rolled just fine. Grab another tortilla and repeat. Add additional green sauce as necessary to keep it really nice and wet. Fill your casserole dish and then pour any remaining green sauce over the top, along with a little cheese if you like. Pop it in the oven for 30-40 minutes until it's nice and bubbly. Serve and wait for the praises! 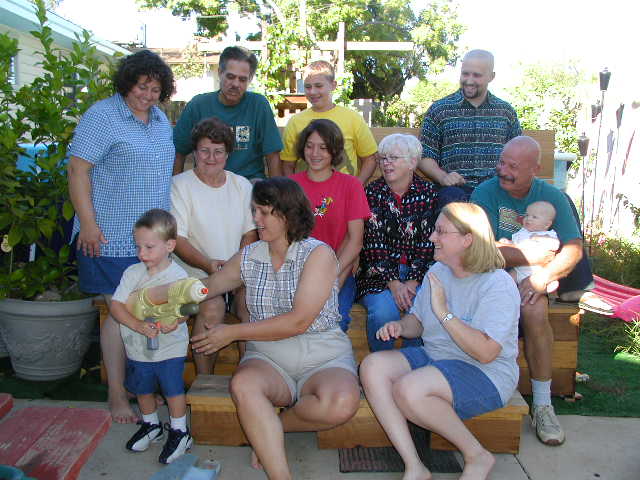 I was looking for a photo of Darolyn and I and came across this little gem I had to share. Dar is on the far left with the curly dark hair. This pic was taken at my cousin Kelly's house (Dar's sister, center front) about a month after Ben was born. Because of Ben's health, I was obsessed with getting photos of family members with Ben in them. My reasoning was that should the worst happen, I wanted tangible proof that Ben had been with us and held and loved by all the people who love me (note the protective grip my Dad has on him!). For this shot, I set up the tripod and timer and ran into place. Just as the shutter clicked, Nathan sprayed all of us with that water blaster. There's another more respectable shot with all of us looking at the camera, but this one is my favorite! That's my boy Nat, always stealing the show! Gotta love him!
By Heather Rose-Chase at June 10, 2011