Who could it be knocking at my door?

For the last several weeks, I've heard a gentle knocking on our front door. It's been loud enough for me to hear throughout our two-story house, and prompted me to stop whatever I'm doing to go see who is at the door. And every single time there was no one there. My reaction varies... I alternate between freaking out, getting annoyed, and wondering if I need my ears (or eyes) checked.

On Monday morning, Benjamin heard it too. The boys are not allowed to answer the door unless they see it is Mom, Dad, or one of the Grandparents (sorry for those of you who have come to our house and waved at the boys through the window, wondering why they just wave back instead of letting you in). So Ben came and got me to say someone was at the door. As I was walking to the door, I heard the knock clear and loud and I flung open the door to find... nothing.

On Tuesday morning I was sitting on the living room floor sorting through the never-ending stuff when the knock started up again. I wasn't even thinking about getting up to investigate from my spot on the ground, so I just looked up at the door, which has a half-round window in it. There is a wreath that hangs from the door, which is partially visible through the window. I didn't see anything, but I kept looking at it, thinking to myself, "Whoa, those windows are dirty. I don't think I've ever cleaned them. Better add that to my list of 8,672 things to do in the next 55 days." And then, I saw a little tiny bird hop onto one of the leaves on the wreath and give the window a sound pecking! 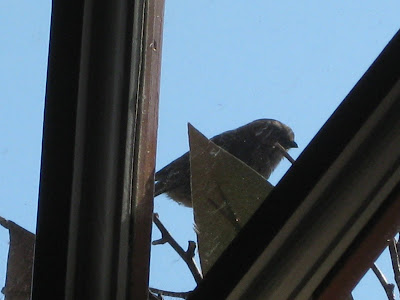 I was shocked! The bird was tiny! You could fit it in the palm of your hand and close your fingers all the way around it. But it was pecking the window with all it's strength, making a ridiculous amount of noise for such a tiny creature! I scrambled to my feet and grabbed my camera, but it just flew away. 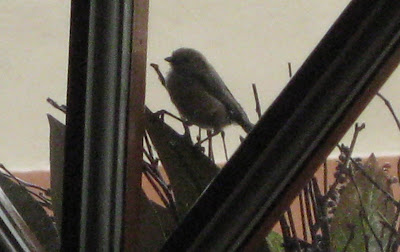 I was patient, and the bird came back, along with a friend. Together they pecked at the window and I got some pics. As soon as I said "Whoa" out loud, they flew away. I heard them again later, but since I knew what the knocking was, I didn't bother running to the door to look. 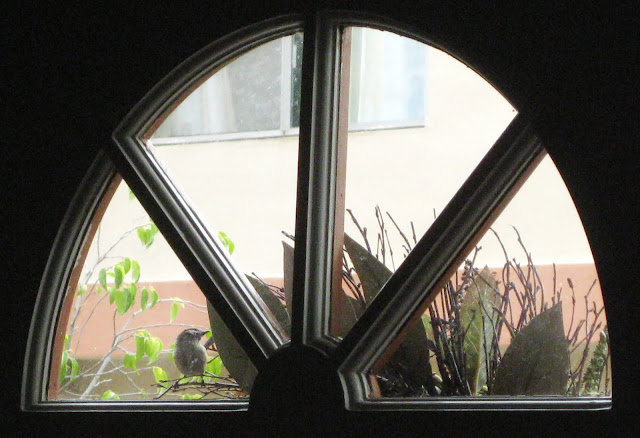 I forgot to tell Ben what I found out, and so this morning both boys discovered together that there was a bird pecking on the window and squealed with delight, telling me to hurry and look. Of course, their screams made the bird fly away. Ben was especially excited to solve the knocking mystery since his imagination was coming up with all sorts of terrible things! I have to admit, my own imagination is on overdrive right now, wondering if these birds have escaped from some Disney movie, and realizing quite clearly that I am a princess, have come to tell me to let them in so they can sing happy songs and help me with my sewing and mending.


More likely they've gotten so used to the birdseed buffet we used to provide with the birdhouses the boys built with their Grandpa and they want more. So I've added item 8,673 to my list of things to do: buy birdseed!

Happy Mother's Day in advance to all you Mamas! I'll have more on that subject, but I'm packing up the boys and we're heading to my own Mama's house for the weekend. The thought of spending Mother's Day without my husband who has made me feel like the Best Mom Ever for the last 11 years was more than I wanted to handle. And I gotta grab every last minute with my own parents while it's just a four hour drive instead of a 14 hour flight!
By Heather Rose-Chase at May 07, 2011