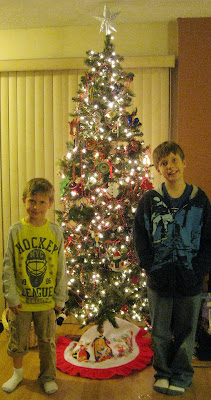 The great purge of 2011 is rolling along, somewhat painfully. Tonight I took five huge plastic bins filled with a lifetime of accumulated Christmas decor and ornaments, and whittled it all down to one medium sized box, which we'll ship to Macau. Everything else is in the Garage Sale / Craig's List / Give Away pile. It's good to see that pile growing, but it's also very hard.
The boys were bouncing a ball around in the driveway while I worked my way through box after box in the garage. I kept picking things up, holding them in my hands and repeating, "Let it go, let it go, let it go" until I was convinced that I could really let "it" go. At one point, the ball the boys were playing with went over the fence into the 15 acre park that our home sits next to. Ben said, "Uh-oh," and Nathan said, "Let it go, let it go, let it go," which made me double over in laughter. Kids listen to everything you say, even if they aren't necessarily paying attention!
My parents lent us the Christmas tree above about five years ago when we couldn't afford a live tree plus gifts. Each year we make like we're going to return it to them, and they insist we hang onto it another year. This time we really have to give it back since we won't be shipping it to Macau. Strangely enough, we really don't have any Christmas traditions that carry on from year to year, unless you count observing Hanukkah which we started doing a few years back when Benjamin insisted that we've always done it. The closest we've come to a "tradition" is having the same tree for the last five years! 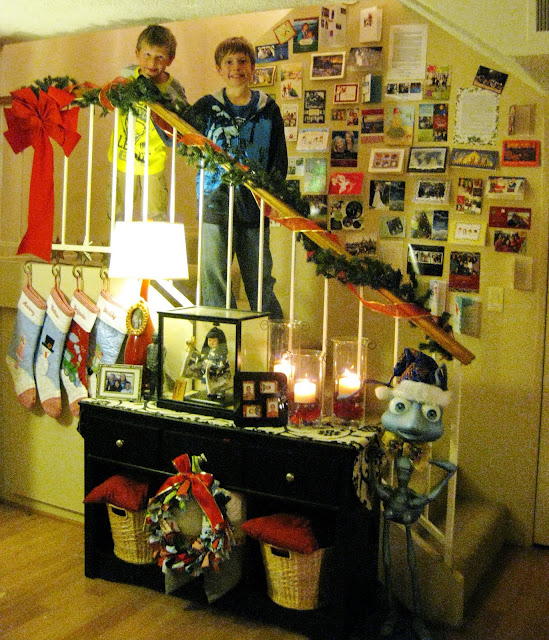 Even our stockings (seen above) were only purchased (on sale post-Christmas from Pottery Barn) a year or two ago, and we've never actually put anything in them. We kind of fail at having that one warm tradition that the kids will grow up to remember fondly and want to pass down to their families. Instead, we move them all over the world and assimilate ourselves into the cultures or traditions of the places and people we're with at the time.

I love the photo above... you see our pal, Flik, from A Bug's Life, which joined our family in 1997 when Michael went on a tour across the U.S. to promote the film. He's been with us all over, hanging out in the living room of whatever home we've lived in for the last 14 years, either delighting or freaking people out. You see the Japanese doll in the glass case that we purchased for baby Nathan in honor of Boy's Day in Tokyo. While most Boy's Day dolls depict fierce warriors, this doll represents a boy dreaming of the future, full of creativity and imagination. We bought it when Nathan was six months old, and it's remarkable that our choice fits our creative dreamer perfectly! You see a little photo montage of passport photos that were taken of all four of us in 2005 when we lived in Hong Kong and had to get visas to travel to Beijing to climb the Great Wall. Remarkably, all four of our photos turned out amazing (something I've never seen on a passport photo!) and I felt the need to get them framed. And further over to the left, you see a photo of us on the Great Wall, hanging from the lamp.

I actually pulled up Christmas photos with the intention of writing about how sad I was feeling about letting go of three decades worth of Christmas ornaments and decorations, and lamenting about how we're somewhat untethered when it comes to grounding family traditions that might get passed on through generations to come. But instead I'm reminded that instead of an annual turkey dinner, the opening of stockings at midnight on Christmas Eve, and my grandmother's famous pumpkin pie, I'm actually giving my family the whole wide world. There is no ornament or pumpkin pie recipe that could compare to the experiences we've had and that we'll continue to have in the next several years.

With that perspective, it's so much easier to let go of the stuff that I keep trying so hard to hold onto. I tend to think that if I let it go, I'm letting go of the memory associated with it or the person who gave it to me. And yet here I am, making my 13th move in sixteen years, lugging this burden of stuff around with me. You'd think I would've learned this lesson somewhere around move five or six... What can I say? Better late than never. Better now than on move 15 or 16. Better to let go now, so I can enjoy the present and look forward to the future instead of worrying about taking care of all this stuff that represents the past. And if there's a "tradition" I'd like my boys to pass on through the generations, please let it be that.

What are you hanging onto that you could let go of today?
By Heather Rose-Chase at May 21, 2011