Having the Talk with your kids

Michael was a major fan, and he forced me into it (although he'll say I went willingly). I have two favorite Star Wars memories.

The first: being a kid and walking into the movie theater at the beginning of Return of the Jedi seeing Han Solo frozen in carbonite (and then getting "thawed"). I stopped in the aisle and my little brother slammed into my back. But I was frozen by the image, just like Han Solo was frozen by the carbonite.

The second: when Episode III came out, we lived in Hong Kong. In theaters there you purchase an assigned seat, much like seeing a live show. We'd purchased tickets weeks in advance. When the day of the movie came, I had a terrible cold and was taking some very powerful cold medicine. But we had tickets for really good seats and we'd waited forever so there was no way I was staying home. The movie theater was packed, and the audience was absolutely silent the entire film. When the scene comes where they finally put the mask on Anakin and say "Henceforth, you shall be known as Darth Vader," I yelled out, "NOOOOOOOoooOOOOOOOOOOOOOOOOoooooooooooo!" Everyone in front of us turned around to look at me and Michael slid down in his seat from embarrassment. I can only blame the cold medicine, because it's not like I didn't know that plot point was coming, right?

Michael started the boys off on Star Wars young. They saw the first three films (Ep 4, 5, & 6) with him while they were preschoolers, and he read them lots of the Young Jedi book series, which they love. More recently they saw the later films (Ep 1 & 2) although we agreed that Ep 3 with it's PG-13 rating and its dark tones and ruthless killings needed to wait until they were older. We didn't discuss how much older. Privately, Michael thought "a few months older" while I thought "a few years older" and one night this winter when I was at rehearsal, the three of them popped in the Ep 3 DVD and Michael held the boys tight during the terrifying parts. I found out when he posted it on Facebook. *sigh* So now they've seen them all.

I saw this video and it cracked me up. I want to say we're not that bad, but... we probably are. Maybe the video will help you as you have the Talk with your kids as well.


Edited: When I picked the boys up from school, I noticed that they are both wearing Star Wars tees. How timely! 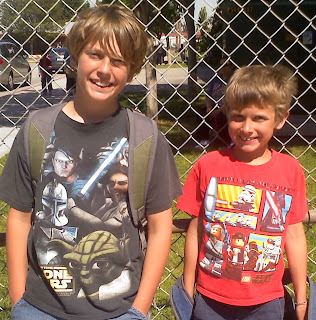