﻿
﻿ We carved out a couple hours to attend the first birthday party for my cousin, Austin. I met him minutes after he was born. My Aunt Jean (his Grandma, my Mom's sister-in-law) lost her husband earlier that year and all other family members were in school or working on the day of the scheduled c-section. My Aunt found that she was going to have to wait in the waiting room by herself, in the same hospital where my Uncle passed. When my Mom told me this, I ran across town to sit with her. No one should have to be alone in a hospital waiting room, even if you're waiting for a new baby! I've known about the party for months and as the date got closer and closer, I began to stress out about taking the time away from all the things I've got to do. But it was a Pirate party, and I've got two boys, so we went.

﻿
﻿ Compared to my husband's side of the family, my family is minuscule. My Mom had one brother, Jim, who married Jean, and had three boys, my cousins Jeff, James, and Jon. Jeff lives in Arizona with his family, but everyone else was at the party so I got to see everyone and dole out lots of hugs and answer lots of questions. For once, my boys were on their absolute best behavior, which meant I actually got to relax and enjoy some cake and adult conversation! On the Rayner side of the family, I was the only girl. When I was a little girl, my Aunt Jean delighted in my presence and let me play with an expensive heirloom doll and try on her wedding veil. I was such a girlie-girl, and poor Aunt Jean was surrounded by all these boys. I remember thinking about her when we found out that Nat was a boy. I drew a lot of strength from her! And when my Uncle Jim passed, I realized that a lot of how I am raising my boys is greatly influenced by how he raised his boys, my loud and boisterous cousins. ﻿
﻿ 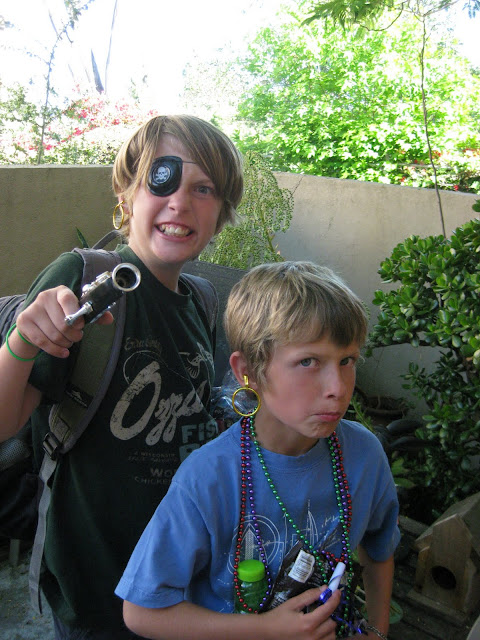 The boys got a lot of pirate's booty at the party. I've never seen a goodie bag so swollen with candy and treasure! But their favorite thing was the eye patch. They wore them all day and all night. I had to make them take them off for bed. Of course when I got up, there they were, watching TV, wearing their eye patches again!

I've been cutting their hair since they were born, but as you can see from the photo above, they haven't had a cut in awhile. With the house a maze of boxes, and a fundraiser for their school going on at the local Great Clips, I took them in for a pro job. 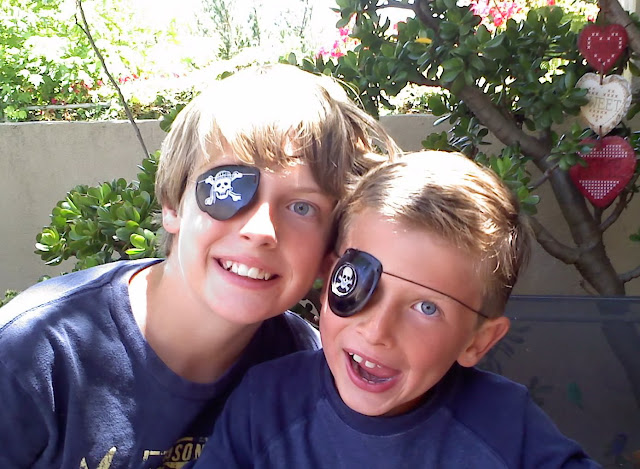 Nathan's hair is still long, which I'm totally fine with. But Ben went from a shaggy puppy to a walking Tommy Hilfiger ad with his very preppy 'do. I had to physically remove the eye patches so they could get their hair cut! Good thing I'm the kind of mom who allows (encourages!) imaginative dress up play in public! I never usually let them wear anything with skulls and crossbones, so I'm wondering if that's the appeal, or if they honestly just like pretending they're pirates? I know they both want to see the new Pirates 4 movie (with a PG13 rating I'm thinking no), so it could be that as well. No matter the reason, I'm happy to see them being silly, sporting smiles instead of tears. Aren't you?

P.S. Here's my favorite Tommy Hilfiger ad. I so want to be in this hip imaginary family! Ben will totally grow up to be that guy with the green sweater turtleneck and blazer. There's no one wearing enough black to be the person Nathan will grow up to be!