Michael is the Breakfast King around here. I've previously mentioned how my kids have to fend for themselves in the morning unless Michael is here to make French toast, eggs and bacon, or fluffy pancakes for them. I simply don't eat breakfast unless he makes it. Since he's been gone, the boys have eaten cereal, instant oatmeal, or frozen waffles each morning. They've mentioned a few times how much they miss Daddy's pancakes, but they've never asked me to make them.

On Saturday, I slept in for only the second time since Michael left. It was heavenly! When I finally came downstairs, the boys were curled up on the couch looking snugly, so I crawled in between them and chatted for a bit. It was almost noon, and although they'd already had oatmeal (Ben) and cereal (Nathan), they were both craving pancakes.

I did what any good mother would do in the absence of her expert pancake maker: took them out for brunch! 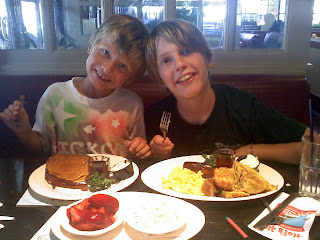 We went to Hof's Hut, a local beach-side burger place that serves a generous breakfast all day. Ben got a stack of pancakes and asked for a side of strawberries and whipped cream which he ate separately. Nathan got Daddy's favorite cinnamon roll french toast with sausage and eggs. The boys ate every single bite! And I got a breakfast quesadilla because me and Mexican food are real tight, any time of day!

I wanted to have a conversation about Michael and how much we miss him and what we should get him for Father's Day. The funny part was that there were three other families there that happen to be good friends of ours that kept stopping by our table to tell us how much they'll miss us and asking how we're doing without Mike around. Ben commented, "Wow, everyone here loves Dad!" And Nathan added, "But no one more than us!" It was sweet and funny and a really nice time with the boys.

Tuesday is the halfway point between Michael's departure and his return. So many people keeping commenting about how time is really flying by. I imagine for them, the people who only see Michael every now and then, it is. For me, it really isn't! June 30th just can't come soon enough! But on the other hand, with the large amount of work that needs to be done, June 30th is coming way too fast. It'll all get done somehow. One day at a time!
By Heather Rose-Chase at May 23, 2011