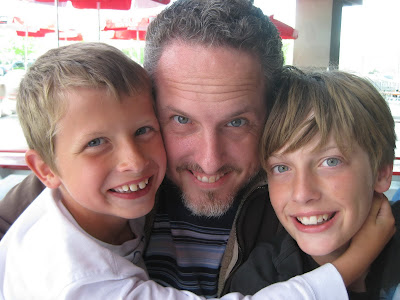 The two weeks we had with Michael went by at record speed. Last night we finished packing up the few things he needed, washed the clothes he planned to wear on the plane, and I gave him a quick 2:00 a.m. haircut. Since he'll surely need a haircut within the next eleven weeks, we figured it would be best to start him off with a fresh cut. At the 6:00 a.m. alarm, I went to wake up the boys and found Ben was already sitting up in bed, his cheeks wet from tears. I told him to go snuggle his Dad and then worked on waking Nathan. 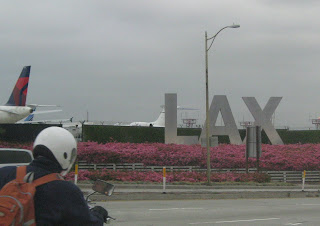 We got out the door at 6:30 and made our way over to LAX as a family. A lot of people had offered to take Michael to the airport this morning, but I wanted to do it myself for a couple of reasons. First of all, I didn't want the boys and I to have our last memory of Michael before we see him again in July to be one where he's walking out our front door. So much better, especially for the boys, if we can see him walking away into the airport. Second, I love him and wanted to spend every last second with him that I could.

Ben drew a picture of our family saying Bye Daddy and telling him how much we love him, and then he attached it to a lanyard so Michael could wear it around his neck, which he proudly did. 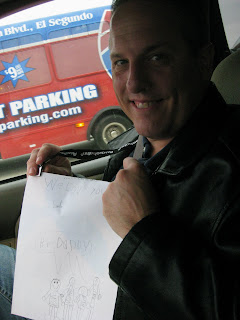 We were a pitiful sight, our family. We stood on the sidewalk outside of United Airlines, holding each other as all four of us just cried and cried. It's certainly not the first time we've been separated (thanks to touring productions, it took until our fourth wedding anniversary before we'd spent more time together than apart!), but it is the first time that the boys have been 10 and 7 and fully aware of what is going on and knowing just how long 72 days are. 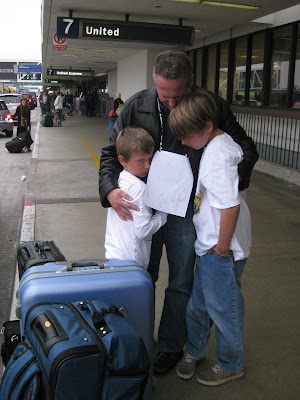 While we stood there sobbing in a big family hug, one of the shuttle drivers stopped her vehicle and got out and walked over to us. For a moment I thought she was the airport police there to shoo us off (you're not allowed to get out of your car at LAX, you just gotta move along). She put her arms around Michael and I, and let out a big sob of her own. Through her tears, she said she was sitting there in her shuttle, watching us say goodbye and she just couldn't stand it, she had to come wish us well and tell us that it was going to all be okay. It was so random, yet comforting.

Finally I got the boys back in the van and I gave Michael one last squeeze before I drove away. I could see him sobbing as he turned, and the boys and I were wailing before I even pulled away from the curb. 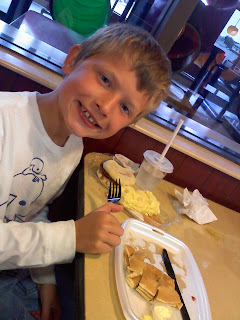 Knowing that today was going to be difficult, I lined up three things that I thought would give the boys a boost. After dropping Mike off, but before school, I took them to McDonald's for breakfast for the first time in their lives. I got them both the breakfast platter that came with pancakes, bacon, sausage, hash browns, eggs, and an English muffin. Both of them ate every bite. Then, I let both of them buy lunch instead of making it. This year they have each been responsible for making their own school lunches, including making the shopping list for what they want in their lunches. They beg all the time to buy lunch, but I almost never let them do it. They were thrilled. And finally, after school I arranged to go over to our friend Megan's house to visit some baby kittens that the boys could hold and snuggle and love on. Michael is horribly allergic to cats, so if the three of us were going to spend a few hours being close to kitties, today was the day to do it! They couldn't decide which of these three things were the best. Benjamin commented: Why does the very worst day and the very best day have to fall on the same day? 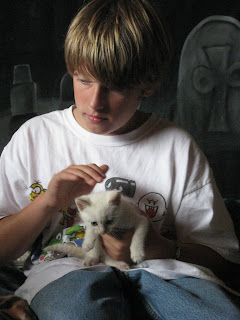 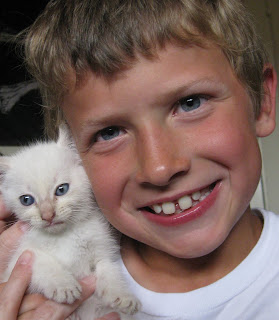 I know we're going to make it, but I feel like we all need some extra grace this week. No plans, just chilling. Michael's plane lands in Hong Kong at 3:00 a.m. tomorrow our time, and then he'll take the ferry over to Macau. I'm pretty sure I'll be able to sleep like the dead starting at 3:15 a.m. knowing he's safely back on land after his fourteen hour flight, but for now I'm just a zombie, with streaks of wimpy waterproof mascara under my eyes. At least the boys are playing nice and helping each other with their homework and chores. Am I foolish to believe that this behavior might continue? Please God, let it!
By Heather Rose-Chase at April 19, 2011