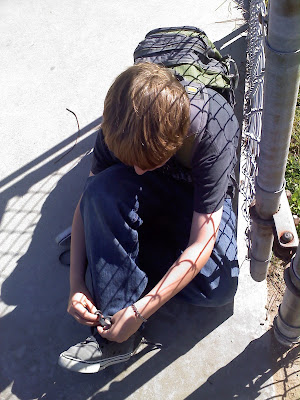 I've always purchased shoes for the boys that don't have laces. They either had Velcro closures or slipped on without the use of laces. Our favorites are the Merrell Jungle Mocs, which just slip on and and last until the boys grow out of them. Since we take our shoes off in our house (habit borne of living in Asian countries), it's always been so much easier to have shoes the kids can put on and take off quickly and easily and most of all, without my help.

A year or so ago, Benjamin got a pair of shoes that had laces. I can't remember where they came from... either my parents bought them or someone gave them to him. All I know is that I did not buy them. But Ben loved them! I think the novelty of being able to tie laces was a ton of fun for him. I didn't teach him how, he just figured it out on his own, a fact which he was happy to tell anyone who listened.

This week our friend got new shoes for the boys. Benjamin had been asking for a new pair with laces and he was so excited to pick out a pair he loved. Nathan, on the other hand, was being a lunatic and in the interest of getting quickly out of the shoe store, said he was happy with the first pair he tried on. Which happened to have laces. The first pair of shoes with laces that Nathan has ever had.

Nathan, at age 10, can't tie his own laces! We're trying to teach him, but I know he's embarrassed when he comes out of class with his laces untied and has to ask me to do it for him. Yesterday I tried to have him do it on his own (photo above), and he tied some knots that a sailor would be proud of. Great if you're on a ship, not so great for shoes.

I wonder how many other skills and developmental milestones my boys are lacking because I took the easier way out? I know my parents did some similar things while raising my brother and I. There are big gaps in my own skills. In the areas of cooking and housekeeping, for instance. It was (and still is!) easier for my parents to just shoo us kids out of the kitchen than it was to let us in and learn how to cook. Which meant that when I went away to college and got a tiny apartment of my own at 18, I had no idea how to cook anything. I could make a PB and J sandwich, but couldn't even make spaghetti. Had no idea how to cut up lettuce to make a salad. And housekeeping is a similar story. My only job growing up was dusting. And today, I'm a great duster. My mom is an ace house keeper. Seriously, I've never seen a cleaner, neater house than hers! But she never taught how to hand wash dishes or even load a dishwasher, how to vacuum, wash windows, or scrub toilets. My mother-in-law did a great job of teaching her kids these skills. I'm always amazed at how quickly and perfectly my husband can wash down our stove top. He does in 10 minutes what takes me (no lie) an hour.

To make sure my boys end up being good cooks and housekeepers (and sweep their future wives off their feet!), I've been diligent about teaching them these things. At age 7, Benjamin is responsible for the laundry of everyone in the entire family. He sorts like nobody's business! At age 10, Nathan gets the joyous task of doing the dishes and putting everything away where it belongs. We clean the house as a family, and everyone is proficient with a broom, dust pan, and vacuum. Both the boys are allowed in the kitchen and can read a recipe. Ben is a mini-chef and he would do fine if we stopped feeding him and he had to fend for himself. Nathan... well, he's less interested. That won't stop me from trying to at least get some basics into him.

It's hardest to teach my kids the things that neither my husband nor I have fully mastered. Things like patience, self-control, and staying calm.  I mess up all the time there, but I always sit down with the kids when I blow it and tell them that it's so important for them to practice these things now while they are young, so it will be so much easier when they are grown up.  We'll see how it goes. In the meantime, I've got to google tips on teaching a kid to tie their laces...
By Heather Rose-Chase at March 11, 2011

Email ThisBlogThis!Share to TwitterShare to FacebookShare to Pinterest
Labels: growing up, Nathan