We have a fourth grader in the house, and if you are living in California, you know what that means: the California Mission Project! 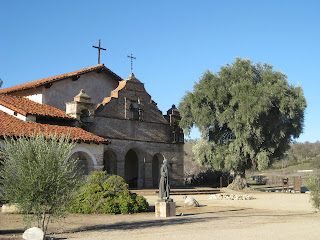 Mission San Antonio de Padua
My husband did one, but my fourth grade year was spent at a tiny private school in the San Fernando Valley and I completely missed out on it. The California Missions are such an amazing part of California history. There are lots of great resources on the web if you want to read up on them.
Most fourth grade classes in California have the students build a model of a Mission. It's become a little cottage industry, and craft stores here sell Styrofoam kits and countless accessories to go with them. Nathan's teacher gave the kids a choice of 5 or 6 different projects, not just limiting them to building a model. One option was making a video journal. Since Nathan recently saved up to buy himself a Flip video camera, this seemed like the perfect choice for him. He got to choose any Mission, but I encouraged him to go with Mission San Antonio de Padua in Monterey County. Three reasons: first, it's the only Mission on a military base. Second, San Antonio was a very musical Mission, teaching the local Native Americans how to sing and play instruments and read music, and Nathan likes music. And three, it's in the town where I lived during high school which meant a visit to the Grandparents' house and some catching up with old friends. It didn't take a lot to persuade him. Nathan heard "there are tanks on the military base..." and he was sold. The first three day weekend we had available was this past weekend, so up we went. 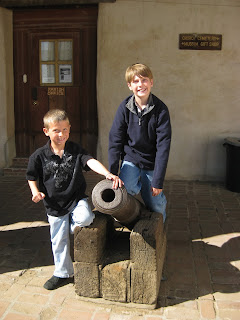 We stopped at Mission San Miguel on the way, since I knew it was tiny compared to Mission San Antonio and it would be good for Nathan to get that perspective. 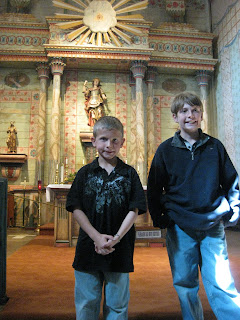 Interior of Mission San Miguel Archangel
Most impressive for the boys was the cemetery, with its elaborate marble headstones of people long departed. Back in the car, we headed for Lockwood, California, where the population has now climbed into the 400 range (per the sign as we entered), which is up from the 123 that resided there the four years I called it home. 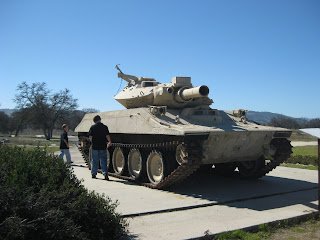 We entered Fort Hunter Liggett without incident and made our way to Mission San Antonio. It hasn't changed a bit since I was there last in 1993. And you know what? It actually hasn't changed all that much from when it was originally built back in 1771! Because Mission San Antonio has only had three owners and due to its location on an Army base in the middle of nowhere, it's still quite rustic and unspoiled and it's quite easy to see exactly what it would have been like 200+ years ago. 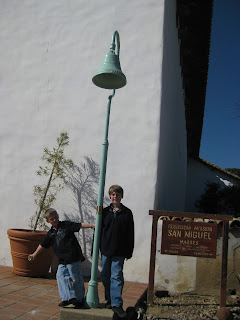 Nathan did a great job on his video, but you can tell he's far more accustomed to being behind the camera than in front of it, as evidenced by the many ummms and errrrs. However, ALL the words on the video are his own, we'd talk about what we were seeing and then we'd just film him telling us about it... totally unscripted. Also, try as I might, I could not get Nathan to pronounce "Padua" correctly (or any of the Spanish words for that matter). So it's "Pah-DOO-uh" here. I hope you enjoy it and maybe learn a little something. Nathan had fun, but I was thrilled that he actually learned so much while we were there. We all learn differently, but Nathan is a classic kinesthetic (tactile) learner, which means he does best when he can actually experience something.
Without further ado, please join me for a screening of Nathan's California Mission Project video:
By Heather Rose-Chase at February 21, 2011