My boys, as you may have noticed, dress in matching clothes quite often. This is a tradition (habit?) that goes all the way back to June of 2003 when I went from having one child to a pair of children. Here is our very first family portrait as a family of four. Although you can't really see it, both baby Benjamin and Nathan are wearing while collared shirts and tan shorts (overalls in Ben's case). 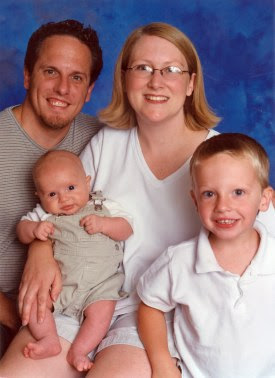 My urge to dress my children alike goes all the way back to my own childhood, when I saw Julie Andrews make clothing for the children in her charge from bedroom curtains, resulting in this: 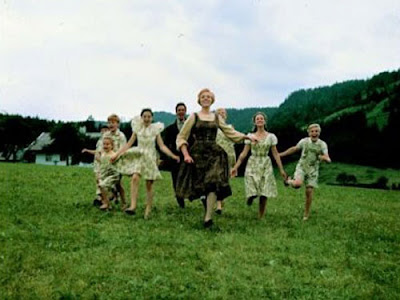 Having only a brother, I dreamt of the day I'd have two little girls that I could make dresses for, who would always be dressed alike. Of course, that didn't happen. 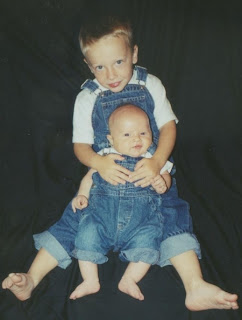 What happened instead is that my sister-in-law, Heather (great name!) had two little boys, our nephews Tanner and Braxton. She bought (or received as gifts) lots of amazing little boys clothes that matched or coordinated. When Tanner and Braxton grew out of their clothes, Nathan and Benjamin were the lucky recipients. I dressed them alike a lot, mainly because I happened to have a plethora of matching clothes to dress them in. 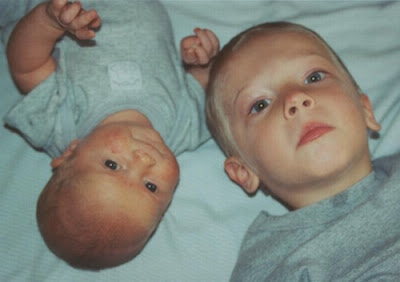 At the time Benjamin was born, we lived quite close to a Baby Gap Outlet. And if you have a baby boy, the cutest clothes on Earth to dress him in can be found at the Baby Gap. So I'd go find super cheap clothes at the outlet that matched, like the tees below featuring a little green snake. I think they were 99 cents apiece. Kinda cute on its own, but pair it with a brother also sporting a snake shirt? Way cuter. 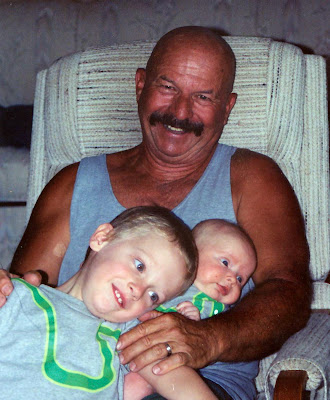 When we moved back to the Los Angeles area, I discovered an Old Navy outlet, and suddenly the boys were sporting lots of matching rugby shirts. 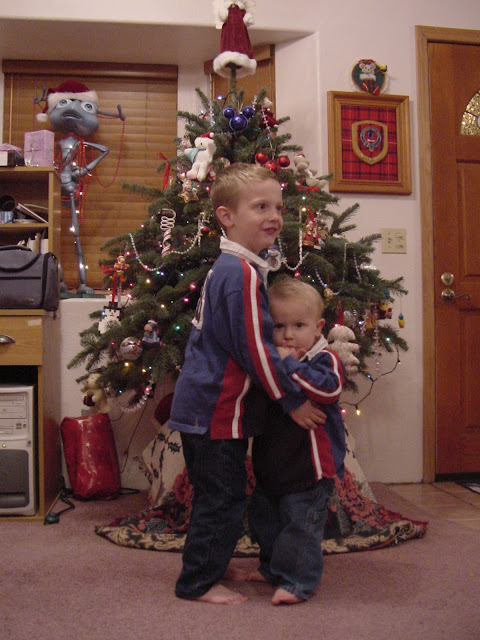 The family got in on the fun, and started buying matching shirts for the boys. 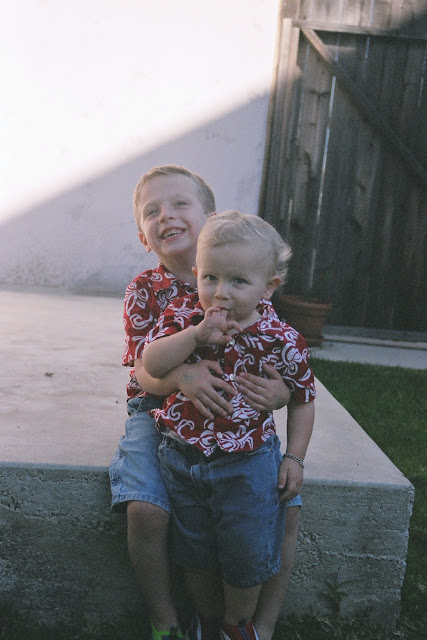 When we moved to Hong Kong, I purposely dressed the boys alike, generally in bright colors, because it was so much easier to keep track of them when we were out and about (not that they didn't stand out with their blonde hair). 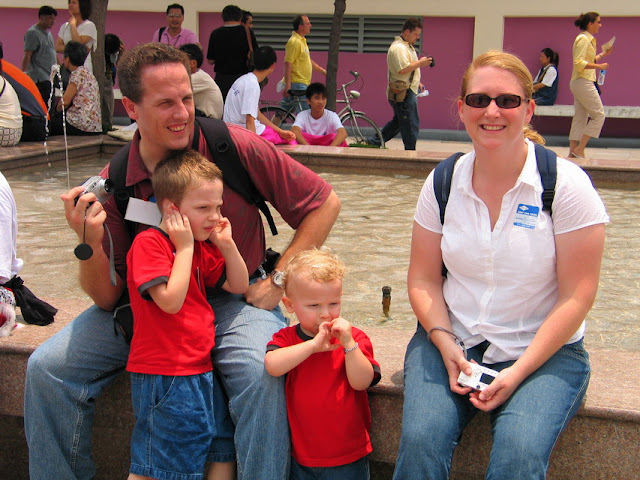 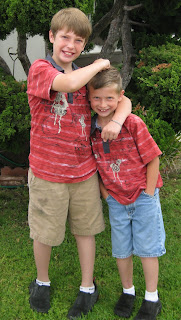 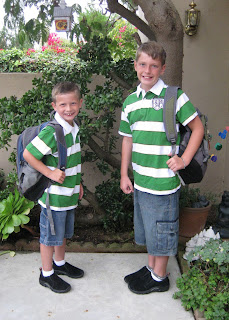 Now when I shop for a shirt for one of them, the other will inevitably ask if they can get one just like their brother's. My parents always buy them heavy winter coats (because we only ever need heavy winter coats when we visit them), and they always buy them matching jackets. These are their current jackets, worn over matching shirts at a Bakersfield Condors ice hockey game: 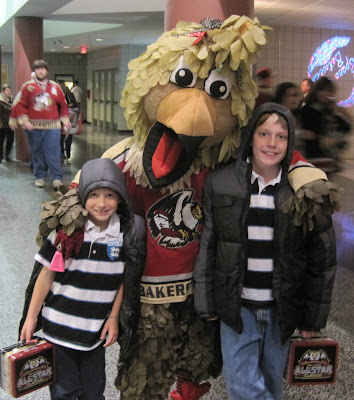 It doesn't stop at clothes! The matching has spread into their sleepwear! Although to be honest, we go to a Christmas pajama party every year at a friend's house, and I always pick up (or sew) cute matching Christmas pj's with that party in mind (Thanks cousins Emma and Rebekah for the Beyblades in this pic!). 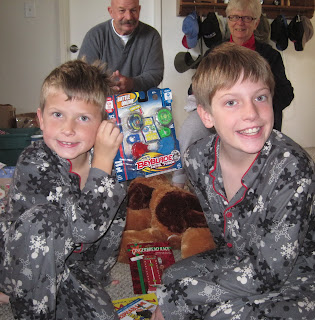 Friends who have kids older than mine say, "Just wait, they'll get sick of dressing alike and rebel against it." But you know what? They do it on their own. Even if they don't have an exact match, if Nathan puts on a green shirt, Ben will too. On purpose. Without any prompting from me.
The whole matching thing has become a little phenomenon I like to call Happy Matching Family. Because if a family is all dressed alike, they have to be happy, right? Okay, maybe not. But it does remind me of the awesome family portraits on Awkward Family Photos, which always make me laugh, and what is happier than laughter? Nothing!
Recently, we planned a Disneyland day with some friends. I jokingly said "What are we going to wear? We have to play Happy Matching Family!" And then all the girls squealed in delight and instead of just joking about it, I actually did something about it. I made a stencil of Mickey Mouse and some letters, hand painted tee shirts with everyone's names on them, and then appliqued on a hair bow or a bow tie according to gender, leaving Nat and Ben's plain. 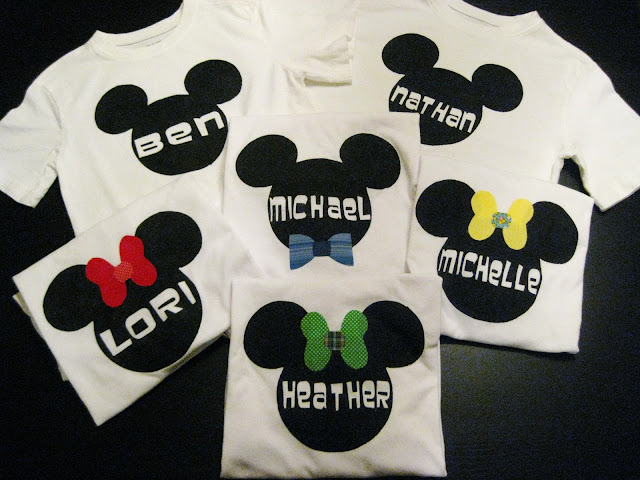 And then we all wore them, and got the bucket-loads of attention that a group of outrageous Disney fanatics wearing clever personalized Disney themed tee shirts deserve. Did the boys groan and shy away from the attention? No. No they did not. They cheered and squealed right alongside the goofy adults every time someone said, "Whoa! Those shirts are so rad! Where did you get them?" 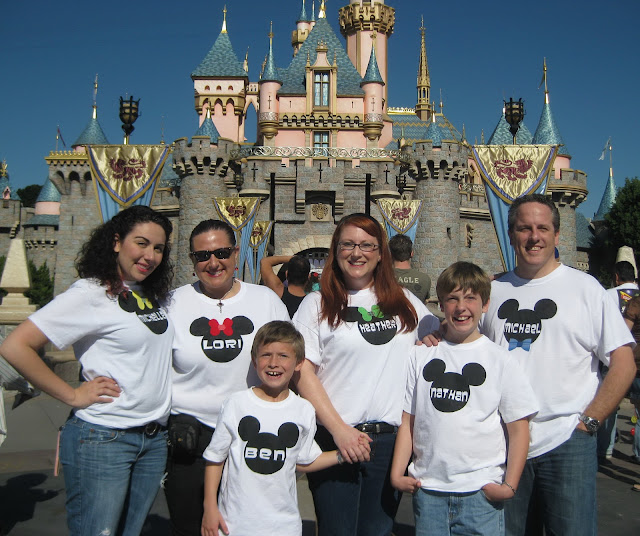 Yes, I know that Nathan and Ben and their habit of matching will (might?) end at some point. But I hope we can count on another few years of dressing like a Happy Matching Family at the Happiest Place on Earth. It's just more fun.
And if that photo above doesn't make you want to go to Disneyland, then I'm just not trying hard enough!
By Heather Rose-Chase at February 25, 2011