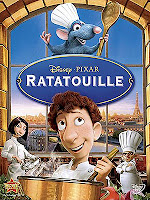 The husband and I were up late one night, folding laundry and flipping the TV channels. We paused on the Disney Channel and ended up watching most of Ratatouille. It's such a strange/gross/cute/funny movie, isn't it? My favorite thing about the movie is the character of the recently deceased  Auguste Gusteau, chef, television star, and author of a book called Anyone Can Cook. He was convinced that anyone could indeed cook, which is the inspiration for a little rat named Remy to end up as a chef. Ick. But kinda cool.
I didn't learn to cook until I was 18 and in college, living in a teeny-tiny apartment by myself. I had no idea how to do anything other than put a frozen entree in the microwave. A cousin of mine took me under her wing and taught me how to make a few things, including a recipe I called "Slimy Green Burritos." I made them for my husband while we were engaged, and he thought they were so good, he made up a song about them! "Oh yeah they're green! Oh yeah they're sliiiiiimy! Oi, Oi, they're burritos!"
Both of my parents are great cooks, they just didn't want us kids in the kitchen (they still don't! We get kicked out even if we just want to hang out and talk while they're cooking or cleaning the kitchen!). But considering I still feel handicapped in the area of cooking, and take absolutely no pleasure in it, I've decided to make sure the kids get plenty of opportunity to get in the kitchen and make things.
Ben is working on a cooking patch for Cub Scouts and part of the requirements involved choosing a recipe, preparing a meal, setting the table, and cleaning up. Ben chose to make a chicken enchilada dish. It's super easy to throw together and really hard to get wrong. 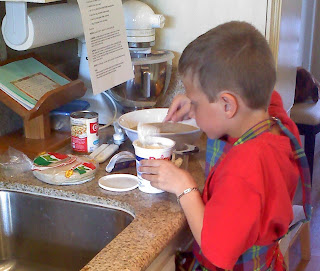 The only thing I helped him with was double checking that he'd done each step of the recipe correctly, and to put it in the oven and take it out.  The rest was all Ben! He was very proud of himself, but I don't think it was anywhere as close to the level of pride I felt in seeing my youngest son donning an apron and concentrating on doing a great job.
We got the recipe from a can of Carnation Evaporated Milk, which you can get at this link. The only difference is that we use green enchilada sauce instead of red. Because I'm not the only one around here who likes green! 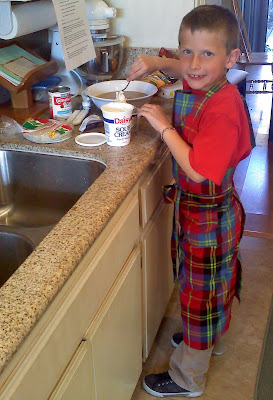