For the last several years, I've made a series of handmade ornaments to give as gifts. Did I make any for us to keep? Sadly, no. Maybe this next Christmas I will. Every year the recipients change, although at this point, everyone in my husband's family has received one. The only person with a complete collection would be our old next door neighbors. They are just so much fun to give handmade gifts to!

In 2008, I made these quilted style ball ornaments: 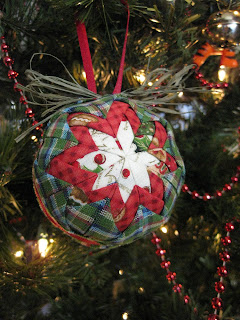 I was inspired by one my Grandmother Rose had made when I was a little girl. This is the one we gave our next door neighbor. We had several newlywed and newly engaged friends, so I made pairs of these with coordinating fabric for their Christmas gifts. I also gave them to my mother and father-in-law and my husband's brother and his wife, and Auntie Holly. All the "local" members of the Chase family.
In 2009, everywhere I looked I saw gingerbread man decorations. So, I made these: 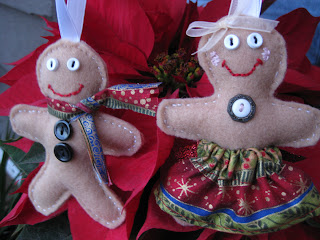 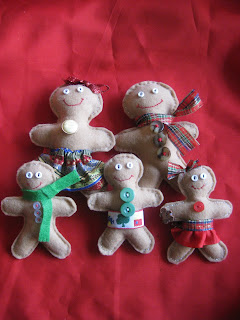 The pair on the top went to our next door neighbors, and the family on the bottom went to my husband's middle sister and her family. I also made a couple others that went to another set of newlyweds. Ben also got into the action that year and helped me with some of the hand stitching, as well as making a few that were 100% his own. He carried them with him where ever he went and even slept with them under his pillow until they were ratty and falling apart and now he wants to make some new ones.
2010 was a very cold year! Our summer never really kicked in until we had a couple hot weeks in September. And all Nathan has been talking about is snow, snow, snow. So this year, I did snowmen: 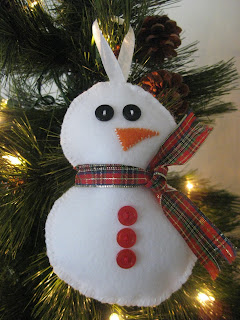 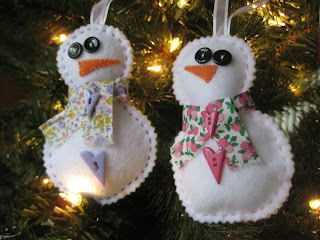 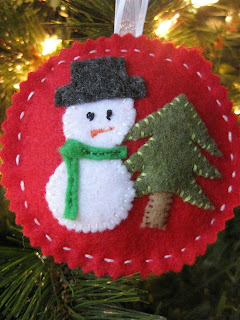 The top one went to my parents, the middle ones went to my husband's youngest sister's girls (fanatics for pink and purple), and the bottom one went to our old next door neighbors. And those four sum up the only ornaments I made this year, despite having a bunch of newlywed friends and family members. Everyone else got shut out. Wanna know why? Because of this: 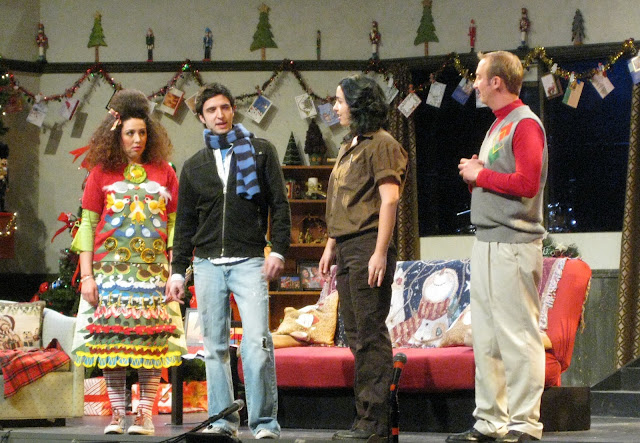 At first glance, it just looks like the amazingly talented Michelle A. Moreno, Jeff Braine, Katie Moloney, and Robert Skyler Payne, standing around onstage. Yes, this is the show I spent three months working on. But look a little closer:

See those lovely costumes? They were made by yours truly. Skyler's sweater was easy-breezy. One hour of appliqueing on some diamonds and stitching some gold outlines to get an off-center argyle look. Michelle's dress on the other hand... you are looking at 40 hours of hand cutting and stitching to bring you the glory of a dress decorated with each of the 12 days of Christmas.

Their characters are from North and South Dakota, and they are filled to overflowing with Christmas Spirit. When brainstorming what kind of "Ugly Christmas Sweater" Michelle's character might wear, the 12 Days of Christmas kept rising above the other ideas. So I got to work on the top half. I designed each of the Days myself, and cut them out of felt. Each one has some hand stitching accents to give them some pop. I got to the Five Golden Rings, and realized that this was an insane project. Insanely LARGE and time consuming. My time was already stretched between Japanese classes in the morning and rehearsals at night. So I gave up some sleep to hand cut and hand stitch some more. I brought the whole thing with me to my Parents' house over Thanksgiving, and worked on it there, too. I even sucked my Mom into it, who hand stitched each individual item to the sweater itself. The detail is crazy. I put blush on the Eight Maids a Milking, and hand-tied silver and gold bows to the ballet slippers that represent the Nine Ladies Dancing. Each Piper Piping has a red feather sewn onto his hand-cut hat. 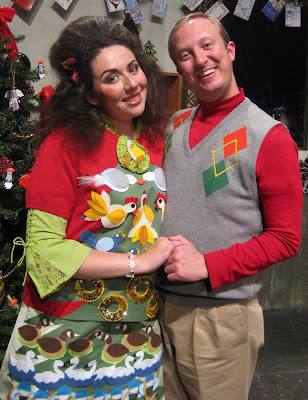 Yes my friends, you are looking at forty hours of work. By the time I was finished, I pretty much hated it. I thought it was ugly, and not in the "good ugly" way we were looking for. I thought everyone would hate it and say "go whip up something else." But I brought it to dress rehearsal and everyone's jaws dropped. At each of the six performances, the costume (which had a funny reveal) got applause. You'll never see me on stage, but each night I soaked up that applause like a particularly porous sponge. So that would be the reason I didn't make my usual dozen or so ornaments to give away. It was because I made 78 individual "ornaments" that went onto that costume! And it brought joy to about 1,800 people who saw the show, so I feel okay about not making more for my friends and family.

Of course, once the show was over, I still felt the need to make something to give to my loved ones. I was completely done with felt and tiny needles, So I broke out the really thick yarn and my biggest crochet hook and made 25 very chunky and warm scarves to give to the ladies in my life:

Of course, once Michael, Nathan, and Benjamin saw the many, many scarves I was making, they all wanted one, too. So I made one for each them in the slow, relaxing days following Christmas, letting them choose their own yarn: 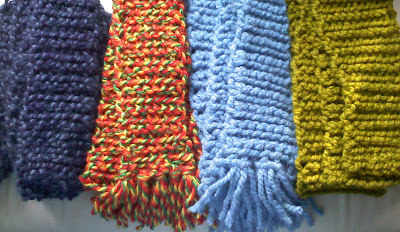 Left to Right: Michael, Nathan, Benjamin, and (because I've never met an ugly shade of green I didn't love) Mine.
I've made a bunch more to send out to certain people I know with January birthdays and people who live in places where the high today is 9F. That's just wrong. They need more than a scarf, but a scarf is what I've got, so that's what they're getting. Brrrrrr...
I think for next year, I'll abandon the felt ornaments and do something with wood. I'm already sketching up ideas now! And maybe one of these years I'll make some for us to keep!
Merry Christmas and Happy New Year!
By Heather Rose-Chase at December 30, 2010 3 comments: Links to this post 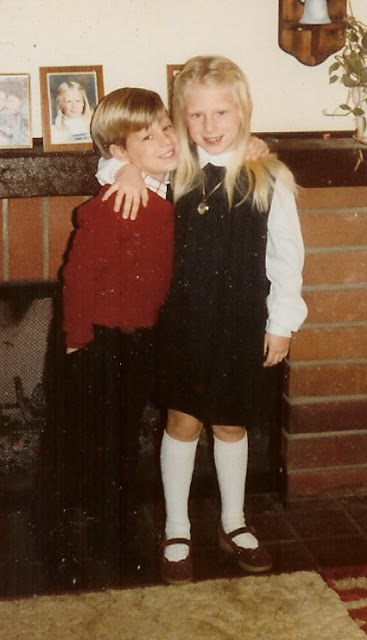 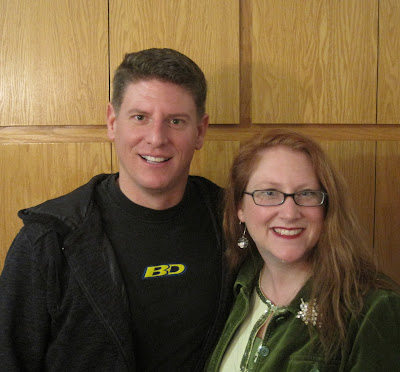 Still as cute as ever, my little brother and I.
By Heather Rose-Chase at December 26, 2010 No comments: Links to this post

This year I celebrated turning 25 for the 11th time! Hooray for birthdays!

My husband started a tradition of having a birthday breakfast on my actual birthday, Christmas Eve. No one can ever come to a regular birthday party or a dinner on my birthday, but we always manage to find a few people who can join us for a yummy breakfast complete with cake. It's always different people every year, since Christmas Eve isn't a work holiday for most people. We've been doing this since I turned 25 the first time! Actually, that was the very first birthday party that I've ever had in my life, thrown as a surprise by my husband. Christmas Eve is not a very good birthday to have if you're the type of person who likes to celebrate it with a lot of people!

This year we went to King's Hawaiian Bakery and Restaurant, which serves the very best breakfasts on Earth. Go ahead, you can ask the twenty-something people who showed up and ate breakfast there with me: 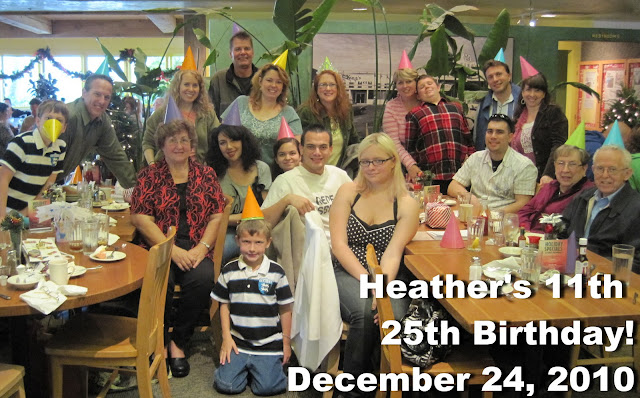 And then there was cake. Yes, I know cake for breakfast seems a little silly, but remember, I'm a girl celebrating my 11th 25th Birthday! There's a bit of silliness about me. Breakfast Birthday Cake: 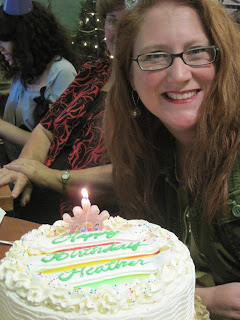 Yummy! After my birthday breakfast, we made the four hour drive up to my Mom and Dad's house. My Dad makes me delicious birthday tacos every year. They are my favorite. And of course, there was another cake. Two cakes in one day? Yes. Yes indeed. Because I like cake. A lot. 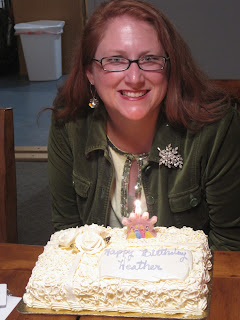 And you know what was really cool? My little brother showed up at my parents' house to celebrate with me.
Best. Birthday. Gift. Ever. 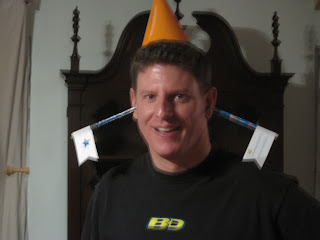 He will kill me if he sees this photo. Hoping he doesn't read this blog!

It was a great day. I feel so blessed to have so many people who love me! After a day filled with the warm glow of so much love and attention, it made me really think about the many fabulous people in my life. And it made me wish that all of them could have the same feeling of being loved that I felt on my birthday. With that, I decided that one of my New Year's Resolutions for 2011 is to make sure the people in my life know that I love them. Because I don't think there's anyone who hears "I love you" enough. I get to hear it a lot, but I never tire of it, and I crave hearing it even more! So get ready friends and relatives, because I'm going to be spreading the love in 2011!
By Heather Rose-Chase at December 25, 2010 No comments: Links to this post