We've got a ten year old in the house. It's a bizarre feeling, having been a parent for a decade. I mean, I can't possibly be old enough to have given birth ten years ago, right? That's just crazy. But enough about me.

This has been an incredibly difficult year for my oldest son, Nathan. Our whole family is struggling as we figure out new territory that none of us are really ready for. Although, truth be told, Nathan has been incredibly difficult since the moment he was conceived. My pregnancy was filled with nine months of daily (if not hourly) vomiting, necessitating many hospital visits to get hooked up to an IV to rehydrate. My labor was 40 hours of excruciating pain (he was sunny-side up, causing misery that not even an epidural could touch), followed by a C-section. Certainly not anyone's dream first pregnancy and delivery. But there he was, almost ten pounds of beautiful, bouncing, blond-haired, blue-eyed baby boy, and I was instantly smitten. He was, and is, a child of extremes. Everything is bigger and louder when he's around. His lows are so low that everyone wants to cry right along with him. And his highs are so high that he can completely change the mood of a room filled with people just by entering it. Many times I've wondered if I was going to make it another year (or week, or sometimes hour) being Nathan's Mom. How am I going to make it, I've asked myself more times than I can count. And yet, here we are with ten years of experience in parenting Nathan. Nate the Great. The Nathan-ator. Natorade. The boys with a million names. Who I'm still very much smitten with. We're all better for having him around, despite recent struggles. And we've all grown so much. And speaking of growth, take a look at this: 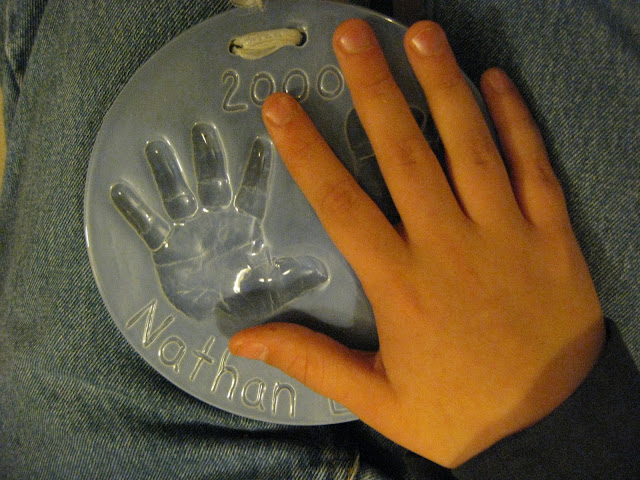 I handed this plate to Nat to take the photo, and he sat there transfixed. I didn't even have to tell him to put his hand next to the imprint of his two week old hand, he did it himself, with awe. Nathan's hands are almost as big as mine. His feet are the same size. He wants to wear my Doc Martens. I'm not willing to share $100+ footwear with the boy who likes to scuff his shoes for fun. And he's half an inch shy of 5' tall. Wow.
For his birthday, we got him a Flip video camera. He saved up half the money, used his birthday money from the Grandparents and Auntie Holly, and then we paid for the rest. He's made hours and hours of video clips. It's so interesting to play them back and see from his point of view the things that are interesting to him. He likes to set up his tripod and film himself playing video games, narrating what he's doing for the audience, giving tips and tricks on how to navigate the different levels of Super Mario Galaxy 2 for the Wii. Or chasing his brother through the house, screaming like a monkey:
Ah yes, cinema gold! Good thing the Flip camera is a sturdy thing with no moving parts!
Also, for his birthday, we got tickets for Michael and Nathan to go see a Kings game at the Staples Center. We are not an athletic family. We don't play sports, or even watch sports. But Nathan has somehow become a fan of ice hockey. So tickets for Nat and his Dad to go see a game together ended up being a great gift, even if the Kings lost. 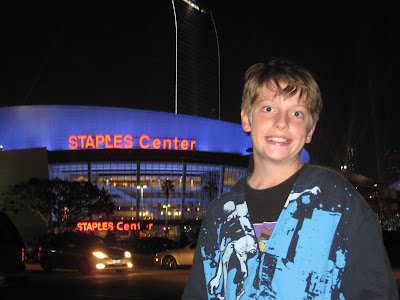 During the month of November we happened to be in Anaheim near the place that we lived while I was pregnant and where we brought him home from the hospital after he was born. We drove around until we found it, and then took a photo of him. 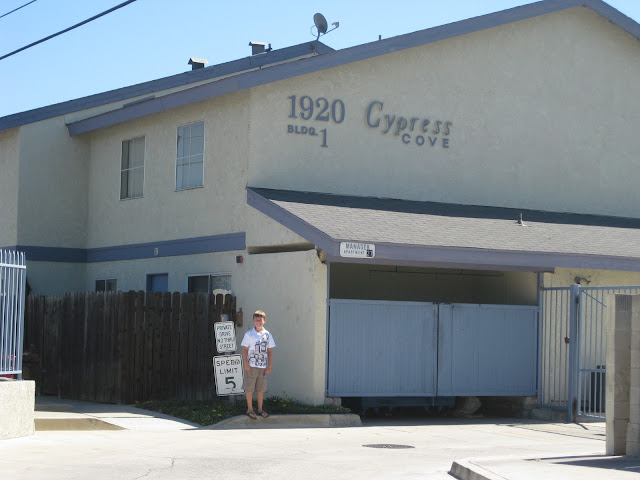 It was a little two bedroom + loft townhouse, and not much to look at, but it is the place where we went from being husband and wife to being a family. Nathan only lived there for ten weeks, and then we all jumped on a plane and moved to Japan. But he said he was pretty sure he remembered living here. Funny kid.
Happy Birthday, Nathan! You are the light of my life and the spice in my spice cake. Life would be dull without you. Quite dull indeed.
By Heather Rose-Chase at November 19, 2010