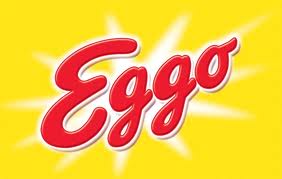 My husband is a breakfast evangelist. Which means that when he's not telling people about the benefits of eating breakfast, he's either eating it himself or making it for others. If he doesn't have breakfast, he becomes faint and headache-y. Me on the other hand, I can take it or leave it. But I only take it when someone else is making it. I'm not a morning person, and if I had a choice of taking 15 minutes to make and eat breakfast or spending those 15 minutes in my luxurious bed, snoozing... well, bring on the Zzzz's. In addition to that, my stomach is rarely ready to have anything to digest before 10:00 a.m. Of all my body parts, brain included, my stomach definitely takes the longest to wake up.

When we had kids, my lifestyle choice of not consuming breakfast was put in jeopardy. Because children have to eat. At regular intervals. You've got to feed them, even if you just fed them an hour ago. They insist on it. If you don't feed them, they complain, both with their words and their terrible attitudes that come from being hungry and cranky. So I had to set aside my breakfast reluctance and at least pull something out for the kids.

From an early age, they could tell the difference between a Daddy breakfast and a Mommy breakfast. Daddy makes fluffy pancakes, perfect French toast, scrambled eggs with pepper jack cheese and lemon pepper, and crisp bacon. Mommy points to the pantry and says, "the cereal is in there, don't spill the milk."

Because my husband is not only a breakfast person, but also very much a morning person, he always leaves plenty of time to get up, get dressed, gently wake the children and supervise their morning routine, make breakfast, and cheerfully get them out the door to school. However, when he's not around and the task falls to me, it's a much more hectic and crazy experience. I stumble out of bed, lurching down the hall like Frankenstein, one (or both) eyes still closed, growling at the children like a zombie cheerleader as I go, "Let's go let's go let's go let's go."

On those crazy mornings, there never seems to be time for breakfast. As I forcefully shove the kids out the door, they cry but we haven't had breakfast! We'll starve! Tired of hearing this refrain, I invented Car Waffles. While they get themselves buckled in the car, I pop a couple of Eggo Waffles in the toaster. When toasted, I wrap them in a paper towel, rush out the door, and present them to the boys, to eat in the car on the way to school. At first, it was exciting and fun... oooh Car Waffles! How exotic! But then Daddy ruined this fun by actually making them waffles at home one morning. His were dripping with melted butter and bathed in golden syrup. Much more appealing than a waffle wrapped in a paper towel. So the next time I went to make Car Waffles, there were groans and grumbles of protest... we want syrup! And a plate!

Grrrrr, if you want breakfast, this is what you get said the anti-morning Mommy cheerleader zombie.

So what did I do to close the ever widening gap between how awesome Daddy is in the morning and how, um... not awesome Mommy is? Well, I taught them to use the toaster themselves. Now when Daddy isn't here in the morning to give them the positive morning experience that every child deserves, they bound out of bed and race to the kitchen to be the first one to pop their Eggo's into the toaster. I still lunge stiffly down the hall, gruffly instructing them to brush teeth and grab sweaters, but at least breakfast isn't the sore point it used to be. And instead of feeling bad that I'm not the warm and fuzzy Mommy who makes sure the kids have a well rounded breakfast to start their day, I'm feeling good that I'm teaching them self reliance and how to meet some of their own needs. Yeah, yeah, self reliance, that sounds good.

Oh look, it's almost 10:00 a.m. Time for me to eat something and clean up the syrup the boys spilled all over the table when they made their waffles this morning. Small price for breakfast peace, I say.
By Heather Rose-Chase at November 10, 2010