Today my house was filled with bees. I was minding my own business, printing payroll checks, singing along with the radio, when I heard some serious buzzing. I was a little surprised to see a bee in the house. After all, the windows were open but they all have screens. I quickly opened the sliding patio door and did some jumping and dodging, hoping the bee would understand my little interpretive dance and make his way outdoors. He did. Big sigh of relief. I double checked all the screens and left to pick the boys up from school.

We came home to find many more bees buzzing around the living room. They were having a little bee party in our absence. I didn't jump or dodge, I screamed like a teen horror film queen, pushed the boys out of the house, and slammed the front door closed behind us. This particular reaction may have frightened the boys just a bit, judging by their fearful expressions. I tried to calm down so I could calm them down. I sat on the front porch, pondering what to do while they stared at me speechlessly with eyes wide open. Tuesdays are Michael's really late nights, so it's not like we could keep sitting there on the porch until he came home at 10:00 p.m. to let him deal with it. Something had to be done.

I left the kids in the driveway and went back in the house. I pulled on a long sleeved sweater and pushed open the back patio door again. While I was standing there trying not to hyperventilate, I noticed more bees coming in from the fireplace. Not good. I went back to my perch on the porch to think some more. I thought of Winnie the Pooh, always thinking about his “Hunny” and trying to outsmart the bees. I got a little comic relief when I noticed that the boys were hiding behind their backpacks, cowering in fear. 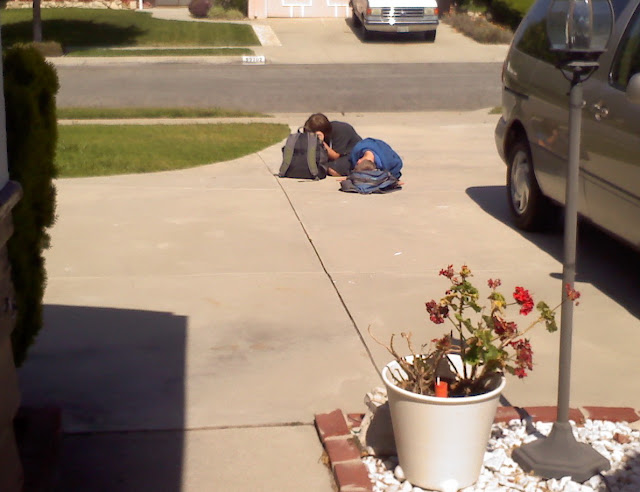 I asked them what they thought we should do about the bee situation. Benjamin suggested we move to a new house and start over. Nathan suggested we throw a bomb in the chimney and blow up the bees. I decided the key was to somehow block up the fireplace. I searched around in the garage for something fireplace-shaped, but came up empty. Then I saw the Duct Tape and realized I could just cut open a big black Hefty bag and tape it over the opening.

I left the boys outside again and got to work. I could hear the bees in the chimney which made my hands shake as I tried to tape the plastic to the brick. I chanted please-don’t-sting-me-please-don’t-sting-me while the boys stood on the porch, calling out, "We love you, Mommy! You're so brave!" I finished my work on the fireplace, did some more interpretive dancing to get the remaining bees out of the living room into the backyard, and then let the kids back in the house. They said I was their hero, fighting the bees like that. They gave me hugs and kisses without me requesting them.

Michael just got home from work. I think we'll pull off the plastic, light a nice fire, and then sit on the couch while I tell him about how I saved the whole family, maybe even the whole neighborhood, with my quick thinking and heroic actions. Of course, he'll just laugh and say, "So how loud did you scream?"
By Heather Rose-Chase at June 16, 2010